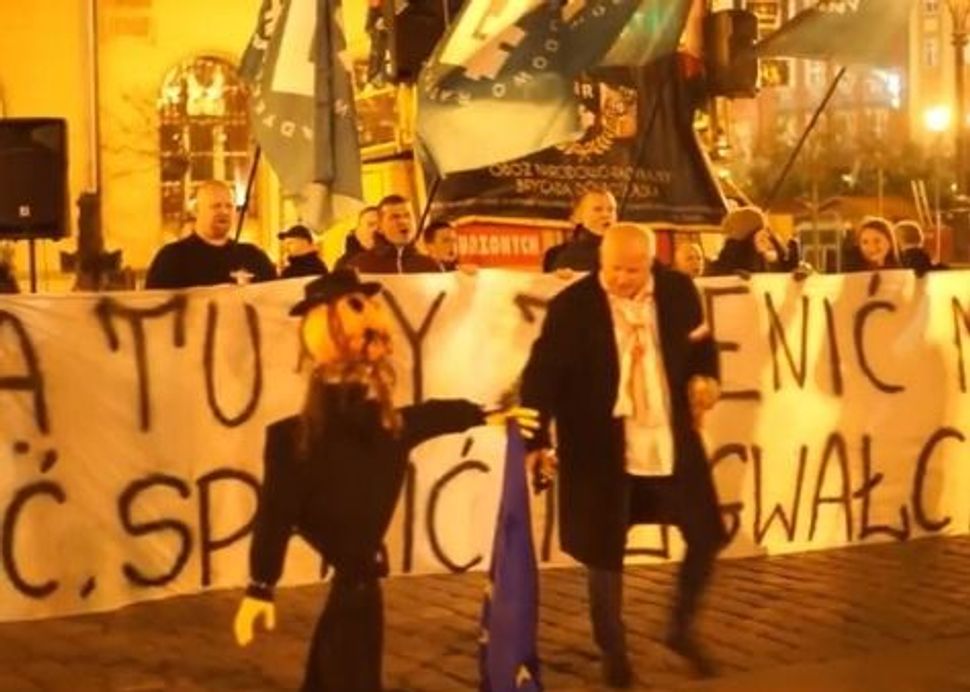 Poland’s B’nai Brith has denounced the burning of a Jew in effigy during an anti-refugee rally. The anti-Semitic act followed tirades against Muslim refugees at a rally in Wroclaw, a major city in southwest Poland.

“Raped, beaten and murdered by the Islamic savages,” the Polish nationalists shouted in the market square this week. “Do you want it on our streets?”

B’nai Brith president Sergiusz Kowalski denounced the burning of a replica of a Haredi man during the rally as “a gesture from the worst nightmare of history.”

“This absurd paroxysm of hatred and anti-Muslim xenophobia assumed unfortunately, traditional for Poland, an anti-Semitic form,” he said.

Police provided security but did not intervene to stop the anti-Muslim hate speech that is a violation of Polish law. Kowalski urged the prime minister to not allow police to passively stand by at racist demonstrations.

Polish analysts explained that nationalist demonstrators likely conflated enmity to Muslim refugees and Jews because they are both traditionally viewed as outsiders by some Poles.

“It’s quite simple to understand the mob’s thinking,” said Konstanty Gebert, a journalist and Jewish activist. “The Muslims are not regarded as ethnic Poles and Catholics, and the Orthodox Jew is seen in the same way.”

The mayor of Wroclaw, Rafal Dutkkiewicz, said he deplored the racist demonstration and asked for a police investigation. Gebert said that stand was not enough.

Bishop M. Cisio, chairman of the church’s commission for dialogue with the Jews, denounced the burning of the Jew in effigy in an email to Michael Schudrich, the Chief Rabbi of Poland.

The government did not reply to the Forward’s request for comment.

Islamophobia is widespread in Poland, and the victorious Law and Justice party used its opposition to Muslim refugees effectively in the election campaign. A party leader, addressing the Polish Sejm, or parliament, said that Muslim refugees should not be allowed to enter Poland because they carry contagious diseases.

“This (the anti-Semitic act in Wroclaw) was something we didn’t see before in the anti-refugee panic,” said Michael Bilewicz, associate professor of psychology at Warsaw University. Previously, the bigots just targeted Muslims, he said, although the level of Polish anti-Semitism is high.

“Wednesday night in Wroclaw we saw that it can be linked to any other form of prejudice,” said Bilewicz, including anti-Semitism. “It was the stereotypical way of depicting the Jews, back to the Nazi times,” he said.

What troubles Bilewicz the most is that there was no police reaction to the hate crime, despite laws that are supposed to prohibit it.

Bilewicz regrets that the police have become desensitized to prejudice because anti-Muslim hatred is commonplace in public discourse.