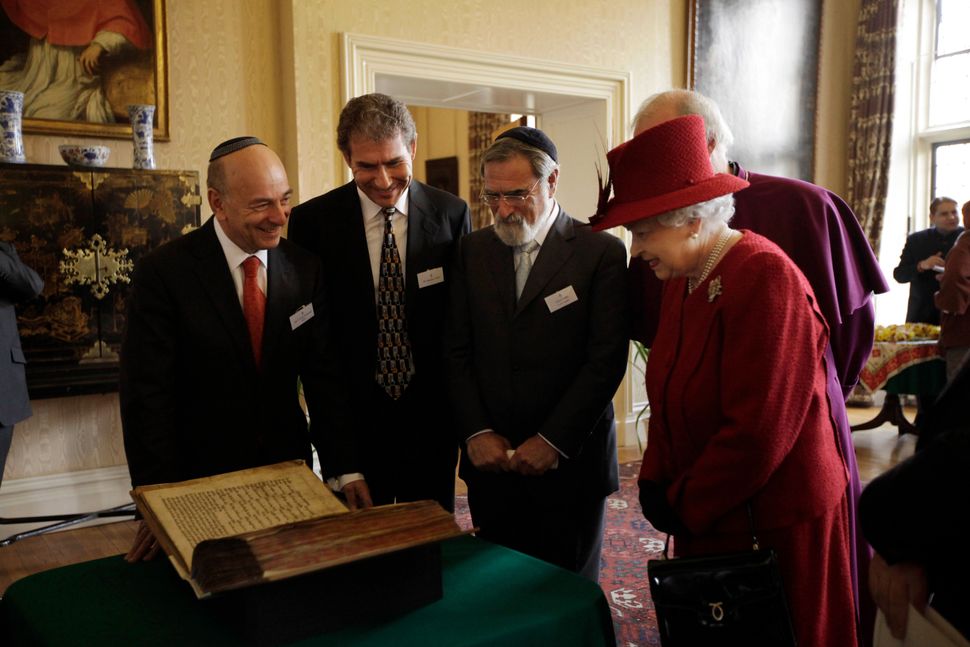 The Royal Treatment: Queen Elizabeth II looks over the Codex Valmadonna I book, from Lunzer’s collection, at Lambeth Palace in February 2012, as Jewish communal officials look on. Image by Getty Images

The world’s most important private collection of Jewish books and manuscripts will be broken up soon, contrary to the original wishes of its founder, at an upcoming auction at Sotheby’s.

On December 22, 12 selected pieces from the Valmadonna Trust Library — an unrivalled library of some 300 handwritten Hebrew documents and 13,000 rare printed Hebrew books, with some dating as far back as 1,000 years — will go on sale in New York.

The collection was assembled by Jack Lunzer, an industrial diamond merchant from Britain, who previously sought to sell it, but with stipulations that the library only be sold as a whole and kept available for scholars. Lunzer also stipulated that the buyer must himself agree not to break up the collection through subsequent sales.

But Lunzer is now 91 and suffers from dementia. And over several years the library’s trustees, who now control the collection, were unable to obtain the price they sought for it while maintaining Lunzer’s stipulations. They are consequently moving to sell off some of the rarest and highest-priced books individually.

Scholars had earlier taken reassurance from Lunzer’s original conditions, which guaranteed them and those who rely on their research continued access to the collection. It’s been available to scholars since it has been at Sotheby’s. Now, some are deeply saddened.

“It would be a terrible loss to the Hebrew book lore to have the rest of the printed book collection dispersed,” said Brad Sabin Hill, the curator at the I. Edward Kiev Judaica Collection at George Washington University. “I would consider that to be unfortunate.”

The Library’s trustees defend their decision to sell some individual books and manuscripts and override Lunzer’s stipulations as an effort to make the rest of the Library more affordable to sell as a whole. Though there has been great interest over the years, the collection as a whole proved too expensive and expansive for both private buyers and institutions. Margaret Rothem, Lunzer’s oldest daughter, said that Lunzer had been informed of the trustees’ decision, though he was now unable to meaningfully participate in it.

David Redden, the chairman of Sotheby’s book and manuscripts department, said all the money made from the auction will go to the trust. But he didn’t know how the trustees would spend or allocate the funds once the library was sold off, or whether the trust owned other collections toward which the funds might go. Efforts to reach members of the trust’s board were unsuccessful.

Lunzer amassed the rare artifacts over a span of 50 years. He traveled to the far corners of such countries as Italy, Spain, Turkey, Portugal, and to cities such as Amsterdam, where ancient printing presses secured works on vellum and silk paper from the 1400s through the 1700s.

“I love these books with my heart and soul,” said Rothem, who explained that she had often accompanied her father to towns so remote that she still doesn’t know the exact names of some. She said this lifelong hobby filled a void for Lunzer after his wife passed away at 52 in 1978. He often sat alone in his library into the wee hours of the morning, poring over research books to decipher the details about manuscripts he had his eye on.

The Library is considered a collection of vast yet meticulous beauty and scholarly intellect. Many manuscripts are dressed in gold leaf, painted with picturesque 18th-century scenes or adorned with intricate borders and illustrations.

Several years ago, when Lunzer resolved to sell the Library, Sotheby’s brought the works to New York from Lunzer’s house in London, where they had been organized by region — 16th-century Italian books in the study, volumes from India in a house in the garden. The empty shelves were then filled with faux wood books to appease the hollow feeling their removal left behind.

In 2009, prior to the auction, Sotheby’s opened the collection to the public. Lines of 3,000 visitors a day wound around the block. At the time, some lamented the possible loss of these rare treasures.

“While we do not yet know what will happen to the library, its possible disappearance as an integral collection would be a colossal loss to Jewish culture,” wrote David Stern, a professor of Classic Hebrew Literature at the University of Pennsylvania, in a December 2010 opinion piece for the Forward.

Shortly before the collection went on the block, Rothem asked Redden, the Sotheby’s official, to open up the library privately for her so she could say goodbye. She reached into the glass cases and stroked the leather spines while inhaling their scent.

In 2010, the collection was sold to an anonymous bidder who met or exceeded the base asking price of $25 million. But when the bidder balked at the stipulations accompanying the sale, the offer was rescinded.

Since then, Sotheby’s has struggled to secure a new owner for the collection, and tried, without success, to sell it in its entirety. The auction house’s difficulty in doing so was due in no small part to the collection’s exceedingly high valuation of $30 to $40 million.

Redden also spoke with numerous private collectors, but none wanted to acquire upward of 11,000 books and manuscripts. Many of them were only interested in individual pieces.

“It wasn’t going to happen in a timely fashion,” he said about selling the Library. “I think people respect the fact that we tried to sell the collection as a unit.”

“It has made it difficult for any one person to absorb,” she said. “And for the institutions, it was a big sum of money.”

Rothem, who is not a trustee and said she played no role in the choice to sell the items, supported Sotheby’s move to auction off the 12 pieces individually, calling it “a good decision.” The 12 books can be purchased together or alone.

The December 22 sale, which Sotheby’s is calling Sale I in anticipation of future auctions, contains two of its most prized items: a copy of the Bomberg Talmud and a handwritten Pentateuch from 1189. Redden said the auction house wanted to build excitement by offering these two treasures in the first round.

The Talmud, originally printed by Daniel Bomberg, a Venice-based Christian, from 1519 to 1539, is considered to be one of the most important documents in the history of Hebrew printing.

“It changed and revolutionized the way Jews studied this book,” said Mintz. The particular copy in the Valmadonna collection, estimated at $5.7 million, is one of 14 sets in the world and for centuries resided at Westminster Abbey in London. With the same dedication Lunzer gave to his other acquisitions, he chased the Talmud after becoming aware of its existence in 1956. He secured it 25 years later when he acquired a 900-year-old copy of Westminster’s charter and offered it in exchange for the Talmud.

The Pentateuch, estimated to sell at $2–4 million, is the only Hebrew text to survive after King Edward I ordered the expulsion of Jews from the British Isles in 1290.

Other items for auction include a 1737 Viennese miniature manuscript of Grace After Meals, a Samaritan Torah scroll from Israel from the 12th century and a 1401 Italian Hebrew Book of Psalms.

“I think they belong to the Jewish people and kept intact,” said Stern about the printed books in an interview with the Forward.

Mintz echoed that sentiment and clarified, “To be able to sell the monumental manuscripts doesn’t take away from the uniqueness of the collection.”