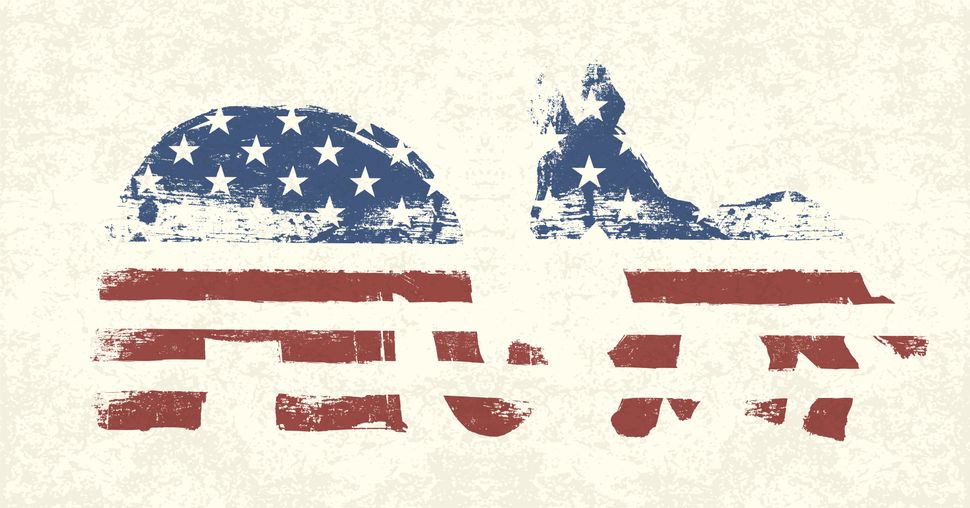 In this year’s Forward salary survey, as in previous years, the head of the Republican Jewish Coalition is one of the top-paid CEOs in the Jewish world. But for the first time, his Democratic counterpart doesn’t appear at all.

That’s because, for the first time, RJC executive director Matthew Brooks has no Democratic counterpart.

The National Jewish Democratic Council, it turns out, has shorn itself of all staff and outsourced its activities to a Washington, D.C. public relations firm.

In the last presidential election, almost 70% of Jews voted Democratic. But you would never guess that from the scale of the two parties’ respective political operations targeting the Jewish community.

From an expansive suite in downtown Washington, the RJC operated on a budget of more than $3 million and employed 17 people in 2013, the most recent year its records can be compared to NJDC’s. Brooks himself earned compensation of $600,000. This past year, it was able to summon all the GOP’s 2016 presidential candidates to multiple gatherings at which they competed to convince the group’s wealthy donors to back them. The group is thriving, growing in resources and in presence.

The NJDC now has no office of its own. Instead, its work is carried out by Bluelight Strategies, a PR firm it has contracted with that does work for many Democratic party clients. In 2013, NJDC operated with a budget of less than half a million dollars. And though it never matched its Republican counterpart in size, NJDC has undergone a reorganization this year, making it an even leaner operation.

“Our objective was never to compete with RJC,” said Greg Rosenbaum, the chairman of NJDC’s board. He argued that while Jewish voters who support the Republican cause can do so only through the RJC or by backing the sole GOP Jewish congressman, Lee Zeldin, Democratic Jews can choose to back anyone among 28 members of Congress or the NJDC. “We’re defending the high ground, so our expenses are lower,” he explained when asked about the two groups’ funding gap.

NJDC’s reorganizing began in early 2014, after Rosenbaum took over as chairman, as the group sought to cut costs and to pay off old debts to vendors. In discussions with the Democratic National Committee, the group debated the option of folding into the DNC as yet another constituency desk but decided against this option. Instead, NJDC underwent a process of restructuring that was aimed at lowering expenses. The process moved into full speed after the abrupt departure of executive director Rabbi Jack Moline, who served in the position for less than a year.

Instead of the staff of four it previously employed, NJDC operations were contracted out to Bluelight Strategies, a P.R. firm owned by Steve Rabinowitz, who already served as NJDC’s vice president, and Aaron Keyak, a former interim executive director of the organization.

NJDC now operates out of the offices of Bluelight Strategies, with Keyak holding the position of de facto executive director and Rosenbaum, the top lay leader, playing a larger role as the organization’s public face. “This reorganization,” Rosenbaum said, “became possible by me being in D.C. and spending my business career trying to do things in a more efficient way.”

Rosenbaum, a merchant banker from Bethesda, Maryland, was among the founders of the Carlyle Group private equity firm. He now owns the Dayton Dragons minor league baseball team.

NJDC’s move was modeled in part on a similar experiment conducted during the 2012 election cycle. Then, Keyak and Rabinowitz set up an operation dubbed the “hub,” which operated outside NJDC and the DNC and served, in effect, as the Democratic campaign’s Jewish public outreach arm.

NJDC insists that the new structure does not involve any decline in activity. Officials with the group point to its aggressive advocacy work in favor of the Iran nuclear deal and to the recent drive led by NJDC to counter the outreach efforts of Republican candidates’ to the Jewish community.

But 25 years after its founding, NJDC and its supporters still grapple with the need to define their role and purpose in the Jewish political scene.

“NJDC is useful and has been useful historically, but I don’t think we need it on our side as much as the Republicans need a Jewish organization on their side,” said former congressman and longtime Jewish Democratic activist Mel Levine from California.

This line is supported by many Jewish Democrats. They believe that although Jews do not need a separate organization in order to express their support for the party and its candidates, they still benefit from having a strong independent voice that conveys Jewish voters’ concerns and interests to party leadership.

Garnering Jewish support for the Democrats has always been viewed as an easier task given the clear liberal-leaning demography of the American Jewish community. “This is one of the most liberal identified groups in the country,” said Steven M. Cohen, professor of contemporary Jewish studies at Hebrew Union College. The Republican Jewish voting pool, he said, is based primarily on Orthodox Jews or those close to the immigration experience. All the rest tend to vote Democratic.

And while a widely respected survey of American Jewry in 2013 by the Pew Charitable Trusts found that Orthodox Jews are growing faster than other groups within the community, Cohen believes this will not have an impact on voting trends in the foreseeable future. “It will take a long time to change the share,” he said.