AFULA, Isrsael – From her backyard deck in Yafia, an Arab village west of Nazareth, Iman Sharary, 53, pointed to a plot of land in the distance where her sons will build their homes.

She would have preferred her children stay in Yafia, but with land at a premium in the village, she and her husband sought and won the tender to build in a less expensive area. Afula Illit is a tree-lined suburb about 10 miles south of Yafia. It’s also predominantly Jewish.

Now, the Sharary family is at the center of a local controversy with national proportions. One of dozens of Arab families from northern Israel that won tenders to build 49 homes in Afula Illit, the Shararys and their fellow Arab bidders face the fury of many of their potential Jewish neighbors.

Days after the tender process results were made public, a group of about 200 Afula residents staged a protest, calling on Mayor Yitzhak Meron to revoke the tenders. Demonstrators denounced him as a “traitor” and a “terrorist,” according to press reports. “He wants to build a mosque,” one sign at the protest read.

The Afula episode is only the latest real estate controversy with a racial tinge in Israel. According to the Walla news site, Jewish residents of Ofakim, a city west of Beersheba, won tenders to build in the city but canceled the transaction once they learned that 14 Bedouin residents were planning on settling in the same area. 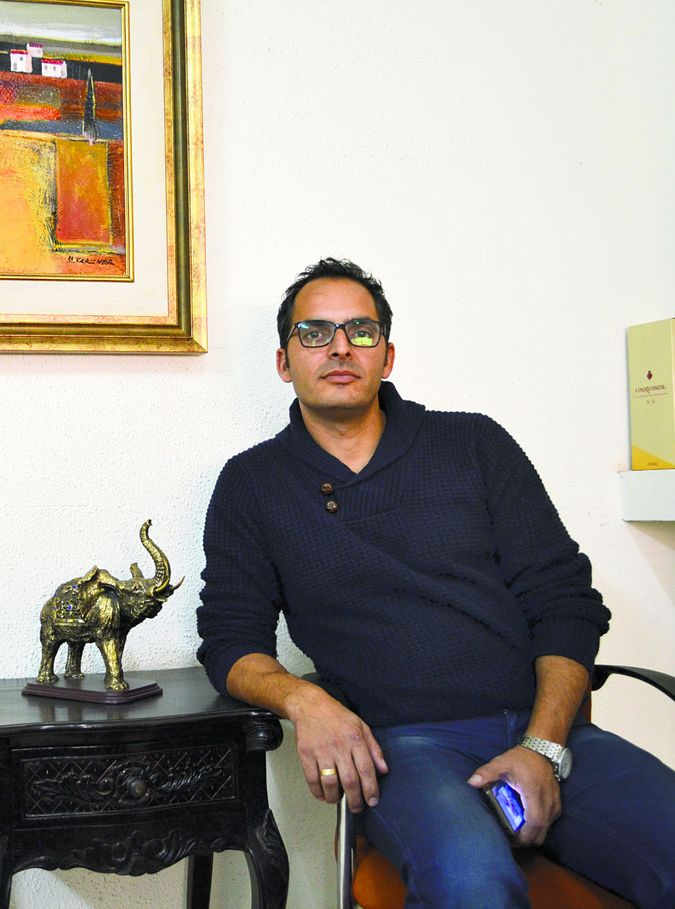 Not in My City: Adeil Eluz, a gas station manager in Afula, is protesting against the prospect of Arabs moving in nearby. Image by Naomi Zeveloff

And in November, the Bemuna construction company posted a video advertisement of an Ashkenazi family whose Hanukkah celebration was interrupted by Mizrahi neighbors — Jews of Arab origin — depicted as raucously ignorant of their Ashkenazi holiday traditions. The video, which the company later deleted, was an advertisement for a new housing development in Kiryat Gat that presumably would be free of Mizrahim. “Do you dream of owning your own home?” the voiceover said. “Want neighbors after your own heart?”

Now, Israel’s attorney general has demanded the Israel Land Authority to look into the charge of racial discrimination at Bemuna in the sale of the apartments.

These incidents and others in recent years speak to the deep segregation in Israel. With a few exceptions, like Haifa and Jaffa, Israel is a country split along ethnic and religious lines, with different school systems and population centers for each group. Officially speaking, “there is no legal basis in creating the segregation” when it comes to housing inside the Green Line, said Talya Steiner, a researcher at the Israel Democracy Institute. “It just kind of evolved.”

But the High Court has sanctioned such segregation in recent years by allowing Bemuna, the company with the anti-Mizrachi advertisement, to build housing explicitly marketed to Orthodox, so-called “national religious” Jews, who are predominantly Ashkenazi, in an Arab section of Jaffa.

There are other ways that the state maintains segregation and even helps to deepen inequality between sectors. One has to do with the ultra-Orthodox. Because Haredim, as they are known in Hebrew, have larger families and educate their children in sex-segregated schools, the Housing Ministry acknowledges and supports their need for separate neighborhoods to maintain their lifestyle. Yet the Housing Ministry ran up against “not in my backyard” attitudes from several municipalities when it tried to plan Haredi neighborhoods in cities with secular and national religious majorities. Now there is a major housing shortage for ultra-Orthodox Israelis.

Another form of state-sanctioned segregation is seen in small communities in Israel, such as kibbutzim or moshavim. These communities may screen new members based on standards such as “unsuitability to the community’s social life” or its “social-cultural fabric,” or to “unique characteristics of the community as defined in its bylaws,” according to a law upheld by the high court in 2014. Critics say this is actually code language to weed out Arabs, homosexuals or anyone outside the community norm.

Beyond the issue of segregation, Israel’s Arab villages and cities suffer from a lack of planning, which exacerbates the housing shortage in these areas. In 2000, after 13 Arab citizens were killed in demonstrations at the start of the second intifada, a state commission found that inequality between the Jewish and Arab sectors in the realms of planning and building was a central cause of the unrest. The commission recommended new plans for Arab localities. But according to a 2012 report by Bimkom, a planning rights organization, planning in Arab cities still lags far behind that in Jewish areas, leading to “housing crises and lack of public buildings for services.”

Poor city planning in Arab areas is at least part of the reason that some Arabs are moving out of their home communities and into Jewish towns. As Sharary said of her family’s purchase in Afula, “Arabs need it very much.”

“The story of Afula is a symptom of a much greater issue,” Steiner said. “There is a socioeconomic development pushing young Arab couples to leave Arab cities and find quality of life in adjacent neighborhoods.”

Many of the Arab buyers in Afula — such as the Shararys, who are a family of accountants — come from sturdier economic backgrounds than the Jews who are now protesting their presence in the city.

“There is a counterintuitive socioeconomic aspect here,” said Rachelle Alterman, a planning expert at Israel’s Technion. “We are talking about an upwardly mobile, upper-middle income, or certainly a higher-educated Arab population in Afula, which is lower-middle income Jewish. There is this reverse disparity.”

Afula’s Jewish protesters are expressing their opposition to these new neighbors loud and clear. One anonymous activist posted a photo of Meron wrapped in a keffiyeh, the Palestinian national scarf, on Facebook. Right-wing activists mocked up similar images of Yitzhak Rabin before his murder, and also, more recently, of President Reuven Rivlin for his outreach to Arab citizens. According to a report on the Israeli website Mynet, the police are investigating the picture’s provenance.

One of the protesters, David Suissa, is chief of staff to Construction and Housing Minister Yoav Galant of the center-right Kulanu party. Issawi Frej, an Israeli-Arab member of the Knesset, called for his firing.

“The Housing Ministry should campaign against racism in housing and not promote it,” he said.

The mayor’s spokesman, Moty Priel, said that the municipality is “unable to and should not intervene” in the tender process. Because the land in question is state owned, any citizen — regardless of race, religion or gender — may participate in the auction, which is held by the ILA.

An ILA spokesman told the Forward that the tender was conducted “according to the rules.”

That hasn’t placated the protesters. Adeil Eluz, manager of a gas station in Afula, said that the tender should have first been open to locals in Afula and then to people who have served in the army — a move that would exclude most Arab Israelis, who are not drafted into the army. 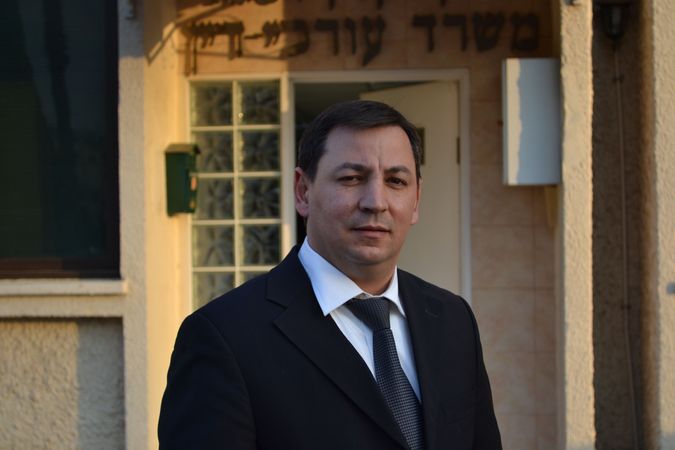 Working the Legal Front: Attorney Ilan Vaknin, who represents 10 Jewish families who lost an auction for tenders to build homes in Afula, says he and his clients ‘want to keep the Jewish character’ of the city. He is calling for an investigation into where the Arab families who won the bids got their money. Image by Naomi Zeveloff

“It’s not against the Arab people,” he said. “It’s against the priority of the mayor and his councilors to give land to outside people instead of local people.”

Ilan Vaknin, an attorney representing 10 Jewish families who lost the auction, as well as other Afula residents, is less guarded in his assessment.

“We want to keep the Jewish character of the city,” he said. “And if we take in 50 [Arabs] in this little place, this will change the place from one side to the other.” Afula’s total population is 41,000 residents.

Vaknin said he suspects that some of the Arab buyers coordinated their bids, which would run afoul of the ILA process.

“Maybe an Islamist organization brought money to buy the Jewish land,” he said. “We want the police to check it.” The mayor’s office said it would look into the allegations.

Sharary believes that the protesters are driven by fear. The uproar hasn’t prompted her family to reconsider their bid. “It’s a good opportunity to make Afula another mixed town,” she said.