My Evening at the PLO’s Christmas Party (No Mistletoe in Sight!) 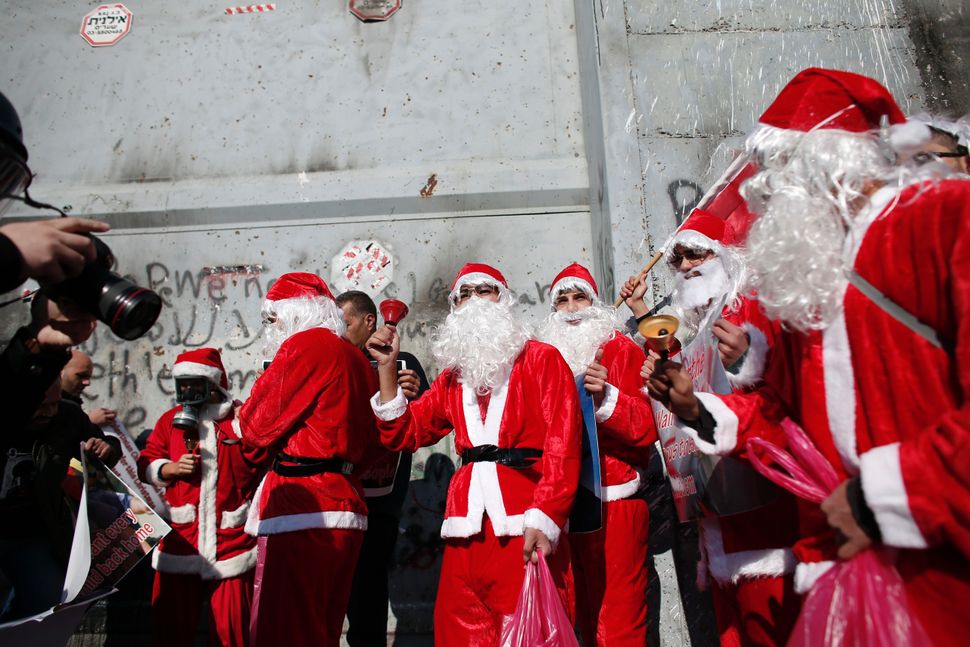 For foreign journalists in the Holy Land, the festive season usually arrives with an interesting missive: an email invitation to the Palestine Liberation Organization’s annual Christmas dinner.

The event is an opportunity for Saeb Erekat, the secretary general of the PLO, to spread Christmas cheer, toast the New Year, and make predictions about 2016 over plates of maqluba, a Palestinian chicken-and-rice dish.

Given that the dinner came on the heels of a violent two months in Israel and the Palestinian Territories, Erekat’s predictions were, well, predictable: 2016 is going to be grim.

The dinner was held on December 17 in Beit Jala, a town near Bethlehem in the Israeli-occupied West Bank. The entrance to the town is marked by an Israeli-issued red sign, warning Israeli civilians that it’s illegal and dangerous to enter there. 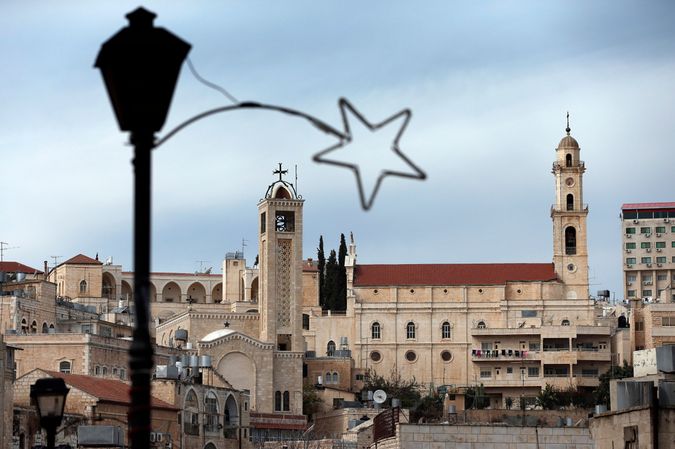 Christmas decorations are up as Bethlehem gets readies for the festive season.

Just beyond the checkpoint is the Déjà Vu bowling and dinner club. The road continues to Chile Square, named for a sculpture there donated by the Chilean government. The Orthodox Club, decked in Christmas trees, is down a side street.

Inside the Orthodox Club, the dining room was quickly filling up with journalists, who chatted with bottles of Taybeh, the Palestinian-brewed beer, in hand. Erekat sat at the head of the room, surrounded by other dignitaries. A microphone was propped up in a breadbasket on the table.

Erekat was sitting under a framed picture of Jerusalem’s Old City with the Al Aqsa mosque compound. Behind him was a miniature Christmas tree with red and gold ornaments.

Erekat began his addresses with wishes for a “prosperous, healthy and more peaceful 2016.” But he quickly grew more pessimistic. Just a few days ago the mayor of Bethlehem had been given a “Christmas present” from Israeli officials notifying her that 102 dunums, about 25 acres, of land would be confiscated from the Bethlehem area. (An email to the Civil Administration, the Israeli occupation’s administrative arm, was not immediately answered.)

In addition, a Jerusalem housing committee had recently furthered plans for almost 900 units in the Gilo settlement.

“What they are doing the blind will see and the deaf will hear,” said Erekat. “It is not a secret, just very clear cut policies of the government, from the settlers, by the settlers and for the settlers.” 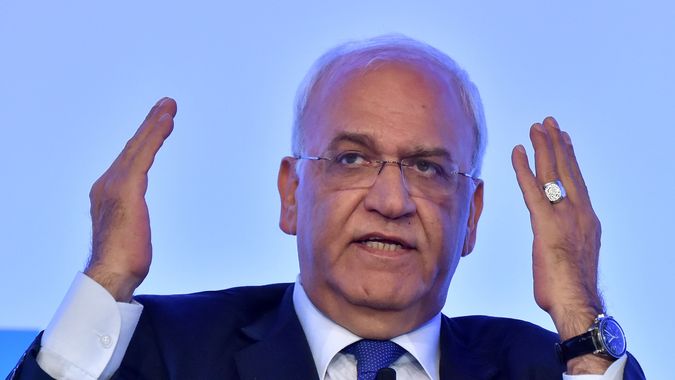 He condemned Israel for holding the bodies of 46 Palestinians whom Israel accused of terror attacks, later revealing that on of his nephews was among them.

Erekat said he had nothing against Jews, calling Judaism “one of God’s great religions,” but he warned that Israeli Prime Minister Benjamin Netanyhau was quickly turning the Israeli-Palestinian conflict into a religious war.

Then he brought up another group of religious warriors: the Islamic State. Erekat’s proposal for beating the group was simple: “The first thing we need to do to defeat ISIS is to end this occupation.”

“Two-thousand sixteen will mark how this region will go for the next part of the 84 years remaining in this century,” he said in conclusion. “Do we enter in the vehicles of democracy and peace or do we enter it in the vehicles of Abu Bakr al-Baghdadi” — the head of the Islamic State — “and Benjamin Netanyahu?”

Although they are often confused by foreigners, the Palestine Liberation Organization is not the same as the Palestinian Authority. The PLO is an umbrella political group that claims to represent all Palestinians, including those in the diaspora. The Palestinian Authority, meanwhile, is the governing body in the Palestinian Territories, minus Gaza where Hamas rules in spite of a unity agreement between the two entities. Mahmoud Abbas is the top leader in both the PLO and the PA.

Most Palestinians are Muslims and just an estimated 2% of West Bank Palestinians are Christians. But there is something of an outsized effort to mark Christmas, especially since thousands of tourists journey to Bethlehem each year to mark the holiday in the reputed birthplace of Jesus.

After a short address by the mayor of Bethlehem, a woman walked around with a microphone for questions.

One journalist stood up, wanting to know about how the PLO defines the recent spate of stabbing, shooting and vehicular attacks against Israeli Jews over the past two months.

Another journalist quietly mocked the query: “That’s a typical American question. ‘We call this occupation and we call this resistance.’”

Erekat, for his part, demurred: “No one wants to say in her heart that we condone the killings of Palestinians and Israelis,” he said. “Those that steal hope from the minds of these young Palestinians, those that tell those Palestinians that you have no future, no dignity, no freedom, no hope of having your independence should look in the mirror and see where responsiblity lies.”

Meanwhile, waiters in black vests began passing out plates of cucumber and tomato salad. Erekat answered other questions. One reporter wanted to know whether the Palestinian Authority was considering revoking its security cooperation with Israel.

Erekat said that the PLO was “weighing all options,” hinting that an announcement would be made in early 2016 to redefine the economic, security and political relations with Israel. He wouldn’t provide further details.

“Business as usual no more.”

It wasn’t exactly a bombshell, but the journalists scribbled it down anyway. Then they dug into plates of chicken and rice.

My Evening at the PLO’s Christmas Party (No Mistletoe in Sight!)