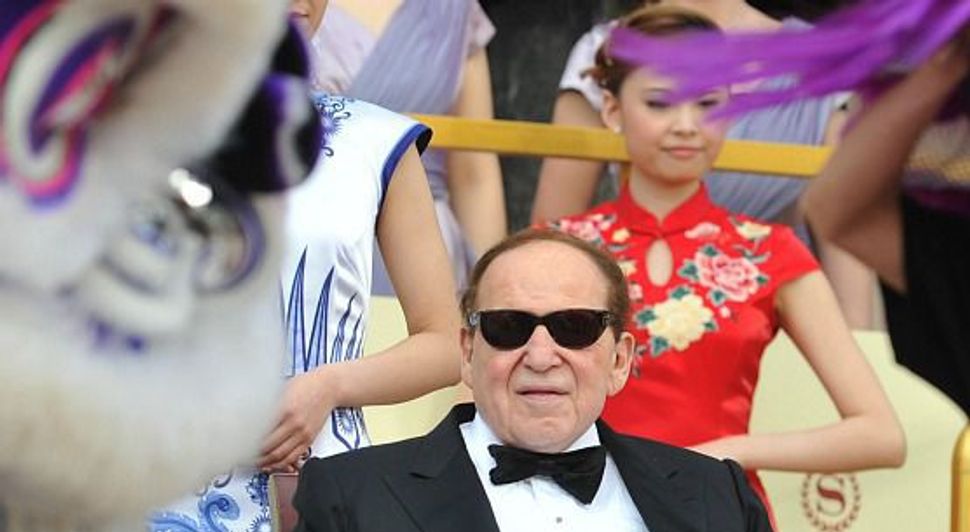 Sheldon Adelson, who was unmasked in mid-December as the secret buyer of Nevada’s largest newspaper, has another media secret.

The Forward has learned that Adelson’s family foundation is the largest single funder behind JNS.org, a Jewish news service that serves a growing number of American Jewish news organizations. Newspapers that subscribed to the service told the Forward that they had not known its prime backer’s identity — until now.

JNS.org has exclusive U.S. distribution rights to the Adelson-owned right-wing Israeli daily Israel HaYom, yet the nature of the relationship between Adelson and the newswire has, until now, been obscure. When asked by the Forward in 2013, JNS’s publisher, Russel Pergament, would not say whether or not the newswire was funded directly by Adelson.

In an email, Pergament said he did not recall whether the Adelson grant was made before or after his June 2013 interview with the Forward. “There is no secret as to which foundations provide funds,” he wrote. It is “their decision to announce [a grant] or not.”

Publishers and editors with six local Jewish newspapers that subscribe to JNS told the Forward that they did not know who the newswire’s major funder was. “It’s surprising, but I’m not upset, because it’s not something I asked,” said Jackie Headapohl, editor of the Detroit Jewish News. Headapohl said that her paper does not use JNS’s opinion content.

ADELSON AND THE VEGAS MEDIA MOVE

The revelation of Adelson’s direct funding of JNS comes days after the resolution of the bigger Sheldon Adelson media mystery. The family of the casino mogul and Republican Jewish mega-donor was identified on December 16 as the new owners of Nevada’s largest newspaper, the Las Vegas Review-Journal.

The disclosures, dug out by determined reporters at Fortune and at the Review-Journal itself, surfaced a week after Adelson purchased the paper for a gobsmacking $140 million while hiding his identity behind a limited liability corporation. The price was $38 million more than the paper’s previous owner had paid just nine months earlier for an entire chain of newspapers that included the Review-Journal.

Journalists at the Review-Journal staged a mini-revolt in the days between the sale of the paper and identification of the Adelson family as the buyers, tweeting links to journalistic codes of ethics that emphasize accountability at media companies that themselves demand transparency of those on whom they report.

Adelson’s reasons for paying such a high price for the Review-Journal are opaque. In a statement, the Adelson family said that they saw the purchase as “a financial investment as well as an investment in the future of the Las Vegas community.”

Nevertheless, the steep price has fueled speculation about Adelson’s possible intent to use the paper, whose editorial stance is already conservative, to increase his political impact in Nevada, a key swing state in the 2016 presidential election.

That speculation stems, in part, from the way Adelson has used Israel HaYom to advance his political influence and agenda in Israel. The paper is often derided in Hebrew as “Bibiton”— a play on “eeton,” the Hebrew word for newspaper, and “Bibi,” Prime Minister Benjamin Netanyahu’s nickname, reflecting perceptions that its coverage of Netanyahu and his right-wing policies has been consistently laudatory. The paper, a free handout, has grown to become Israel’s largest daily paper since Adelson founded it in 2007,

The Adelson-funded JNS is not overtly ideological, but observers see it as more hawkish than the Jewish Telegraphic Agency, the 99-year-old Jewish newswire whose historic dominance as a Jewish media newswire the JNS is challenging.

“The perspective around [the American Jewish Press Association] is that they’ve been transparent about their difference from JTA,” said Rick Kestenbaum, president of the Jewish newspapers’ trade association and COO and general manager of the New Jersey Jewish News. “As far as I can see, the editors are well aware of it.”

Yet an editor at the Heritage Florida Jewish News, and the publisher of the New Jersey Jewish Standard, among others, said that they did not know about Adelson’s funding role at the newswire.

“I’m not surprised, given the leaning of JNS and given his activities in media,” said Jim Busis, CEO and publisher of the Pittsburgh-based Jewish Chronicle. “We always knew what their orientation was.”

Rabbi Hillel Goldberg, the longtime executive editor of the Intermountain Jewish News in Denver, also said that had not been aware of Adelson’s role funding JNS. “That’s not relevant to me, because everything that comes into this office, from whatever source, is scrutinized,” Goldberg said. “There’s always some kind of agenda, whatever it might be, behind any news piece. We’re alert to the potential for it.”

THE POWER OF THE JNS

JNS’s Pergament praised Adelson in an email to the Forward. “I regard Sheldon Adelson as the greatest individual supporter and protector of Israel on the planet,” Referring to Israel’s first prime minister and its first right-wing prime minister, Pergament said, “In my thinking, where Israel’s protection and survival are at stake his role in this century rivals [David] Ben Gurion’s and [Menachem] Begin’s in the preceding century.”

Pergament is a former colleague of Michael Schroeder, the manager of the limited liability corporation formed by the Adelson family to buy the Review-Journal, according to a December 15 report in that paper. Pergament founded a free Boston daily paper called BostonNOW; Schroeder was its publisher.

Founded in 2011, JNS is far cheaper for its newspaper subscribers than is JTA, its more centrist rival, whose dominance as a syndicated news service for and about the Jewish dates to its establishment in 1917. Pergament said that a third of JNS’s subscriber base of between 40 and 55 news media outlets use its content for free on a “trial basis” that can stretch out for as long as a year. Weekly papers that do pay for the content are charged up to $500 per month.

JTA’s subscription rates are higher, though Ami Eden, CEO and executive editor of 70 Faces Media, JTA’s parent organization, did not respond to an inquiry on how much his newswire charges. The Forward pays $1,600 per month for the right to use JTA’s content in its English and Yiddish editions.

While some local Jewish papers use both JNS and JTA content, at least a handful have switched entirely to JNS. Eden acknowledged that the JTA had dropped from 75 syndication clients in 2013 to 67 today. But at least three of those outlets had closed entirely, he said.

(The Forward subscribes to the JTA and Reuters, but not to JNS.)

“We think there’s room for lots of Jewish media, including outlets with a political agenda,” Eden said, speaking generally about the Jewish media landscape. “JTA’s purpose is to highlight voices from all sides, without bias.”

The political impact of JNS’s growth is difficult to gauge. A handful of observers declined to discuss the phenomenon when contacted by the Forward.

Adelson has said that he doesn’t plan to meddle much with the Review-Journal, his new Vegas outlet. “”We are not going to hire an editor,” he told Reuters while visiting Macau December 18. “We may take some of the positive characteristics of our Israeli newspaper and add them to there but that’s all just suggestions.”