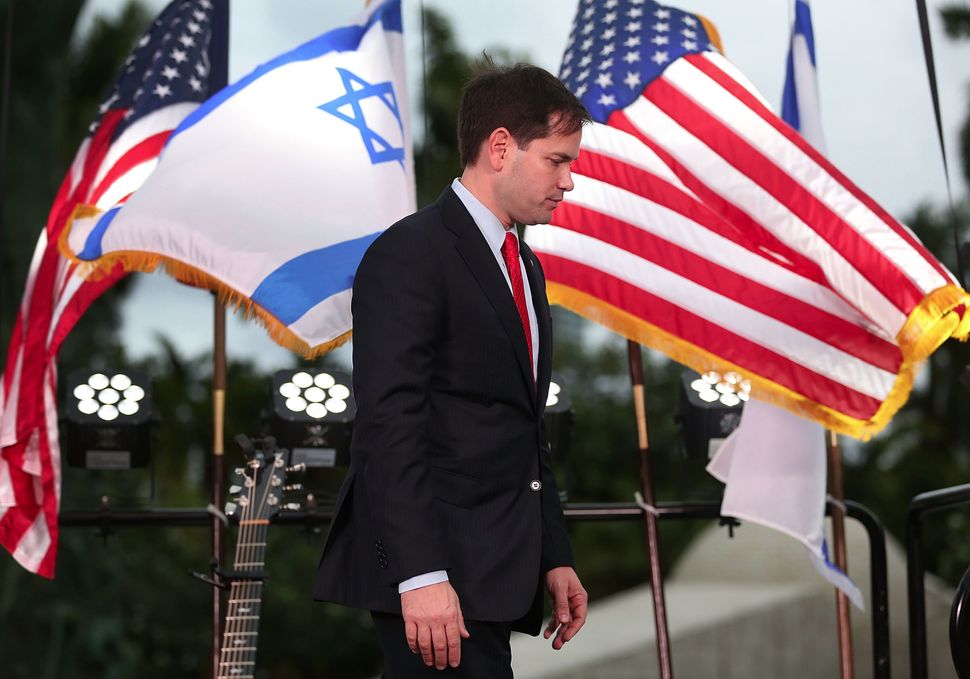 A new poll has revealed a powerful force behind partisan divides in public opinion on Israel: the Evangelical right.

It’s generally assumed to be a political fact that Republican voters and candidates are more unilaterally supportive of Israel than their Democratic counterparts. But the poll, released by Dr. Shibley Telhami, a non-resident Senior Fellow at the Center for Middle East Policy at the Brookings Institution, indicates that difference is largely produced by a single sector of the Republican party.

“What you’re going to find is a large number of Evangelicals interpret the Bible to mean that the boundaries of modern-day Israel should coincide with their interpretation of what Biblical Israel was like,” Telhami said in conversation with the Forward. “It’s not surprising on the surface but is in some other ways because they are deriving some policy conclusions from religious beliefs.”

Ari Morgenstern, a spokesperson for Christians United for Israel (CUFI), wrote in an email to the Forward that his organization did not find the results surprising.

“Evangelicals are theologically predisposed to supporting Israel because they believe the Bible to be the word of God,” he wrote. “In addition to this theological view, Evangelicals tend to place a strong emphasis on the values and democratic principles shared by the US and Israel. Thus their theological predisposition is complimented by a Western worldview and this combination leads to strong support for Israel.”

So, why does the Evangelical right — which, according to Telhami, accounts for around a quarter of the Republican party —wield such substantial influence on this issue?

“Politics isn’t just about public opinion,” Telhami said. “It’s about campaign contributions, it’s about passionate segments of the public that care more deeply and will lobby more heavily. They’re a passionate segment of the public [on this issue].” Telhami also found that, among Evangelical respondents, those who reported they occasionally watched Christian television or listened to Christian radio were significantly more supportive of Israel than those who did not consume specifically Christian media.

“The issue of Israel is prominent in their typical coverage,” Telhami said, referring to Christian media outlets. “The Israel angle is one where there’s an interpretation closer to where Bibi Netanyahu is.”

The level of support for Netanyahu among Evangelical Republicans correlates with their support for Israel.

“When you ask the Republicans ‘Who do you admire most,’ in an open question, ‘national or international leaders,’ Republicans – about 12% – name Bibi Netanyahu, tied with Ronald Reagan. When you ask the Evangelical Republicans almost 22% say he’s by far their favorite leader. I suspect – I haven’t actually run the correlations yet with those who watch and listen –but I’m willing to guess that those will rank that even higher than the 22%.”

Telhami sees the support of Evangelical Republicans for Israel as impacting the Republican party’s broader position on the Middle East.

Looking outside of Evangelical Republican responses, Telhami noted that there is a gap between the positions politicians take on the Israel-Palestinian conflict, compared to those stated by their constituents — particularly within the Democratic party.

“About half the Democrats want to see some punitive measures against Israel on the issue of settlements,” Telhami said. “Name a single American politician – Democratic – who voices that.”

“I think that gap – you can argue it’s only a matter of time before there’s pressure on it to be bridged,” Telhami said. “But on the other hand I think there’ll be some frustrations among progressives in the Democratic party. This is not a top priority issue for most of them in a way that’s going to be absolutely consequential in the short term.”

Telhami’s poll, conducted in November, gained a total of 1,738 responses. Evangelical and Born-again Christians constituted 24% of the national sample for the study.

The full findings of Dr. Telhami’s poll can be found through the Brookings Institution and his website through the University of Maryland.