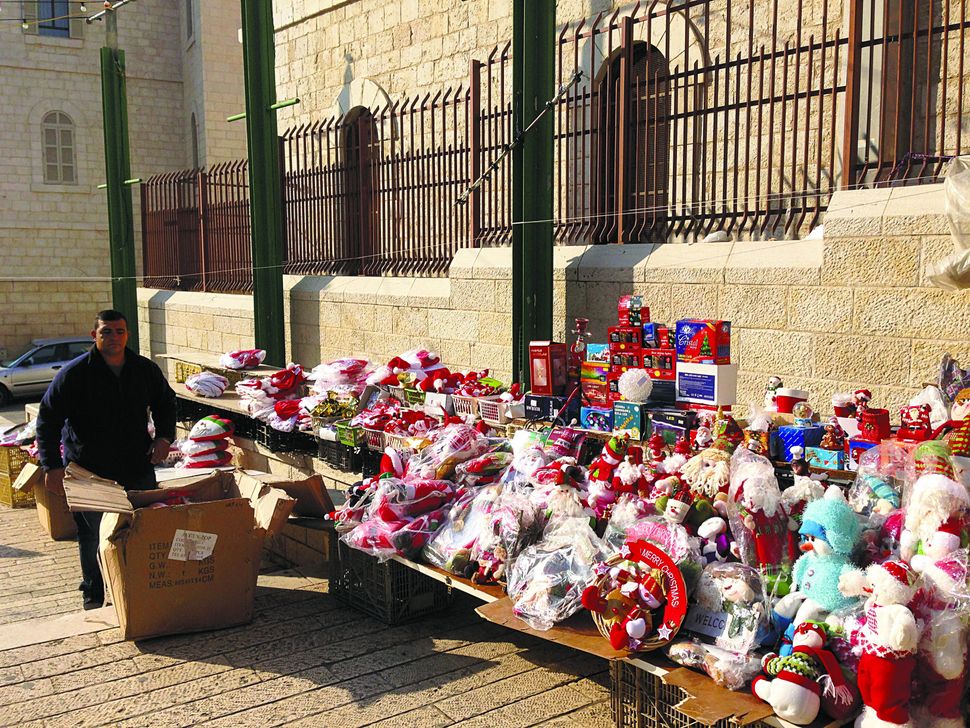 Bad Times for Business: A shopkeeper displays Christmas toys outside of the Nazareth bazaar, which was quiet in the days before the holiday. Image by Shira Rubin

In the days preceding Christmas, the well-stocked markets of the town cited by the Christian Bible as Jesus’ hometown were uncharacteristically silent. Few foreign pilgrims roamed the streets adjoining Nazareth’s towering white landmark church, the Basilica of the Annunciation, where Christians believe the angel Gabriel visited the Virgin Mary with the message that she was destined to carry the Messiah in her womb.

The bleak streets were in part a product of the so-called “knife intifada,” which has persisted into its third month in cities throughout the country, bringing the death toll to 19 Israelis and at least 117 Palestinians.

But that has not been the only source of concern. This year has seen an escalation of anti-Christian extremism from Israeli Jews, who have become increasingly visible while critics see response from the government as lacking.

Five months ago, the Galilee’s symbolically and religiously significant Church of the Multiplication of the Loaves and Fish was firebombed by Jewish extremists who scrawled on its wall, “False idols will be destroyed.” Restoration of the church has remained stalled due to bureaucratic obstacles from the government and funding shortfalls from the internal Christian community, according to Auria Manongol, the director of the church’s office for pilgrims.

Meanwhile, the anti-Arab group Lehava, which opposes the presence of both Muslims and Christians in the country, has stepped up its activism, most recently with a protest in front of the Jerusalem International YMCA during a pre-Christmas celebration. “The Arabs won’t defeat us with knives, and the Christians won’t buy us with presents!” the Lehava protesters chanted at the demonstration last month. 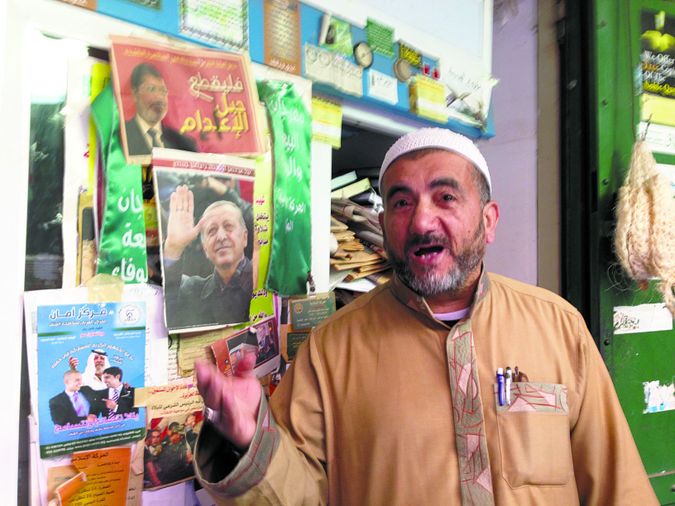 Season’s Greetings: Shiekh Muhammad Abu Anas, the imam at a Nazareth mosque, in front of his shop, decorated with photos of Islamist leaders. Image by Shira Rubin

In December, Bentzi Gopstein, the head of Lehava, penned an opinion piece in Kooker, an ultra-Orthodox online publication, calling for the outright removal of Christians from the land.

“Missionary work must not be given a foothold,” he wrote. “Let’s throw the vampires out of our land before they drink our blood again.”

The Israel Religious Action Center, a religious rights group affiliated with the country’s Reform Judaism movement, has called on legal authorities to launch a criminal investigation into what it views as Lehava’s incitement to violence.

Public security minister Gilad Erdan announced that he is considering outlawing the organization for incitement. But Moshe Dayan, the ministry’s spokesperson, said that he was not aware of any progress on that front. Gopstein and other Lahava members have been detained and questioned numerous times over the years. But the Shin Bet, Israel’s domestic intelligence agency, says it has not been able to find sufficient evidence for a court to prohibit the group’s activities.

Until recently, says Nazareth resident Suraida Shomar Nasser, debate over the viability of Christian life in the city, where they make up less than 30% of population, was “something no one ever thought about.” Shomar Nasser, who manages a guesthouse that was once her grandfather’s 200-year-old mansion, said she was expecting to host only a handful of guests this year, with most arriving for only one day, on Christmas Eve. In previous years, she said, all the rooms were fully booked.

Nasser remembers the Nazareth of her childhood as a tight-knit community in which interfaith co-existence was a given. But an influx of Palestinians from the Israeli-occupied West Bank, surrounding villages and other parts of Israel; government neglect of the town’s social and economic woes, and what she viewed as the country’s trend toward conceiving Judaism “as a nationality” have combined here to inspire something like an identity crisis.

“We are stuck between a hammer and an anvil, since to the Israelis we will always be the Arabs and to the Arabs we will be seen as the Israelis,” Nasser said.

Israel has long courted the Arab Christian community as an ally in its mission of establishing a home for the region’s persecuted peoples. But in recent years, the Israeli government has also included more ultra-right-wing figures who call for a prioritization of Jewishness over democracy. This has sent a message to Christians, as well as to other Arab Israelis, that they are considered second-class citizens. 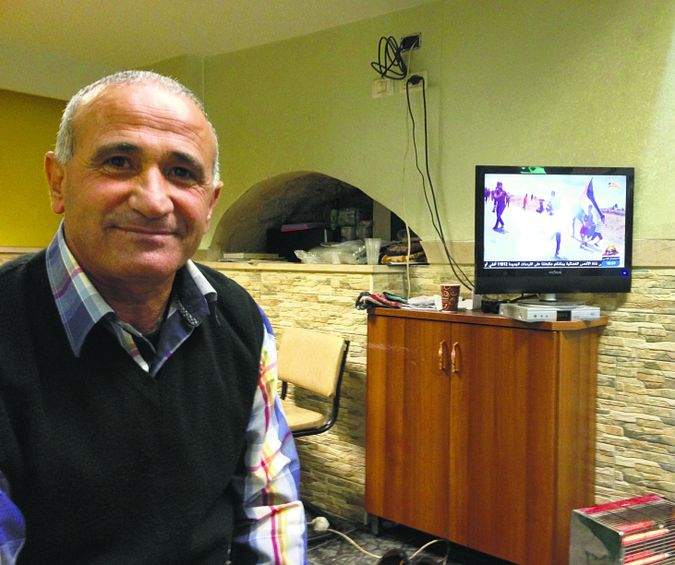 Barbershop Talk: Yusef Rahel, a Muslim resident in Nazareth, says that the U.S. and Israel created ISIS to sow strife among Muslims and their Christian neighbors. Image by Shira Rubin

About 160,000 Israeli citizens, or 2% of Israel’s population, are Christian. They make up a bit more than 10% of the country’s Arab population. Whereas numbers have dwindled in Christian communities in the Israeli-occupied West Bank and in Gaza, in Israel proper they are stable and even growing.

But there are also tensions in Nazareth between Christians and their Muslim neighbors. Earlier in December, the Shin Bet announced the arrest of five Nazareth residents who, it said, had declared their allegiance to the Islamic State group, the violent jihadist group that has taken control of large swaths of Syria and Iraq. According to the Shin Bet, local adherents of the group were planning to make the iconic Christian city into their launching pad for a jihad against “infidels.”

The Shin Bet has reported that at least 40 Arab Israelis, often from marginalized areas, have crossed Israel’s borders to join the Islamic State in its fight in Syria and Iraq.

Some Christians like Shadi Khalloul believe that Israel will be able to protect the community from extremist strains among its Muslim neighbors. But he also believes that the emergence of these neighbors marks a turning point for the community. As one of the first Christian Arabs to enlist in the Israeli army, he is part of a small group that is seeking to redirect Christian alliance away from Arabs and closer to Israel.

“We’re scared of facing threats from Muslim Arabs,” he said, “like what is happening now in Syria or Iraq. We feel that the Muslims in the villages like those surrounding Nazareth are getting more extremist, warning that if you light a Christmas tree in our village it would be not be accepted; you would face consequences.”

The few Christians who have served in the Israel Defense Forces over the past decades were often dubbed “traitors” or, in some cases, subject to assault. Enlistment remains deeply controversial. But more than 100 Christian recruits currently serve in the Israeli army, and in the coming year another 200 are expected to join, according to the Israeli Ministry of Defense.

Khalloul says that the Christians taking part in this modestly growing trend are looking to integrate into society and find a potential answer to the problem currently plaguing the community of “how we retreated from being the most successful community of the Middle East to being at its bottom.”

Such dilemmas are being negotiated by a new generation of Israeli Arabs that, in comparison to their parents, are able to move seamlessly between Hebrew and Arabic, and balance their civil identities as Israelis alongside their national and cultural identities as Palestinians. Many are informed and inspired by social media and global perspectives on the world. Instead of the idealism of their parents, they are increasingly concerned with practical goals like ensuring civil rights, said Nsiman Adawi, a Muslim from a village near Nazareth who hopes that once she receives her law degree from Haifa University she will be able to improve the lives of other Israeli Arabs.

“We are forced to live in this status quo which is Israel, where we study in Hebrew [and] talk in Hebrew, which has its advantages. But there is also this weird feeling that something is not right,” Adawi said.

Adawi grew up celebrating Christmas with her Christian friends. She says social media have made her think globally and liberally in developing her sense of identity as a Palestinian Muslim in Israel. Still, her distress with the extremism and violence she sees spreading throughout the country and her horror concerning the allegations of Israeli Arabs supporting the Islamic State in her own hometown is accompanied by concern about the underlying causes.

“I refuted this idea, and between me and myself I hoped that it wasn’t true, but people resort to the extremist acts to convey something,” Adawi said.

I found a contrasting view at a barber shop adorned with the photos of Raed Saleh, the leader of the Northern Branch of the Islamic Movement in Israel, a radical anti-Zionist group; Turkish President Tayyep Erdogan, and toppled Egyptian Muslim Brotherhood President Mohamed Morsi—all Islamist leaders who rose to power by providing social services to marginalized communities. There the mood is optimistic that eventually Islamic parties will bring justice to their constituencies.

A group of men sipping Arabic coffee say that Islamic State is not a problem either, since it is an American-Israeli-Saudi conspiracy meant to take down the real Muslims, and therefore it is no justification for the fears of Christians in Israel who say they are looking for protection.

“For us in Nazareth, an ancient city, there is love between the Muslims and the Christians, but the imperialist America has created [Islamic State], just like it brought Israel as its strong hand in the Middle East, in order to play to sectarian tensions and cause a civil war,” Yusef Rahel said. He struggled to be audible above the sound of a news program on Al Aqsa TV, a Hamas-owned channel, and his two friends who were screaming in agreement. “If the majority of Palestinians inside Israel decide to elect the Islamic Movement or Hamas,” he said, “they will come!”