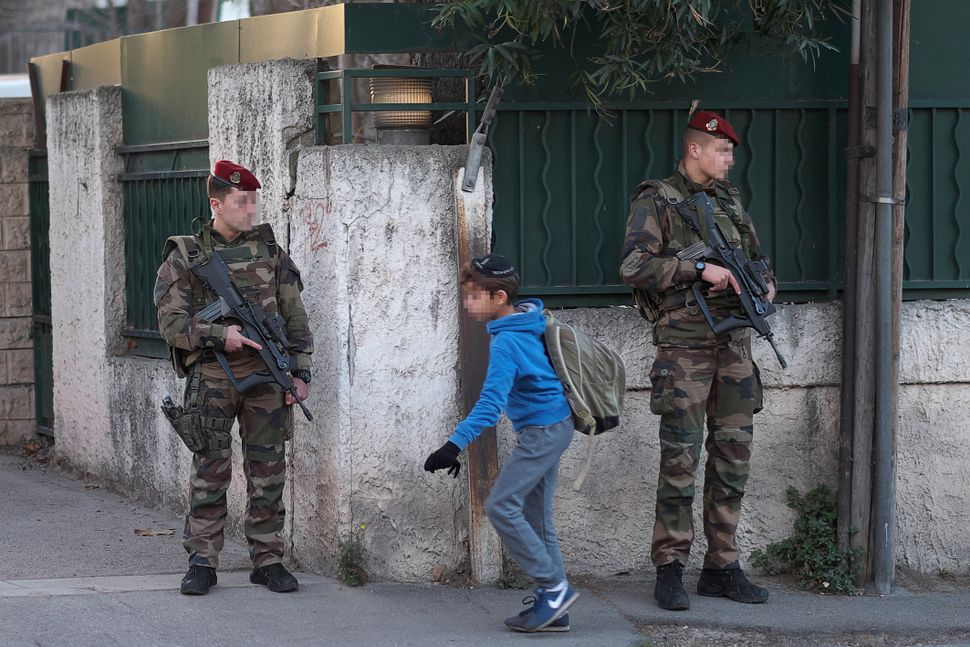 (JTA) — Only three years ago, the Jews of Marseille were able to congregate without security and in relative safety in their synagogues and community centers. While violence by Muslim extremists rose throughout France, it largely spared the southern port city, where 80,000 Jews and 250,000 Muslims live.

When I visited in late 2012, I was able to enter the unlocked door of the city’s main synagogue with no one asking questions – a far cry from the fortress-like security common elsewhere in France then and now. Michele Teboul, the president of the Marseille office of the CRIF umbrella of French Jewish communities, back then called it the “miracle of Marseille.”

Today, that sense of relative safety has been shattered by a recent spate of stabbings, most recently of Benjamin Amsellem, a Jewish teacher who was stabbed Tuesday near his synagogue. The alleged assailant was a 15-year-old boy of Turkish-Kurdish descent, who lightly wounded Amsellem with a machete before being apprehended by police. The boy told interrogators he was inspired to commit the attack by the Islamic State.

Contradicting initial reports that police believed the stabber was insane, French Prime Minister Manuel Valls called it “a revolting anti-Semitic attack against a teacher” and promised “uncompromising action against those who target our unity in the republic.”

“We are living in a state of war,” said Bruno Benjamin, the previous president of the Marseille branch of the Consistoire, the communal organ responsible for providing Jews with religious services. “Things can explode at any moment, from one second to the other. And we have learned to adapt to this new reality, which reached us later than it reached Paris, but reach us it did.”

The stabbing — the third such incident in Marseille since October — prompted Tzvi Amar, the current president of the Consistoire to call on local Jews to not wear kippahs in public. The statement was almost immediately rebuffed by leaders of French Jewry, including French Chief Rabbi Haim Korsia, who said: “We should not give an inch.”

Teboul told JTA that taking off the kippah would be to “dial back hundreds of years during which Jews were able to practice their faiths and live freely as citizens of the French Republic.”

While she opposes “self-effacing measures that would serve to drive French Jewry underground,” Teboul nonetheless conceded that her city’s famed coexistence was either at a tipping point or had already been lost.

“A few years ago, our concerns were hate preaching by certain imams, by no means the majority,” Teboul said. “But the dissemination of hate online has changed all that, crossing a new threshold in the volume of minds it poisons, reaching new audiences and making me fear very seriously that the Marseille I knew and love has changed a lot, for the worse.”

Still, Marseille has faced fewer attacks than Paris, even taking its smaller Jewish population into account. In 2014, SPCJ, the French Jewish security service, recorded 186 attacks in the Paris region, where some 300,000 French Jews live — a rate of roughly one attack per 1,600 Jews. Only 36 such incidents occurred in Marseille, a roughly 30 percent lower rate.

Benjamin traces the problem to a self-reinforcing cycle of violence, in which one attack against Jews inspires others. After the slaying of three children and a rabbi in Toulouse in 2012, SPCJ recorded 90 attacks — 15 percent of the annual tally — in the 10 days that followed.

“If you want to know what happened to change Marseille over the past four years, the answer is Toulouse and Hyper Cacher,” Benjamin said, referring to the slaying of four people last January at a kosher shop in Paris.

Even so, interfaith work continues in Marseille. Marseille Esperance, or “Marseille Hope,” an interfaith platform set up by the municipality in 1991 is generally seen as having done much to improve relations through projects by youths from the Jewish and Muslim communities.

“Jews still wear their kippot on the streets of Marseille,” Benjamin said. “But gone are the days when we would not need guards. Now every aspect of communal life happens under protection by the military. They are in our schools, in our shuls, reminding us that we are no less threatened here than in Paris — or Israel.”