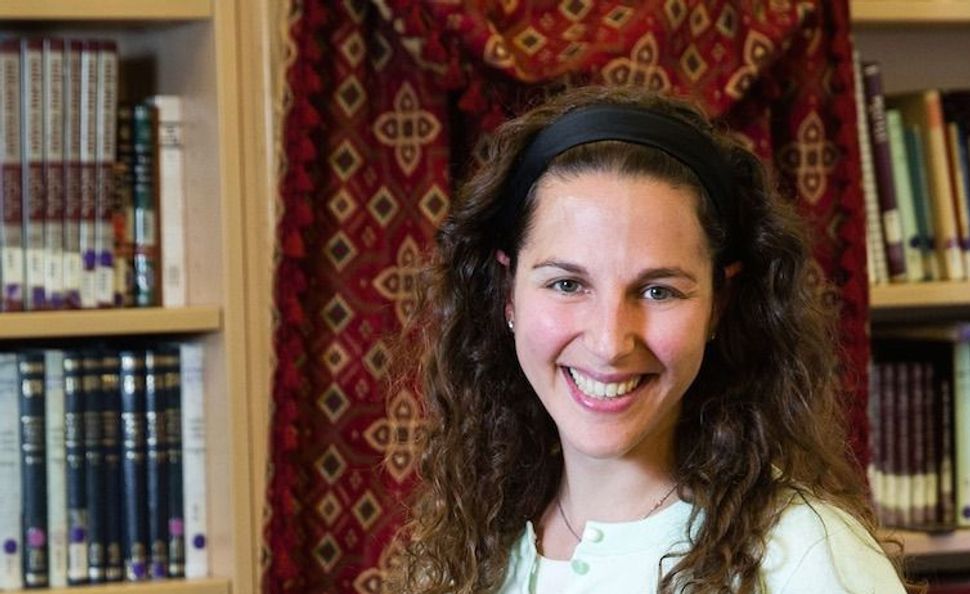 Image by Courtesy of Lila Kadegan

(JTA) — When Rabbi Lila Kagedan spends her first Shabbat at the Mount Freedom Jewish Center in Randolph, New Jersey, later this month, she will be making history.

A recent graduate of Yeshivat Maharat, Kagedan, 35, is the first person ordained at the Orthodox women’s clergy training institute in New York to adopt the title of rabbi and land a job at an Orthodox synagogue. In her new position, Kagedan will be part of the synagogue’s spiritual leadership, teaching and doing youth outreach.

“There are so many other women who have come before me who are doing this work already, including graduates of Yeshivat Maharat already working in pulpit positions,” Kagedan told JTA. “I feel that I’m standing on the shoulders of giants. I learn from them and they inspire me. It’s because of the variety of Jewish learning opportunities that already have been made for women that I have this opportunity.”

Rather than confer a particular title upon graduates, Yeshivat Maharat leaves it up to the ordainees. Some of the yeshiva’s dozen or so graduates go by “maharat,” an acronym for the Hebrew words meaning a leader in Jewish law, spirituality and Torah. Others, including dean Sara Hurwitz, go by “rabba,” a feminized version of rabbi. Alissa Thomas-Newborn, a clergywoman at the Los Angeles synagogue B’nai David-Judea, goes by “morateinu,” Hebrew for our teacher.

“I’m by nature a very traditional person,” Kagedan told JTA. “I really didn’t want to look outside our tradition for new titles. I have rabbis and mentors in my life who I really look up to and have learned so much from, and I always appreciated that their title told me exactly who they were and what their training was.”

Many Orthodox Jews are vehemently opposed to the idea of women rabbis, and several mainstream Orthodox rabbis and institutions have ruled that ordaining female rabbis violates Jewish law.

In October, the main association of modern Orthodox rabbis, the Rabbinical Council of America, passed a resolution reaffirming its opposition and barring member rabbis from hiring women with clergy-like titles.

The haredi Orthodox Agudath Israel of America has said that institutions like Yeshivat Maharat that support female rabbis “reject the basic tenets of our faith, particularly the authority of the Torah and its Sages.”

“We needed support in the areas of Torah teaching, women’s engagement, youth programming, bnei mitzvah training – to name a few,” East wrote in an email. “Those are areas that Lila comes highly credentialed and well-qualified to lead. The major considerations for this position was for the candidate to be inspired and inspiring, to be learned and approachable. Lila brings with her a great learning background and a love and faith in the Jewish people.”

East is himself a graduate of Maharat’s sister institution, Yeshivat Chovevei Torah, a rabbinical seminary for men founded in 1999 by Rabbi Avi Weiss, a New York Orthodox rabbi who has staked out maverick positions on women’s issues.

Weiss also founded Yeshivat Maharat, in 2009, and ordained Hurwitz, who serves in a clergy position at his synagogue. Though Kagedan will be the first woman ordained by an Orthodox institution to call herself rabbi, Hurwitz was the first to obtain Orthodox ordination.

Kagedan’s position is funded in part by Zelda R. Stern, a Jewish philanthropist who supports Orthodox women’s advancement. Stern also is a backer of Yeshivat Maharat.

Kagedan graduated Yeshivat Maharat last summer and currently lives in Brookline, Massachusetts. For the time being, she will commute to her new, part-time gig in New Jersey. She also does consulting work in biomedical ethics and some teaching, including at Touro College and New York Medical College.

Before Yeshivat Maharat, Kagedan obtained a master’s degree in theology and ethics at Harvard and founded a Jewish afterschool program in the Boston area called Sulam. She grew up in Ottawa, Canada.

Kagedan says that since the news broke last month of her decision to call herself rabbi, she has received mostly positive feedback – though she notes that she doesn’t have any profiles on social media, where feedback can tend toward the vitriolic.

“The response has been overwhelmingly positive,” Kagedan said. “There’s a lot of excitement and a lot of support.”