A mom of six was stabbed to death in her West Bank home by a terrorist who escaped capture.

Dafna Meir, a gynecology nurse, was set upon in the doorway of her home in the West Bank settlement of Otniel Sunday.

Her attacker reportedly fled to the nearby Palestinian village of Khirbet Karameh, and the manhunt for him continued Monday as Meir, 39, was laid to rest in Jerusalem.

Her burial was preceded by a procession and an emotional service in the street near her home, where she is said to have valiantly fought with the killer before collapsing. Three of the children were in the house at the time.

“She was a nurse not only in profession but in heart and spirit,” her friend Efrat Dahan said, according to an account of her funeral .

Prof. Yohanan Pfizer, a colleague, said: “Dafna was occupied in saving lives, and her own life was taken in front of her children.

THE HUNT FOR DAFNA MEIR’S KILLER

Haaretz reported that the man who plunged his knife into the nurse ran off to Khirbet Karameh, in the south Hebron hills.

Witnesses described the horror of the slaying for the news site.

A massive search was launched with roadblocks on the ground, troops in Khirbet Karameh, and drones and choppers in the air.

Noam Bar, a Magen David Adom medic who was called to the murder scene said, “We found an unconscious woman about 40 years old, who was not breathing and had no pulse. She suffered from stab wounds to her upper body.” He added that extensive resuscitation efforts failed, and Meir was pronounced dead.

Meir was survived by her husband, Nathan, and six children, two of whom they raised as adoptive parents. Meir was a licensed nurse who specialized in various aspects of gynecology, including the pertinent Jewish law. She operated a clinic in Otniel, and was a nurse at Soroka Hospital in Be’er Sheva.

The head of the Hebron Hills Regional Council, Yohai Damari, said, “The woman defended with all her soul the three children who were home. Otniel has seen these kinds of incidents. Otniel is in deep mourning and is prepared for the coming ones. We will only grow from this despicable murder. Nothing will stop us.”

Defense Minister Moshe Ya’alon was briefed on the attack and the hunt for the terrorist. He said last night, “The murder today in Otniel teaches us once again what kind of cruel and uncontrolled enemy we face. The security forces – the Israel Defense Forces, the Shin Bet and Israel Police – will apprehend the murderer and those who sent him, if there were any. We will not rest and we will not be silent until we settle the score with the terrorist, wherever he may be.” 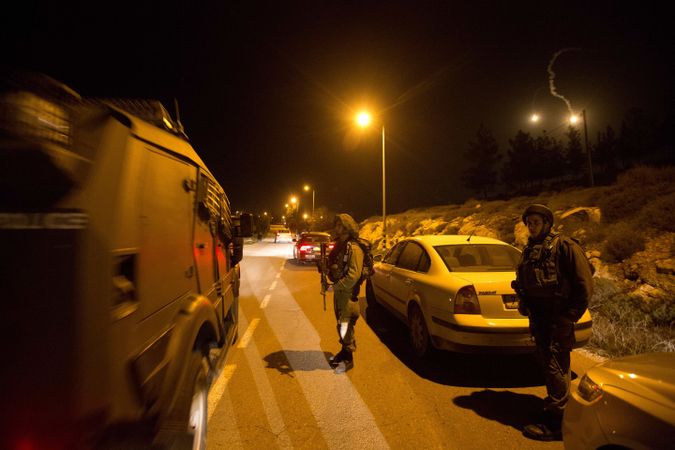 Prime Minister Benjamin Netanyahu wrote about the murder on his Facebook page, “I embrace and give strength to the family in the name of all Israeli citizens. We are all hurting and share in their heavy sorrow. We will find the terrorist and he will pay the full price for this abominable murder.”

President Reuven Rivlin called Damari yesterday evening to convey his concern and sympathies to all the residents of the community.  “This is a horrific tragedy,” Rivlin said, “and I am with you with all of my heart. This is shocking and terrible. At this time of grief, disbelief, and pain, I am sure you are focused on doing all that is needed to help the family and all the residents of the community.”

IDF forces search area near Otniel after Palestinian stabs and kills Israeli woman in West Bank. IDF Earlier in the day, a Palestinian attempted to stab a soldier at a guard post in the vicinity of Nablus. A soldier in the area shot him dead. No one else was injured in the incident.

Last November, Rabbi Ya’akov Litman and his son Netanel were murdered in a shooting attack near Otniel. Two family members were lightly wounded and evacuated to a hospital along with three other members of the family, who were treated for shock. Hebron Palestinian resident Shadi Matua, 28, was arrested the following day on suspicion of perpetrating the attack.

The last four months have seen near daily Palestinian attacks that have killed 24 Israelis and an American student. Some 145 Palestinians have been killed, about 100 of whom are said by Israel to have been lone attackers, with the rest being killed in group clashes with the army.

Israeli government leaders say the violence is being fanned by a Palestinian campaign of incitement spread by religious and political figures and on social media. However, some top military and intelligence officials have said Palestinian despair, both political and personal, is also at play.  The Palestinians, meanwhile, say the attacks are rooted in anger at decades of living under Israeli military occupation.