Why Does Bronx Old-Age Home Funnel Millions to Ultra-Orthodox Groups? 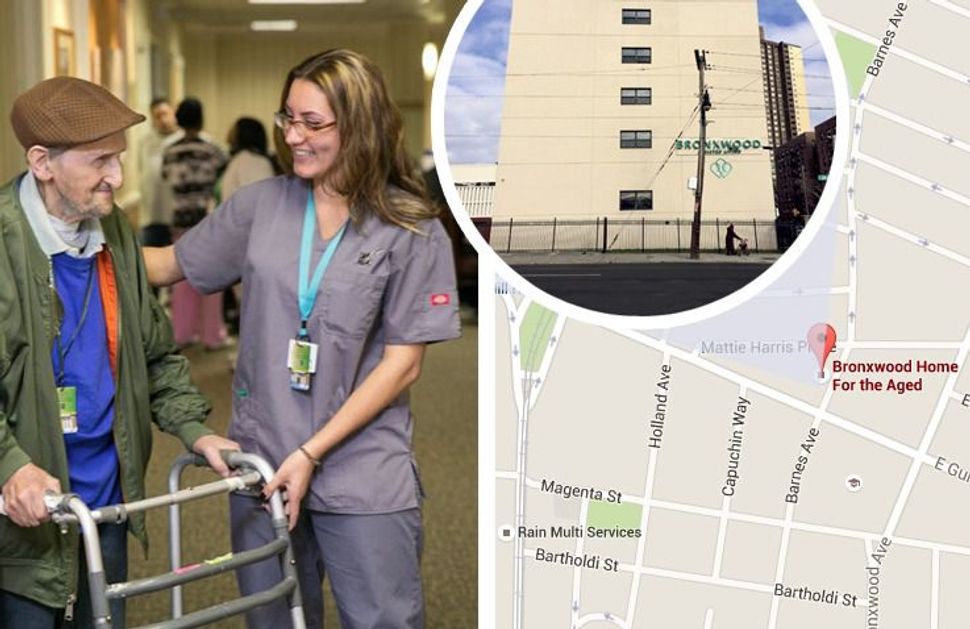 A Bronx old-age home whose board includes several high-powered Orthodox Jewish activists has sent at least $20 million to dozens of ultra-Orthodox organizations in an unusual, decades-long arrangement.

The not-for-profit, called the Bronxwood Home for the Aged, runs a home care agency and an assisted living facility, which serves largely non-Jewish seniors. It has sent one dollar out of every 10 it has earned in revenue since 1997 to Hasidic yeshivas, Orthodox activist groups and a proposed Israeli medical center, among other Jewish charities.

State and federal Medicaid funds provide roughly a third of Bronxwood’s revenues, according to a 2009 audit report. Other funds come from Medicare, private insurance and out-of-pocket payments from the home’s hundreds of elderly residents.

Experts say that it is extremely unusual for a not-for-profit assisted living facility to make large grants to unrelated charities. “I’ve never heard of a nursing home or assisted living, or any care organization, paying out that much,” said David Grabowski, a professor of health care policy at Harvard Medical School, who studies long-term care for older adults. “Most of them have pretty vulnerable, frail and needy residents… The idea that they would take dollars out of that setting seems kind of backwards.”

Other experts said that when not-for-profit assisted living facilities do turn a surplus, they usually use those funds to improve their services or save for the future.

Bronxwood, which spent $15.7 million in the most recent year for which records are available, has made $19.5 million in grants since 1997. Some of the grants are highly unusual; many are impossible to trace. One Brooklyn charity advocating for the construction of a new hospital in the Israeli city of Ashdod got $1.5 million from Bronxwood, yet it appears to have filed no tax returns for those years, and has since been stripped of its tax-exempt status. A Hasidic ambulance service that got $1 million from Bronxwood to build a new headquarters appears to have used the money to give $700,000 to other ultra-Orthodox charities instead. And one set of Bronxwood grants went to a charity whose executive director was a Bronxwood board member.

A 2009 draft audit of Bronxwood’s assisted living program estimated that the organization had overcharged Medicaid by $7.6 million on its $8.4 million tab for 2006 and 2007. Of the 200 Medicaid claims reviewed in preparation of the draft audit, 195 “had at least one error,” according to the report issued by the New York State Office of the Medicaid Inspector General. OMIG plans to take action on the audit within the next 30 days, according to a spokesman for the office.

Bronxwood officials refused to speak with the Forward, or to respond to a list of questions. A Forward reporter was not allowed to tour the assisted living facility after arriving unannounced.

Bronxwood’s seven-member board of directors includes some of New York’s most powerful Orthodox activists. Board member Abraham Biderman, New York City’s commissioner of finance and of housing under Mayor Ed Koch, is the newly appointed president of the scandal-plagued Metropolitan Council on Jewish Poverty, one of the city’s largest Jewish social service organizations. He also serves on the boards of the ultra-Orthodox umbrella organization Agudath Israel of America and of the billion-dollar Conference on Jewish Material Claims Against Germany. He has been on Bronxwood’s board since 2007.

Another Bronxwood board member, Marcel Weber, is a former chairman (and current honorary chairman) of the board of directors of the Orthodox Union, the large centrist Orthodox umbrella group. Mendel Zilberberg, who joined the Bronxwood board in 2010, is also on Agudah’s board.

Bronxwood’s large facility, just off East Gun Hill Road in a high-crime pocket of the north Bronx, doesn’t look like a pocketbook for the region’s ultra-Orthodox charities. On a Friday in early January, two dozen elderly residents, most of them black or Hispanic, milled around by the front door or sat on chairs near a colorful fish tank. There were Christmas tree baubles hanging over the front desk and an electronic dancing Santa nearby.

The five-story assisted living facility has beds for up to 500 residents. A third of the beds are set aside for participants in New York State’s Medicaid-funded Assisted Living Program, which allows frail residents, who would otherwise be forced to enter a nursing home, to be cared for in an assisted living setting using government dollars. Bronxwood is the largest of seven assisted living facilities in the Bronx that participate in the program.

Bronxwood’s attorney claimed in an email to the Forward that the group’s charitable mission included making donations to other charities. Yet its incorporation papers, which describe the group’s mission and are on file with the Charities Bureau of the New York State Attorney General’s office, make no reference to support for other charities.

The largest beneficiaries of Bronxwood’s grants are ultra-Orthodox yeshivas. Information about many of these schools is difficult to come by, as tax laws exempt them as religious organizations from filing returns. None have websites. A Lakewood, New Jersey yeshiva affiliated with the Belz Hasidic sect, called Emek Halacha, received $2.45 million from Bronxwood, more than any other individual charity. Yeshiva Machzikei Hadas, also a Belz school, received $1.9 million. (Machzikei Hadas has received citywide attention in recent months since one of its graduates, Naftuli Moster, launched a campaign protesting inadequate secular education at ultra-Orthodox schools. He told The New York Times that Machzikei Hadas considered secular subjects “profane.”)

There is only one non-Jewish charity among the 70 Bronxwood has supported since 1997. That group, a New York City charity called Concerts in Motion, arranges for musicians to perform at hospitals and for homebound elderly. It has received $175,000 from Bronxwood since 2010.

Some recipients of Bronxwood’s funds are difficult to track. American Friends of Ashdod Medical Center received $1.5 million from Bronxwood between 2008 and 2011. The group, which advocated for the construction of a hospital in the southern Israeli city of Ashdod, filed tax returns with the IRS only in 2012, at which point it reported just $6,600 in net assets. Efforts to contact the group were unsuccessful. Its tax exemption was revoked in 2013 for failing to file tax returns. According to Israeli press reports, a private, for-profit company is currently building the new hospital in Ashdod.

Yet most of the $1 million from Bronxwood appears to have been regifted as grants to other ultra-Orthodox organizations, according to tax filings. The ambulance service made $728,000 in grants in its 2011 fiscal year. Because Hatzoloh EMS is not required to identify its donors, it’s impossible to say for sure that that money came from Bronxwood, but Hatzoloh EMS received only $1.2 million in nongovernmental contributions between May 2010 and April 2013, and it started that period with negligible assets. That means that the vast majority of the money the group spent during its 2011 fiscal year came from Bronxwood.

Asked about the Hatzoloh EMS grants, which went to an assortment of Orthodox groups in Brooklyn, Orange and Rockland counties, Neustadt told the Forward that the New Square village clerk, David Breuer, ran the charity. Breuer could not be reached for comment when the Forward first attempted to get in touch with him this past summer; when the Forward tried again in January, a person who answered the phone at the village office said that Breuer was out of town, and that the Hatzoloh was not run by the village.

Image by Bronxwood Home for the Aged

Bronxwood supported a number of other groups that also distributed its funds to other charities. Congregation American Friends of Belz, which received $1.45 million from Bronxwood between 2005 and 2007, passed on grants to three other Orthodox groups. Sanz International Institutions, which received $1 million from Bronxwood from 2009 to 2011, did not file tax returns for those years, and has not filed tax returns since 2006, but at that time seems to have functioned exclusively as a grant-making organization. (Like Belz, Sanz is a Hasidic group with a relatively small North American following.)

Scandal has struck at least one major recipient of Bronxwood funds. Aish Hatorah New York, a local subsidiary of an international Orthodox outreach group, has received $555,000 from Bronxwood since 2001. In 2014, its former CFO was charged with embezzling funds from the group. He has pleaded not guilty; the case is ongoing.

Other recipients of Bronxwood’s funds have ties to the organization’s board. Project Chazon, an Orthodox educational program for at-risk religious Jewish teenagers, received $36,000 from Bronxwood between 2001 and 2007. Project Chazon’s executive vice president, Yerachmiel Milstein, is the secretary of Bronxwood’s board.

More recently, in the 2013 fiscal year, Bronxwood gave $350,000 to a group called Project Innocent Heart, a sexual abuse prevention program for the Orthodox Jewish community. The group, which received $1 million in start-up cash from New York State, has close ties to the Metropolitan Council on Jewish Poverty, according to its website. Bronxwood board member Abraham Biderman was on the board of the Met Council at the time of the grant.

Why Does Bronx Old-Age Home Funnel Millions to Ultra-Orthodox Groups?