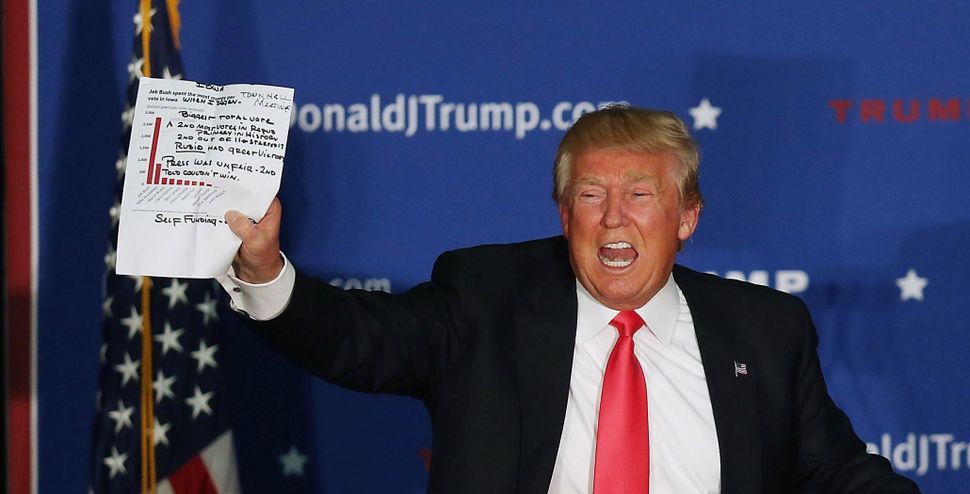 It was at the tail end of his encounter with Iowa’s Republican electorate — one day before the state’s February 1 primary caucus — that Donald Trump almost plopped a few dollars of his vast fortune into the communion plate at a church in Council Bluffs, Iowa.

That’s the plate meant to catch any stray crumbs when parishioners eat a ritual wafer representing the Christian Messiah’s body during communion. The New York real estate mogul found the correct target for his charity only later, when the church’s collection plate got passed around.

Pandering to the faith community works much better, of course, if you actually know something about the faith to which you’re pandering. But with knowledge or not, the Republican primary candidates highlighted an oversize role for religion, God and Christian values in Iowa that they are expected to pursue as the race continues.

Faith, proudly pronounced and interpreted in its most conservative manner, has emerged as a major election theme. In Iowa, where some 64% of the GOP caucus participants identified themselves as evangelical or born again Christians, those pronouncements paid off most handsomely for Senator Ted Cruz of Texas, who garnered 34% of these voters, amid his take of 27.6% generally. But it is not unique to the Hawkeye State.

After finishing first in Iowa, Cruz declared at his post-caucus victory party: “God bless the great state of Iowa. Let me first of all say, to God be the glory.”

Iowa’s evangelical voters proved to be more discerning, perhaps, than Trump gave them credit for.

“The voters can sort out who is authentic in their faith and who is making faith a part of their campaign because it’s good politics,” former Arkansas governor Mike Huckabee told the Forward hours before he decided to drop out of the presidential race. Huckabee, who is a former Southern Baptist minister with close ties to evangelicals, won the Iowa caucuses in 2008 and has learned firsthand that success among faith voters in Iowa doesn’t necessarily carry over to other states. Huckabee believes, however, that in this cycle, God will play a role in many other GOP battlegrounds. “Maybe not in New Hampshire,” he predicted, “but in South Carolina I think there will be a lot of communication regarding people’s faith as there will be in the rest of America.”

At a January 31 Cruz rally here, it was the faith-related comments that got the crowd of over 300 people cheering. When Cruz supporters onstage spoke about God’s role in politics or about abortion, or when they quoted biblical verses, the audience broke out in lengthy applause, waving Cruz campaign signs in the air. Iowa Rep. Steve King, an early Cruz backer, said he could envision a Cruz presidency in which people greeted each other with “Merry Christmas” at the White House Christmas celebration, a clear reference to use of the more general “Happy holidays” on Obama’s holiday cards, in order to include Jews and other religious minorities.

Joining Cruz in parts of his Iowa campaign trail was Bob Vander Plaats, president and CEO of The Family Leader, an organization that defines its goal as “inspiring Christ-like leadership in the home, the church, and the government.” Vander Plaats told Cruz supporters of a trip he recently made to Israel in which he met with an adviser to Prime Minister Benjamin Netanyahu. The adviser told him America must “choose well” in the upcoming elections. “We need to choose well for our country and for the nation of Israel,” Vander Plaats pleaded with the pro-Cruz crowd.

In the runup to the Iowa votes, most Republican candidates ramped up their religious message, especially Marco Rubio, who is Catholic, though in certain periods of his life he practiced Mormonism and attended a Southern Baptist church. “I will always allow my faith to influence everything I do,” Rubio said during the final Iowa Republican debate.

Talk of faith during the Republican campaign did not end with expressing personal beliefs. Leading GOP hopefuls served up an agenda packed with “value issues” that they intend to implement if elected president. These included a strong stance against abortion, and a promise to allow more religion in public education and in government. Most of the candidates have already spoken out in favor of cutting public funding for Planned Parenthood, and some have stood behind Kim Davis, the Kentucky state clerk who refused to issue a marriage license to a gay couple.

“It’s a slippery slope, and there are concerns about how much religion is being talked up,” said David Adelman, president of the Jewish Federation of Greater Des Moines. Adelman added, however, that the Jewish community is not opposed to making religion part of the discussion. “Obviously religion helps shape somebody’s moral direction, and if that’s important to people, everyone has the ability to ask these questions and vote based on whatever is important for them,” he said.

Huckabee argued that Jews need not worry about the surge in religious discourse on the Republican side, especially when addressing evangelical voters. “They should be encouraged by it,” he said, “because most of those of us, certainly who are evangelical, believe that Israel has an absolute divine right for its boundaries. Israel doesn’t have a better friend in the world than Christian evangelicals.”

On the Democratic side, candidates have traditionally been more reluctant to discuss matters of faith and religion, but a February 3 town hall event sponsored by CNN managed to draw both Hillary Clinton and Bernie Sanders into a rare discussion about their beliefs.

“You know, everybody practices religion in a different way,” Sanders replied when asked directly about his faith, laying out a worldview that equates spirituality with justice. “To me, I would not be here tonight, I would not be running for president of the United States, if I did not have very strong religious and spiritual feelings.”

“My spirituality,” Sanders said, “is that we are all in this together and that when children go hungry, when veterans sleep out on the street, it impacts me.”

Clinton, asked by a rabbi in the audience about balancing the humility and ego, spoke about the daily scripture lessons she receives by email and notes sent to her by rabbis. She quoted a parable by Jesuit Henri Nouwen, saying: “So regardless of how hard the days are, how difficult the decisions are, be grateful. Be grateful for being a human being, being part of the universe. Be grateful for your limitations. Know that you have to reach out to have more people be with you, to support you, to advise you, listen to your critics, answer the questions.”