Shul’s Out Forever? Millennials Customize and Curate Faith To Create Their Own Judaism 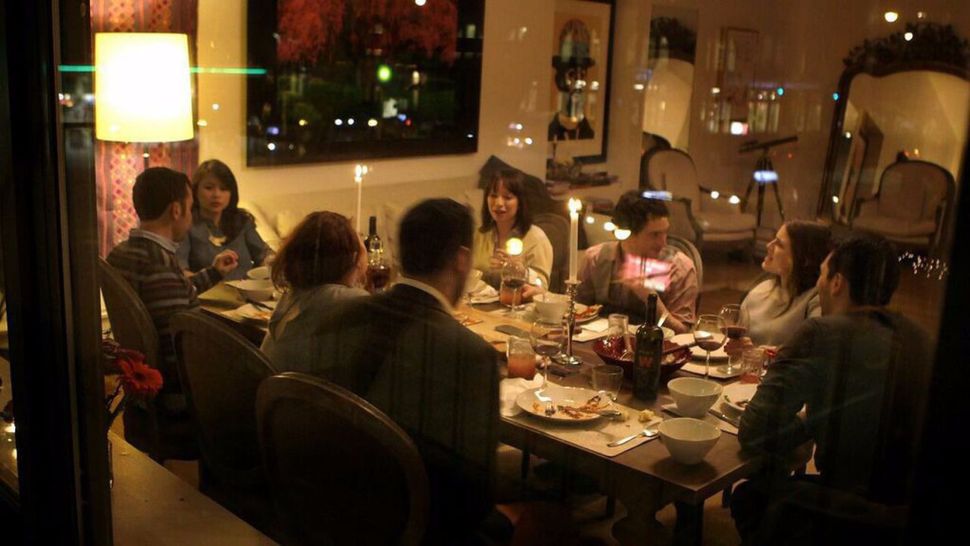 Image by Emily Goodstein for One Table

New York’s Jews are finding creative new ways to connect with Judaism independent of synagogues – from musical Shabbats for young families in an upscale Brooklyn condo building to pot luck suppers and lots of singing with hundreds of 20- and 30-somethings around the corner; and from a monthly Ecstatic Mincha that pairs dancing with prayer to a private Kol Nidre service for Russian families on the Upper East Side.

These and countless other one-off and occasional events are part of a burgeoning wave of gatherings that, much like the pop-up boutiques in vogue in recent years, generate buzz and create impromptu communities.

The Jewish equivalent is not a movement, per se, since there is no coordinating body, but an important trend from which synagogue leaders must learn, experts say.

Pop-up events are driven by the generation that has grown up ordering Starbucks drinks precisely to their liking and creating Spotify playlists with only the music they want to hear, who aren’t finding their spiritual and social needs met by traditional Jewish establishments.

“This is the age of hyper-curation,” says Seth Cohen, senior director of the Charles and Lynne Schusterman Family Foundation, which has provided micro-grant funding to some of the efforts. “If you can curate everything in your life, why shouldn’t you be able to curate your Jewish experiences?”

An informal survey of plugged-in people around the country indicates that much of this pop-up Judaism is happening in New York, particularly Brooklyn – not surprising, since the borough has the largest number of Jews ages 18-44 of any New York area location, according to the most recent Jewish community study here.

But interesting things are percolating in other places, too.

Artists and custom jewelers Judith Prays, 29, and Yonaton Mallinger, 28, who recently became religiously observant, attend a Chabad synagogue in Los Angeles’ Pico-Robertson area. Last September, inspired by a painting of the Baal Shem Tov (the 18th-century founder of Hasidism) flying into the sky in a horse-drawn cart, they rented a horse and wagon to clop around their neighborhood and raise awareness of the Besht’s birthday and Chabad message of doing good deeds.

“Kids loved it, would get in the carriage,” said Prays. “There’s a lot of different kinds of Jews in the neighborhood – Litvish [Lithuanian], Chabad, Persians, Israelis. People on the wagon started conversations that wouldn’t ordinarily happen” because people tend to stick to their own sub-communities, she explains.

Becky Havivi, 25, a Crown Heights, Brooklyn resident who works as a community organizer, hosts an informal Friday night service and potluck dinner for 20 to 30 people every other month or so. She is also a member of Mishkan Minyan, a more-organized prayer community of “emerging adults” in the Park Slope area of Brooklyn.

“The age group I’m part of is transient,” she says. “People are in New York for a year or three. Investing in a shul or community has more of a rooted quality that is absent from my age group. It’s not where people want to put their energy.”

There’s also a preference for observing Shabbat on Friday nights, she said, rather than attending services on Saturday morning. “For people who are happy to stay up until midnight with a tisch [communal fellowship] singing and then sleep late, Friday night is more central,” she said.

Havivi attended Jewish day school and Jewish summer camp, but is ambivalent about the conventional community and weekly sameness of synagogue services. “I’ve had push-pull relationships with Jewish communities,” she said. “Having a community where all genders are equally able to participate in ritual is important to me. Having a politically progressive community that is spiritual and not just doing ritual in a rote way is also important.”

An artists’ pop-up beit midrash was recently started by Conservative-ordained Rabbi Sara Zacharia. She held one in the Repairing the World storefront in Crown Heights and another in a downtown Brooklyn venue. She had a musician friend play jazz, proffered art supplies and wine, did a little Torah teaching and let the 20 or so attendees create their own works of Jewish art.

“This is for people who are not interested in synagogue. If you had ‘synagogue’ on the poster, people would not walk in,” Zacharia, who is in her 50s, told Haaretz. “It’s open, it’s friendly – if I can get a bar in there, that’s even better.” She got a bit of financial support from a local synagogue and from Footsteps, an organization that supports those who, like Zacharia, left ultra-Orthodox communities, and accepted contributions for her first effort. But she expects to start charging participants $25 to cover costs.

“They’re attracted because it’s nonestablishment,” Zacharia said. “If millennials are interested in the organized Jewish community, it’s only from afar.”

Jessica Minnen, 33, started a dance-prayer gathering that she calls Ecstatic Mincha, held in downtown Brooklyn’s Mark Morris Dance Center. She said that a lot of young adults “have very specific associations with places that are designated to be Jewish. I love that there is dedicated space to create Jewish community. But I want to push back against the notion that there is one place that we go once a week or once a year to be Jewish.”

Others are now trying to tap into the trend. Since 2014, OneTable, a New York-based startup, has provided mentoring, support and grants that have enabled volunteer hosts to create 1,000 unique Shabbat dinners for some 12,000 participants in their 20s and 30s across the country, said OneTable executive director Aliza Kline.

The decade-old Moishe House, a network of 86 residences for post-college Jews around the world, recently started Moishe House Without Walls, to encourage alumni to create independent events and experiences for others.

Even that bastion of the establishment, Hillel International, has created a spinoff called Base Hillel (playing on the Ashkenazi pronunciation of Beit Hillel and the concept of home base). Adapting Chabad’s model, Hillel created two New York City locations in Williamsburg and Union Square, planting young rabbinical couples whose agenda is to meet young Jews where they are. Another is planned for Chicago, with further expansion anticipated, said Hillel International spokesperson Matt Berger.

“Congregations want to engage Jewish people in Jewish life, and they’re realizing that the conveyer belt that used to deliver Jews to their doorways doesn’t work the same way,” said Amy Asin, vice president for strengthening congregations at the Union for Reform Judaism. “We’ve moved from a point where congregations are questioning why we have to do that, to a place where they’re asking, ‘How do we do it?’”

But when young families are paying $36 each to participate in a pop-up havurah (small group), as they are for those Brooklyn condo Shabbats, rather than pay hefty synagogue dues, it raises substantial questions for conventional congregations.

“This is one of the most fortunate, highly educated Jewish communities in all of Jewish history, and they are quite capable of defining for themselves what it is they want in a community,” said Rabbi Andy Bachman, who created one of the first alternative gatherings (called Brooklyn Jews) in 2003, and now works as the 92nd Street Y’s director of Jewish content and rituals.

Some synagogues are endeavoring to make this kind of creative programming part of their offering. Seth Wax, rabbi at Brooklyn Heights’ Congregation Mt. Sinai, has helped provide funding and publicity for a couple of pop-up experiences in the area, such as monthly Shabbat dinners, with live music, in Brooklyn Bridge Park that each attracted 70-100 people.

Informality is key, said Rabbi Laurie Phillips, who led those Shabbat picnics with musician Daphna Mor, and runs Shabbat gatherings called Beineinu, on the Upper West Side and in Harlem. She also provides a la carte teaching and officiation for bar/bat mitzvahs, weddings and other life-cycle events.

The Shabbat evening picnics have attracted “every age, every household configuration,” she said. “Typically, a synagogue space is not informal that way. You can’t take off your shoes or be sitting on the floor.”

Schusterman’s Cohen says the successful pop-up experiments “foreshadow the type of programming that establishment Jewish organizations will either need to provide or they’ll end up being irrelevant. We live in a world where consumers are seeking ways to be creative.” And if institutions don’t shift their approach from one that provides experiences to one providing a platform for creative experimentation, he said, “they’ll be just another part of Jewish history.”

Shul’s Out Forever? Millennials Customize and Curate Faith To Create Their Own Judaism