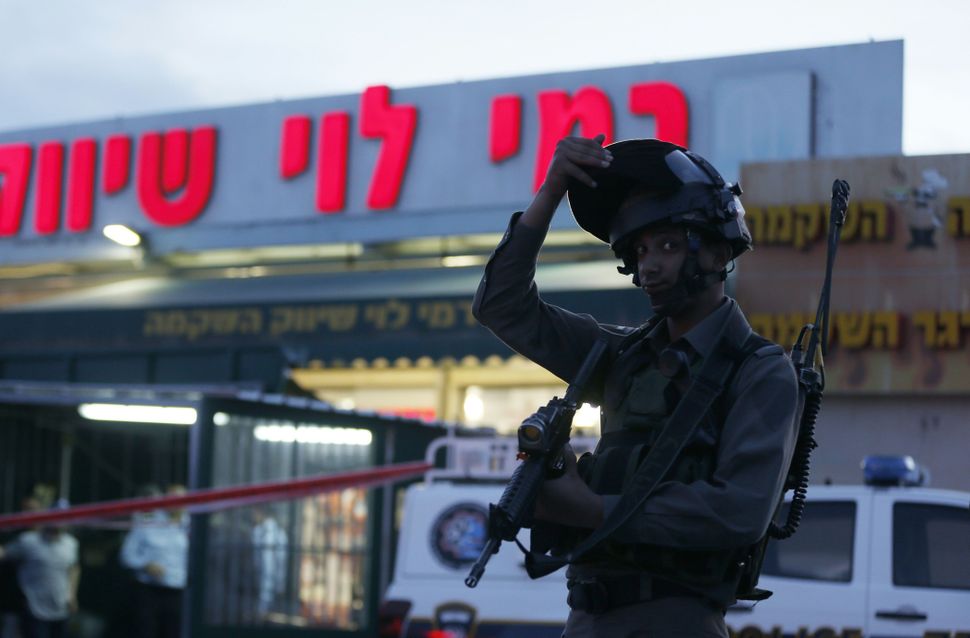 On a recent Sunday afternoon at a Rami Levy supermarket in the West Bank, an Israeli soldier patrolled next to a rack of toothpaste, on a two-for-one sale. Outside, Israeli and Palestinian customers walked through a new black metal detector on their way in; it was installed just an hour before.

Rami Levy, the founder of the eponymous discount supermarket chain, touts his stores as an example of coexistence in the Israeli-occupied West Bank, where Jews and Arabs work and shop together. It’s an image that Palestinian activists have rejected as a mere illusion of harmony when Israelis control the land that they claim for their future state and continue to dispossess Palestinians of their property.

Several assaults have taken place near or in Rami Levy stores. The latest was on February 18, when Palestinian teenagers entered a Rami Levy store in the Sha’ar Binyamin Industrial Zone in the occupied West Bank and stabbed two Israeli Jews. One of them, a 21-year-old soldier in civilian clothes, died from his wounds. Photos of the incident that Israeli police distributed to the media showed a puddle of blood in the cracker aisle and a knife on the floor near shelves of detergent.

Reached by email, Levy said it was “business as usual” at his stores, and that Jewish and Arab moderates would “not let terrorism win!”

But a visit to the stores revealed an anxious scene. Three days after the attack, Yael Ben Yashar, the spokeswoman of Beit El, a Jewish settlement north of Sha’ar Binyamin, was loading pink grocery bags in her car outside the Sha’ar Binyamin Rami Levy, which was uncharacteristically empty. When she told her family where she would be shopping that afternoon, “My kids said, ‘What are you crazy? Are you out of your mind?’”

Ben Yashar said that she shopped at Rami Levy in spite of its reputation as a place where Jews and Arabs mix, not because of it. “I’m not happy with this situation where they are together with us,” she said. Now, the recent attacks have added another layer of tension to her twice-monthly shopping trips. “I’m not going to refrain from going in here because they’re Arabs,” she said. But she said she would be extra vigilant.

At another West Bank Rami Levy about 20 miles south, in a shopping center at Gush Etzion Junction, the volatile situation has caused one Palestinian worker to decide he’s leaving. In the past four months, the junction has been the site of at least 10 Palestinian attacks, according to the Israeli Ministry of Foreign Affairs, including one right outside the Rami Levy store. The bus stop there, a popular hitchhiking spot for Jewish settlers, now resembles an army checkpoint. A soldier in camouflage trained his rifle on the traffic circle, where Israeli and Palestinian vehicles flew by.

It was the “roundabout of death,” said Hamada Zabayne, a 28-year-old Palestinian worker. In two weeks, he said, he will resign from the grocery to open a bakery with his family in his hometown of Hebron. “The situation here was very good, peaceful and good, until the beginning of the third intifada,” he said. “Then it became a situation of fear.”

Zabayne was afraid he’d be caught up in the violence, mistaken for a Palestinian attacker by one of the many soldiers now guarding the junction. “I’m concerned if there is an operation here, the soldier will see me and that I’m an Arab and he will also shoot me,” he said.

According to several Palestinian workers, this fear was one factor driving away Palestinian customers who once flocked to Rami Levy from Hebron, Bethlehem and the surrounding villages. Another was the intensified security checks near the junction. During my visit to the store in February, after the knifing, a car with a Palestinian license plate was stopped, and two soldiers questioned the driver. The next car, one with Israeli plates, was waved through.

“Soldiers check our IDs, they check the ride, they check us on the roads and on the checkpoints. They don’t care if you work here or not,” said Fadi, a Palestinian cashier who declined to give his last name to avoid exposing his family to Palestinian criticism of his employment at a settlement business. “For me it’s a kind of humiliation.”

“There aren’t any Palestinian customers here at all,” said Moussa Tbake, a Palestinian butcher. Shifting to politics, he criticized Israeli soldiers who killed Palestinian attackers without due process. “The events here that we are talking about are executions,” he said.

Just then, a customer wearing a skullcap passed by and overheard the interview. “Why is he lying?” he shouted, then rushed off to find the store manager. He returned with a security guard, and other workers amassed to gawk at the scene. The journalists were “garbage” and Tbake was a “potential terrorist,” the customer said, claiming that he had gotten Tbake fired.

Soon after, a Jewish cashier declined to give an interview. “I heard the journalists are leftists,” she said.

Though the so-called coexistence at Rami Levy looks especially precarious today, it has had other wobbly moments. Levy — who also serves on the Jerusalem City Council — opened his first store in Jerusalem’s Mahane Yehuda market in 1976. The son of an Iraqi Jewish mother and an Israeli-born Jewish father, Levy grew up with five siblings in a one-room apartment in Jerusalem, according to an article in Haaretz. He was inspired to bring discount prices to customers by watching wholesale deals between vendors on trips to the Jerusalem market as a child. From that first store, Rami Levy grew into a large chain across Israel with 40 stores and 6,000 employees. According to Levy, about 70 percent of the employees are Jewish and 30 percent are Arab.

Rami Levy has several locations in the occupied Palestinian territories, where Israelis live in Jewish-only settlements considered illegal under international law. These stores have drawn controversy. Lehava, a group that opposes intermarriage between Jews and Arabs, picketed the store in the Beitar Illit settlement. In 2011, the Gush Etzion store separated Jewish cashiers from Arab baggers after word spread that a Jewish woman and an Arab man working at the same checkout station had begun a romance. On the Palestinian side, a Palestinian Authority minister warned Palestinians against shopping at Rami Levy, calling the phenomenon “a big disgrace.”

Zabayne, the worker who’s leaving Rami Levy, said Palestinian pressure never phased him. “Whoever says such a sentence to me, I say, ‘Give me 5,000 shekels a month,’” which is roughly his salary at the grocery store.

Meanwhile, Tbake said he wasn’t worried about his job after the kerfuffle with the Jewish customer. He had been working at Rami Levy for 10 years — though as a butcher he is technically employed by the Baladi meat company — calling his Jewish employers “part of the family.”

But, he said, “It’s difficult to tell the truth here.”