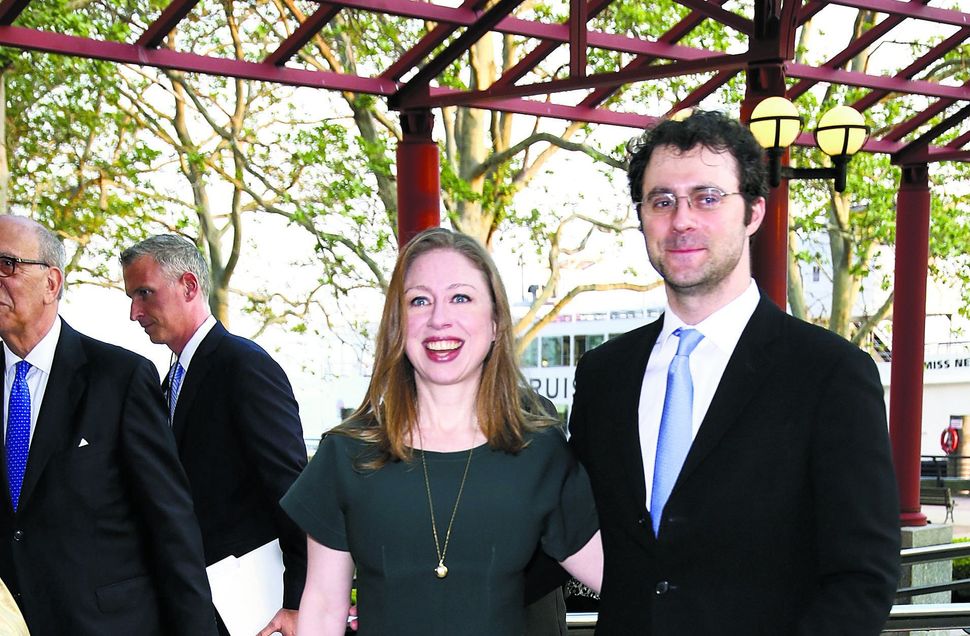 Charity Yes, Politics No: Chelsea Clinton and Marc Mezvinsky attend a gala for the Statue of Liberty-Ellis Island Foundation last May. Image by Getty Images

Though she’s pregnant with her second child, Chelsea Clinton, the former first daughter, has taken center stage in the current election cycle, campaigning for her mother frequently during this primary season. So has the former president, and would-be first first husband, Bill Clinton.

But one member of the Clinton clan has been notably absent, even on the stages where family members serve as a backdrop for Hillary Clinton’s victory speeches. Marc Mezvinsky, Chelsea Clinton’s spouse and son-in-law to the Democratic front-runner, has stayed home in New York.

This absence is not due to any lack of prior involvement in politics. Like Chelsea Clinton, Mezvinsky was born into politics and grew up surrounded by political ambition and the scandal that sometimes accompanies it. Both his parents were members of Congress, and his father later served time in federal prison for fraud. But as a campaign surrogate, Mezvinsky, a wealthy hedge fund manager and alumnus of Goldman Sachs, might not represent the image Hillary Clinton is seeking to project right now in her epic primary match against left-wing populist Bernie Sanders. Instead, the 38-year-old investment banker has been going to his job and tending to the couple’s 16-month-old daughter, Charlotte.

This out-of-the-spotlight role has typified Mezvinsky since his high-profile interfaith wedding to Chelsea in 2010, which initially splashed worldwide images of the happy couple under a chuppah as a rabbi and a minister looked on.

That contrasts with another famous Jewish son-in-law, Jared Kushner, who has showed up several times on the campaign trail on behalf of his father-in-law, the Republican front-runner Donald Trump.

But if Hillary Clinton returns to the White House, she will find several traditions instituted by recent occupants that could well highlight the first female U.S. president’s unprecedented Jewish family connection. After her husband left office in 2000, President George W. Bush started holding annual Hanukkah receptions, starting in 2001. And from his first year in office, President Obama added a new tradition of a White House Passover Seder, to which he has invited many Jewish members of the original Obama 2008 campaign and other family guests. A Clinton White House seder would bring Jewish involvement in the ritual into the First Family itself.

Mezvinsky’s own upbringing and adulthood were shaped by a strong Jewish background amid all the politics. And this has carried over into his married life with the most famous first daughter in America.

The nation learned much about this in Clinton and Mezvinsky’s private, but well-covered, July 2010 wedding. The ceremony was co-officiated by Yale University’s Jewish chaplain, Rabbi James Ponet, and Rev. William Shillady, a Methodist minister. Wedding photos released by the Clintons showed Mezvinsky wearing a yarmulke and covered in a prayer shawl standing under a chuppah with his bride-to-be.

In a 2012 interview with Time, after she was named co-chairman of New York University’s Of Many Institute, a multifaith initiative, Chelsea Clinton said the importance of honoring both their faiths is a personal priority for her. “With all candor, because my husband is Jewish, and I’m Christian, and we’re both practicing, it’s something that’s quite close to home.”

Nevertheless, though spotted at times in synagogue, Clinton and Mezvinsky rarely make their faith a public issue.

To be sure, the birth of their daughter, Charlotte, in 2014, complicated this determined reticence. With her arrival came a very public discussion over the faith of the young family and the religion of the brand-new Clinton scion. National media outlets wondered out loud “What’s Charlotte’s Religion?” a question to which the most common answer was “both.”

Orthodox Jewish publications took issue with that. According to traditional Jewish law, they pointed out, a child’s religion is determined by the religion of the child’s mother, rendering Charlotte unequivocally non-Jewish, at least in Orthodox eyes. Yariv Levin, an Israeli cabinet minister from the Likud party, even used the Clinton-Mezvinsky family and their interfaith wedding ceremony to blast American Reform Jews. “A man who calls himself a Reform rabbi is standing there with a priest and weds Hillary Clinton’s daughter, and no one condemns it, thereby legitimizing it,” Levin thundered from the Knesset floor. He cited the Clinton wedding as proof of Reform Judaism’s certain demise.

Mezvinsky’s father, Edward, was a son of a Jewish grocer in Ames, Iowa, who went on to represent the state’s 1st Congressional District in Congress for four years. Ed Mezvinsky, a Democrat, was involved in local politics before being elected to Congress in 1972. After losing his seat in 1976, Mezvinsky moved to Philadelphia with his second wife, Marjorie Margolies, and served as chair of the Pennsylvania Democratic party. There, in the early 1990s, Mezvinsky became involved in numerous scams that defrauded friends and investors of $10 million. He pleaded guilty in 2001 to charges of bank fraud, mail fraud and wire fraud, and was sentenced to an eight-year prison term. Mezvinsky was released under federal probation in 2008.

Marjorie Margolies, a television journalist, followed her husband into Democratic politics. Representing the 13th Congressional District in Pennsylvania, she served as a one-term congresswoman from 1993-1995. Ironically, it was her future in-law Bill Clinton who may have brought a premature end to her political career. She was a deciding vote on President Clinton’s contentious first-year budget in 1993, which raised the marginal tax rate on the wealthy to increase revenue and reduce the government deficit. Margolies-Mezvinsky supported it only after being lobbied personally by the president. The vote was unpopular among her constituency, and eventually cost Margolies-Mezvinsky her seat.

In 2014, the relationship with the Clintons came full circle when Hillary Clinton held a fundraiser for Margolies (now divorced), who was trying to win back her seat. But even the support of the Democratic Party’s most powerful family was not enough; she lost the primary.

Still, if ties between the Clintons and the Mezvinskys were not fruitful

on the political field, they did yield one significant outcome: the acquaintance between Chelsea and her future husband, Marc. The couple met as teens at a Democratic Party retreat attended by their parents. After college, their friendship evolved and made it to the gossip columns, and then the front pages, of the national media.

After graduating from Stanford in 2000, Mezvinsky started his career as an investment banker at Goldman Sachs. But in 2011, he joined several other partners to start their own hedge fund, Eaglevale Partners, which manages nearly $350 million in assets. According to a 2015 New York Times report, many of the investors in the new firm were close friends and donors of the Clinton power couple, including some who were brought on board by Mezvinsky.

Though eschewing an active role in the current campaign, Mezvinsky has never been shy about his ties with the presidential family. He frequently attends charity events sponsored by the Clintons and meetings of the Clinton Foundation alongside his wife, who is the foundation’s vice chair.

But so far, at least, he draws the line at politics.