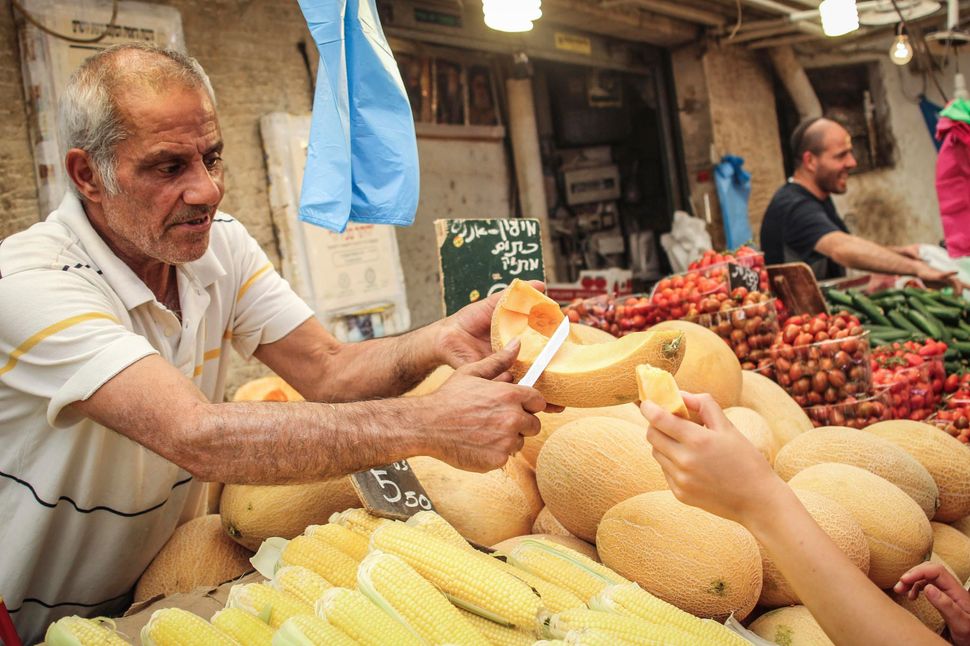 A stall owner cuts a piece of melon in the Iraqi part of Machane Yehuda shuk in Jerusalem, July 9, 2015. Image by Flash90

An Israeli Masorti Jew may be the one who goes to synagogue on Shabbat morning and then takes off his kippah and drives to watch his favorite team’s soccer game in the afternoon; or the teenager who will never forget to kiss the mezuzah mounted on every doorpost, even on the way out to a nightclub.

Identified as Israel’s second largest “tribe” in the Pew Research Center’s new, comprehensive survey of Israelis and their social and political demography, Masorti Jews are most easily defined by the space they occupy on the country’s Jewish spectrum: to the left of the Orthodox and to the right of the secular.

Israel’s Masortim, the Pew study found, are not as observant as the Orthodox or the Haredi tribes, but they’re far more likely to follow Jewish laws and traditions than secular Jews. Living between these boundaries, Masorti Jews find their individual way of maintaining Jewish traditions in modern life.

In the recent survey, Israel’s Religiously Divided Society, Masortim, which translates loosely as “traditionalists,” make up 29% of Israeli Jews and 23% of Israel’s general population.

Yet Masorti Judaism is hardly known in the United States and is often mixed up with the Masorti Movement, the formal name in Israel for Conservative Judaism, which has only a small presence in the Jewish state.

Masorti Jews are mostly Jews from Arab lands and their descendants, a group known as Mizrachim. Historically, Mizrahi rabbinic leaders have a tradition that has been generally less stringent and rule-obsessed than the traditions of European Jews, or Ashkenazim, and the lifestyle of Masorti Jews in Israel echoes this. It is characterized, according to the Pew survey, by a mixture of religious traditions that define the Orthodox community, and less-observant practices that are common among secular Israelis. But in contrast to members of the secular group, who largely view themselves as “Israeli first,” Masorti Israelis, to a great extent, self-define as “Jewish first.”

Pew describes the Masorti Jews’ level of religious observance as “medium level.” They tend to pray less often than the Orthodox, 53% of them travel on the Jewish Sabbath, and they are split on whether to allow public transportation on the biblically mandated day of rest.

Their politics tend to lean to the right and center, with the Likud being the most common political affiliation for Masorti Israelis. Consistent with this political alignment, Masorti Israelis are skeptical about the chances of achieving a two-state solution between Israelis and Palestinians—a skepticism they share with the Orthodox and the Haredim.

Steven M. Cohen of the Hebrew Union College Jewish Institute of Religion who advised Pew Research Center on the survey, defined Masortim as Jews who “violate the laws that they do not wish to change.” Currently there is no parallel in American Jewry to the Masorti tribe, Cohen noted. But up through the 1960s many American Jews defined themselves in practice if not in outright declaration as non-observant Orthodox. This phenomenon still exists in British Commonwealth Jewish communities such as England and Canada.

Masorti Jews, while still a significant portion of Israelis, have been in decline in recent years, dropping from 41% of adult Jewish Israelis in 2003 to 37% in 2013, in part due to the increasing fertility rates among Orthodox and Haredi Jews.

While the Pew survey identified a balkanization of the Israeli Jewish society with clear divisions between the country’s four component tribes, the Masorti group is, in fact, the only group that maintains close ties with all other tribes. Haredi, Orthodox, and secular Israelis reported that a large majority of their close friends come from within their own group (up to 90% among secular and 89% among the Orthodox). But Masorti Jews told the Pew pollsters that less than half of their close friends (48%) are Masorti, too.

They are also the most likely to marry outside their group, making them the only potential bridge able to connect between these divided tribes that make up the Jewish Israeli society.