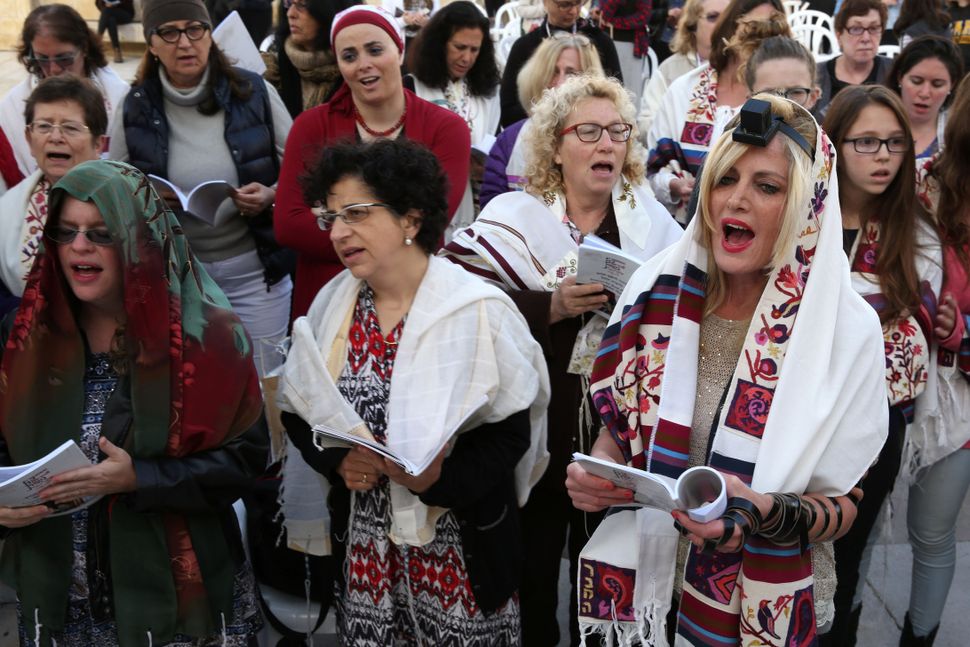 WOMEN OF THE WALL Image by Getty Images

And Women of the Wall activists are looking to Prime Minister Benjamin Netanyahu to back them up.

In January, Western Wall Rabbi Shmuel Rabinowitz agreed to a historic compromise with non-Orthodox leaders over the future of the holy site. On Monday, he denounced the deal.

In two strongly worded letters to ultra-Orthodox ministers, Rabinowitz lambasted non-Orthodox Judaism, criticized the compromise he agreed to less than two months ago and asked the Knesset’s haredi parties to pass a law repealing it.

“I call on you to act with similar determination to stop the desecration at the Western Wall, whose spiritual damage is inestimable,” Rabinowitz wrote Monday to the heads of the haredi United Torah Judaism and Shas parties.

“For years, I have stood up alone against the determined struggle of the ‘new’ [Jewish] streams and the tip of their spear, Women of the Wall,” a group that conducts monthly prayer services in the wall’s women’s section.

This may seem like a bad omen, but non-Orthodox activists remain unconcerned about the compromise falling apart.

After three years of negotiations with Rabinowitz, they believe he’s still committed to the deal. The letters, they said, are mere rhetoric meant to placate hardline haredim.

If ultra-Orthodox politicians propose such a repeal, said Women of the Wall chairwoman Anat Hoffman, it probably won’t go anywhere.

Prime Minister Benjamin Netanyahu endorsed the agreement and has since trumpeted it as proof of Israel’s commitment to respecting non-Orthodox Judaism. Hoffman doubts he’ll back a law canceling that achievement.

“We knew this would come,” she told JTA. “I don’t think it’s a real capitulation, but it’s a disturbing letter. I’m giving the prime minister the benefit of the doubt. The three-year process is not going to be tossed into the wastebasket just like that.”

“I think that this new crisis is mainly because of internal disputes between haredi leaders,” said Conservative Movement in Israel CEO Yizhar Hess, who was party to the negotiations over the deal. “I think there’s an interest on both sides to keep this deal.”

Rabinowitz’s office could not confirm whether he had withdrawn from the agreement and did not make him available for comment.

His letters come after a string of ultra-Orthodox leaders have criticized the deal and insulted Reform Jews. The day the Israeli government approved the deal, on Jan. 31, UTJ lawmaker Moshe Gafni called Reform Jews “clowns.” In late February, Israel’s chief rabbis asked the government to freeze the agreement. On Monday, Interior Minister Aryeh Deri said his Shas party would leave a government that recognized Reform Judaism.

Deri and his colleagues, said Hess, “threw Rabbi Rabinowitz under the wheels of the bus.” Hess told JTA that Rabinowitz received the haredi parties’ approval before signing off on the agreement. Now, those same parties won’t stop bashing it.

With the letters, Hess said, Rabinowitz places the burden of stopping the agreement on haredi politicians — absolving himself. If Shas and UTJ don’t like the agreement, they — not he — need to pass a law overriding it. Otherwise, he’ll remain committed to the deal he signed.

“The letter yesterday was a message to the leaders of the haredi parties: ‘Guys, its your responsibility. Go with your own strength, and do what you can,” Hess said.