Steamrolling on, Donald Trump Leaves Jews With No Easy Answers

Among the hundreds of supporters who came to what turned out to be Marco Rubio’s farewell from the presidential race at Florida International University in Miami on March 15, were three Jewish high school students, preparing to attend the American Israel Public Affairs Committee’s annual conference in Washington the following week.

Just like their older peers, they were still struggling to face the fact that Donald Trump is likely to be the Republican Party’s presidential candidate. “I’d be really disappointed in America for throwing away [its] moral ground and going for a candidate who is clearly a racist, a bigot, a misogynistic, chauvinistic, sexist, anti-Israel man,” Veronica Bondarenko said emphatically.

This high school senior articulated the dilemma many in the Jewish community now face, following the demise of Rubio’s campaign and the seeming inevitability of a Trump candidacy. 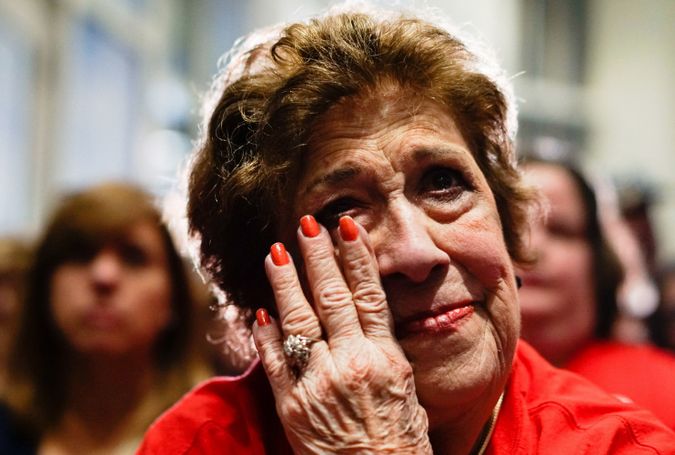 Supporter of Marco Rubio watches as he announces he's suspending his campaign. Image by Getty Images

It’s not only Jewish Republicans who will have a tough political choice to make. Jewish activists across the board, are now forced to decide whether to engage with, ignore, or boycott and protest the GOP frontrunner.

The first decision by a major Jewish player indicated a lean toward engagement. AIPAC made a call in favor of inviting Trump to speak at its annual policy conference next week, explaining that it was customary for the lobby to offer all candidates the opportunity to address the conference in an election year. AIPAC also preemptively warned student participants not to disrupt Trump’s speech, although the lobby later clarified it prohibits all participants from protesting guest speakers.

A move by the Reform Movement to distance itself from AIPAC’s decision made clear that not in all in the community are ready to take a business-as-usual approach to the New York billionaire.
“We have often listened to and, more importantly, engaged with candidates and officeholders whose views sharply differ from our own; such interactions are the essence of our political system. But Mr. Trump is not simply another candidate,” the movement stated, promising it would “find an appropriate and powerful way to make our voices heard.” Constructive engagement with Trump and his campaign has proven difficult for Jewish groups thus far. Trump all but ignored the Anti-Defamation League’s repeated calls for him to clearly disavow racist and white supremacist groups. And he has met criticism in pro-Israel circles of him pledge to remain neutral in Israeli – Palestinian negotiations if elected president with only a public assurance that he is “the most pro-Israel candidate.”

As election cycles moves to closer to their final phases, Jewish groups usually look to forge ties with the leading campaigns in order to ensure they have active communication channels with the future administration and to provide their input on domestic and foreign policy issues that the next president will be required to deal with.

So far, these channels have yet to be established with Trump and his team. But by the summer, the question of reaching out to the leading Republican will be unavoidable for every Jewish advocacy organization.

No one feels this dilemma more acutely than Jewish Republicans. Initially pinning their hopes on Jeb Bush and later flocking to Marco Rubio, Jewish GOP supporters and donors are quickly running out of options.

And while some Jewish Republicans have joined the “never Trump” camp, others are showing initial signs of warming up to the idea of having the Donald as their party’s candidate. Asked during a Las Vegas debate Matt Brooks, executive director of the Republican Jewish Coalition, passed on an opportunity to take a stance against Trump.

“It’s a ‘we are going to have to wait and see’ answer,” Brooks said. Brooks explained that his group has a policy of not taking sides during the primary race and a history of speaking out when they disagree with candidates, but he also made clear he does not feel uncomfortable with Trump. RJC’s largest donor, casino billionaire Sheldon Adelson, has run supportive articles on Trump in Israel HaYom, the daily newspaper he owns on Israel, including a flattering one-on-one interview with the candidate. And at a gala in February in honor of former New York mayor Rudy Giuliani, Adelson reportedly said, “Why not?” when addressing the question of whether he would support Trump, if Trump is the party’s nominee.

Jewish Democrats are watching Republicans struggle with the Trump problem with more than a little schadenfreude. “Trump isn’t helping himself with the Jewish community with his positions on human rights and minorities,” said former Democratic Florida congressman Ron Klein who is now chair’s the state’s Democratic Party’s board of trustees. “The only way for those who want to boycott him is by the ballot box.”

Steamrolling on, Donald Trump Leaves Jews With No Easy Answers