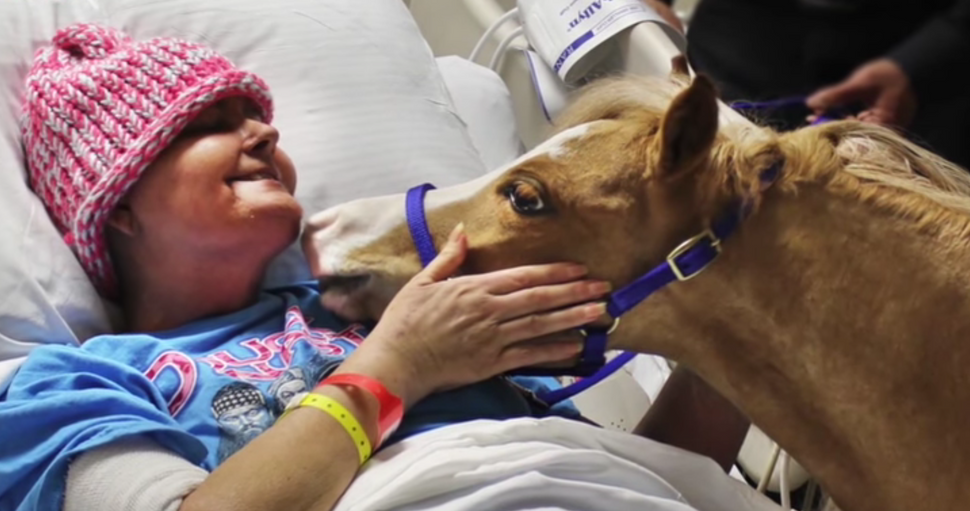 Some of the most powerful medicine delivered to young patients at Mount Sinai Hospital in New York City on Wednesday came in a package less than 32 inches tall and with a tail.

Honor, a 10-month-old colt with , trotted into the hearts of dozens of children and teens being treated at the Jewish hospital in Manhattan.

Just a handful of young patients were well enough to secure their doctors’ permission to meet Honor in person in a hospital playroom, while others watched him from their beds, viewing an internal television broadcast in their rooms and isolation units.

Maria Bente, who is 19 but looks much younger, broke into a smile when Honor pranced into the playroom. The hospital declined to elaborate on details of Bente’s medical condition, saying only she is currently being treated as an outpatient.

While Maria said her favorite animal is a horse, this one was quite different from what she expected.

“They are little horses, but they have big jobs,” said Jorge Garcia-Bengochea, co-founder of Gentle Carousel.

Miniature horses have comforted trauma victims after such tragedies as the 2012 mass shooting at Sandy Hook Elementary School in Connecticut, the 2013 tornadoes that devastated Oklahoma and the 2015 church shooting in Charleston, South Carolina. They also work with families of police officers who have died in the line of duty.

“They are herd animals, so they are very intuitive of what other horses are doing, needing. And they treat people that same way. They sense different emotions, different feelings that children have,” Garcia-Bengochea said.

“Children have been through very traumatic situations and they’ve shut down. Just being around the animal, they get animated, they start talking and they actually sometimes tell the horse things that they haven’t told other people,” he said.

In the hospital, the tiny equines serve as a symbol of hope and beauty, conjuring up an image of outdoor activities, running and strength, said Diane Rode, who heads up the hospital’s child creative arts therapy unit.

“When you’re in the hospital, you’re dealing with pain, anxiety, isolation, and it’s easy to get stuck in that. Focusing on the miniature horses creates a relationship back to the world and an interest and pleasure in the world we are working to foster,” she said.