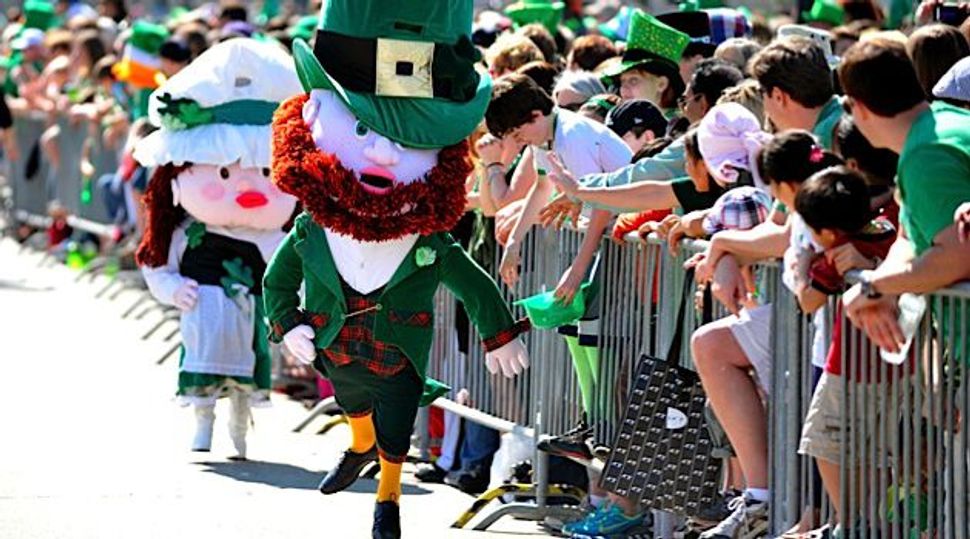 Between the national election and the commemoration of the 100th anniversary of the Easter Rising, the Irish — a famously loquacious bunch — have much to debate over their pints of Guinness these days.

But for 89-year-old Freddy Rosehill and his best friends in Cork, there is just one subject of conversation these days: what to do with the four Torah scrolls and the bimah from their synagogue.

After 120 years, the only synagogue in Cork — a city that welcomed some of the first Jews in Ireland — closed last month.

A handful of old-timers who had moved away over the years, or married out and drifted away, returned to attend one last service, along with a delegation from Dublin. And then, the prayer books were packed up, the chairs folded and the synagogue was shuttered.

“I am not going to say it was not sad. It was terrible sad,” says Rosehill. “It’s the end of something that was pretty special.”

While references to Jews in Ireland date to 1079, the first permanent settlement was established in the late 15th century by Marrano Jews expelled from Portugal.

William Moses Annyas Eanes, whose grandfather had emigrated from Portugal, was elected mayor of Youghal, County Cork in 1555, becoming the first Jew to hold public office in Ireland.

The Jews were never a massive demographic force here. For centuries, the community numbered in the hundreds. Even at its height, in the early 1940s, there were only an estimated 5,500 Jews on the entire island. The majority arrived from Lithuania in the late 19th century, escaping persecution and disembarking in Cork — either because they sensed the upcoming warm embrace, as some would have it, or because they mistakenly believed they had reached New York.

A statue of Ireland’s James Joyce, author of “Ulysses,” in Zurich’s Fluntern cemetery, where he is buried, June 16, 2004. Reuters “It was lively here for a while. We had a social center, a debate team, table-tennis tournaments and a mayor,” recalls Rosehill, referring not to Eanes but to Gerald Goldberg, who was elected mayor of Cork City in 1977. The bridge in town, named after Goldberg, is known as the “Passover Bridge.” Besides Cork, there were small communities in Drogheda, Waterford and Limerick — where, infamously, there was an economic boycott against the Jewish community in 1904. Jews also settled in Northern Ireland, in Belfast and in Derry. But the majority of the community went to live and work in Dublin. Arriving as peddlers, leaving as professionals By the 1940s there were 11 synagogues in Dublin, says Stuart Rosenblatt, a Belfast-born, Dublin-bred businessman who has been painstakingly researching the genealogies of the local Jewish population for the past 25 years. His database contains the names of nearly 60,000 Jews who lived in, or had an association with, Ireland at some point between 1700 and the present day, along with such information as dates and places of birth, Hebrew names, professions and in many cases, burial plots. The Dublin of Rosenblatt’s youth included, in addition to the synagogues, kosher butchers and bakeries, Jewish tailors, Jewish bookstores, a mikveh, two Jewish schools, a nursing home for Jews and Jewish scouts and sports teams. As a local legend has it, many a young Irish kid growing up in the Dublin neighborhood known as “Little Jerusalem” earned pocket money working as “Shabbos goys” — that is, turning on lights, lighting ovens and performing other tasks forbidden to observant Jews on Shabbat and Jewish holidays. Second- and third-generation Jews became prominent in business, academic and political circles in Ireland. Perhaps most famously, Robert Briscoe rose within the Irish Republican Army and, under Michael Collins’ direction, became the main procurer of armaments for the IRA during the struggle for independence. Briscoe later served in the Irish parliament for 38 years and became mayor of Dublin. His son, Ben Briscoe, followed him into the legislature and the mayor’s office, becoming the city’s second Jewish mayor of Dublin. A half-century earlier, Otto Jaffe, a German-Jewish linen merchant, served as mayor of Belfast. Chaim Herzog, Israel’s sixth president and arguably the Irish Jewish community’s favorite son, was born in Belfast and grew up in Dublin, where his father, Isaac Halevi Herzog, served as Ireland’s first chief rabbi. But for all the little triumphs of the Jewish community over the years, the situation in Cork today is indicative of what remains. “The young boys and girls from Cork have scattered all over the world,” says Rosehill, who admits the community has been unable to gather a minyan, a 10-person prayer quorum, even on holidays, for years. “Most Jews came here as peddlers, and many prospered — and then their children and grandchildren left as professionals,” he says. “There was nothing for the young generation there, either socially or economically. The young left and their parents followed, or died.” The last census, taken five years ago, found around 1,900 affiliated Jews in the country, but the numbers are likely lower today, says Rosenblatt, whose own two children now live in London. Nostalgia and cappuccino With the closing of the synagogue in Cork, three synagogues remain in Ireland, all in Dublin. The Hebrew Congregation, an orthodox synagogue with some 150 members, is led by Zalman Lent, the country’s Chabad rabbi, who also serves as Ireland’s de facto chief rabbi. A second Orthodox synagogue, which does not speak to the first, has only 16 or 17 members. The third synagogue, which doesn’t communicate with the other two, is the liberal one and has about as many members as the main Orthodox congregation, in part because of its embrace of mixed marriages. It has had some success attracting foreign Jews, including Israelis, several hundred of whom have moved to Ireland to work for Intel, Google or Apple.

Northern Ireland also retains a synagogue, in Belfast, with about 50 registered members, according to Rosenblatt.

There is still a Jewish school in Dublin, but as a result of the community’s declining numbers many of its students are non-Jews and Jewish studies have been reduced to just one and a half hours a day. The Bretzel, a long-standing bakery in Dublin’s “Little Jerusalem,” remains open, albeit under new management and can only claim to be “kosher style,” offering challah and nostalgia to go with the cappuccino and the carrot muffins.

What increasingly defines the Irish Jewish community are memories, says Yvonne Altman O’Conner, the vice chairwoman of the Irish Jewish Museum,which is located around the corner from the Breztel bakery. The museum, housed in a former synagogue, is jam-packed with them, from fraying Hebrew books to prayer shawls with Irish stitching to rickety seats from a movie theater once owned by a prominent Jewish family.

Black-and-white photos of Briscoe and members of the Herzog family seem to be everywhere. As is information on James Joyce, whose famous fictional hero Leopold Bloom may or may not have been based on a real Dublin Jew.

Most of the artifacts once owned by the community are in storage — there is no room for them in the museum, and no funds to expand. School groups visit occasionally, and the museum hosts the odd lecture and wedding, but it’s quiet more often than not. During winter, it’s only open on Sundays. Potential haven for European Jews

Lent, the Chabad rabbi and de facto chief rabbi, is not discouraged by the statistics that suggest the community is dwindling. He believes there is potential to not only stem the tide, but reverse it.

Lent, who moved with his wife and children to Ireland from Manchester 16 years ago, sees his adopted country as a potential haven for European Jews.

“Ireland has never had a history of anti-Semitism,” he argues, “and if a Jew from, say, France, wants to continue running his business in Europe, but feels they want a welcoming place for the family to live — Ireland is an answer.”

Rosenblatt thinks Lent’s dream is “aspirational,” as he calls it, kindly. “Sure, taxes are high, salaries are low — of course they will come,” he jokes, adding, more seriously, that while there may be little overt anti-Semitism in Ireland, there have been incidents. Some argue that there is a correlation between the relative lack of such sentiment and the small number of Jews in the country. In 1948, the Irish Department of Justice said as much, infamously, refusing requests to grant several hundred Jewish children refugee status, with the justification that an increase in the Jewish population would lead to a rise in anti-Semitism.

Meanwhile, anti-Israel sentiment here can be strong. In 1982, following Israel’s invasion of Lebanon, the Cork synagogue was firebombed and Goldberg, the mayor received death threats. More recently, in 2014, hundreds of protestors demonstrated at the Israeli embassy in Dublin.

Rosehill has a son in London, and while his daughter remained in Cork, she married a non-Jew. His grandson, who for years was the youngest member of the Cork synagogue, just moved to Israel.

“I am always happy in Israel when I visit,” says Rosehill, who has made the journey dozens of times. “But I am also happy to come home.”

Although the synagogue in Cork has closed, there remains a Jewish cemetery in town, one of seven in Ireland. And among the approximately 500 graves are those of most of Rosehill’s family. “My wife is there, as are my father, sister and brother. Everyone I know, really,” he says. “Someday, I will rest there too.”