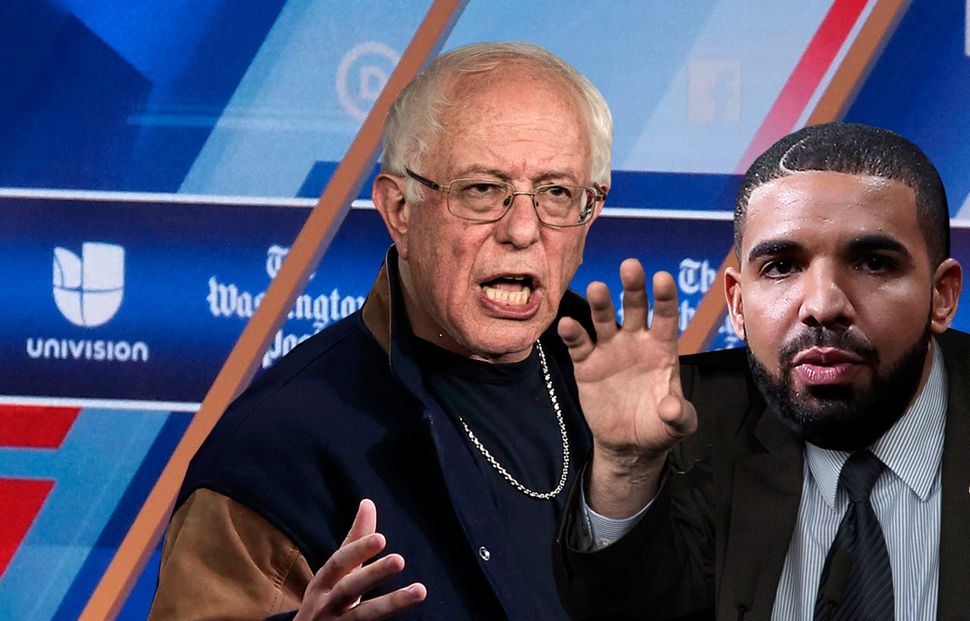 Even as the presidential race heats up, Democratic candidate Bernie Sanders has found his attention sidetracked by another bitter rivalry. For reasons that remain hazy, the Brooklyn-born Vermont socialist is locked in a beef with Canadian-Jewish rapper Drake. Their mutual friend Killer Mike has tried to broker a peace, but to no avail.

The beef recently reached a peak when Sanders and Drake met at an undisclosed neutral location (rumored to be Zingerman’s Deli in Ann Arbor, Mich.) to air their accusations in a freestyle rap battle.

I’d like to welcome Drake, or should I call you Aubrey?

Yeah, I know your real name. Did your fans not know? I’m sorry!

I always welcome immigrants, but you’re the big exception

I’ll deport you past the border when I win the big election.

My rhymes are gonna school you like when you were at DeGrassi,

You gonna #feeltheBern so hot you gonna call for Lassie.

Is that your hotline blinging? Yo, it might be your mommy,

Here to pick you up before I slice you like pastrami.

You laughing at my name and thinking that you is so damn hard?

That’s crazy talking nonsense from a man they call Bernard.

You best not mess with Drake, cuz I’m a proud son of Toronto;

What’s with these rhymes you dropping? You know that they ain’t kosher.

You better finish what you started if you want into this game, player,

Or when I finish with this beating you gon’ need our single payer.

You best head back to Killer Mike and learn to drop some beats,

You mess with Drake again and I will smoke you like our meats.

Your pop-gun raps mean nothing when I lay the big artillery,

Now get out from my face or I will beat you like I’m Hillary.