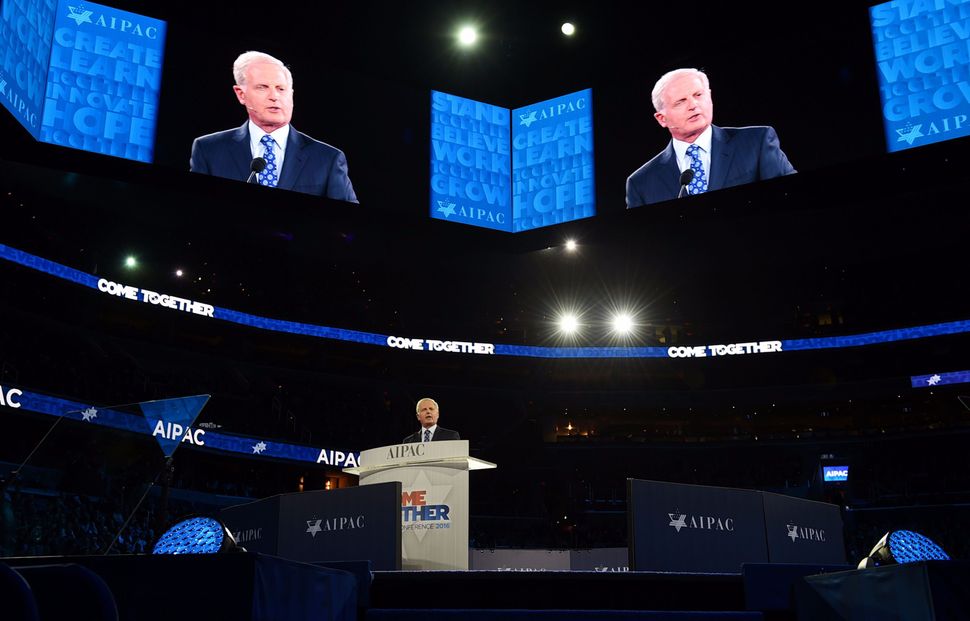 AIPAC CEO Howard Kohr speaks at the start of the AIPAC 2016 Policy Conference on March 20, 2016 in Washington, DC. Image by Getty Images

Conference leadership requested a civil reception for all speakers; subtly criticized Trump’s message and made the unusual move of not introducing presidential candidates who are also speaking — enabling them to avoid introducing Trump.

The pro-Israel lobby made clear that it expects the 18,000 participants to be on their best behavior and to treat all guests with respect. AIPAC felt a need for this message in light of growing calls among delegates and Jewish activists to protest and boycott Trump’s Monday evening speech.

“Our involvement in the political process remains the best way to advance alliance,” AIPAC CEO Howard Kohr explained as he opened the session, stressing the need for “building relationships with all candidates for federal office.”

Following his address, a multi-faith group of clergy took the stage with a call for a respectful and non-disruptive welcome to all speakers at the conference.

They probably have little reason to worry.

While many AIPAC members dislike Trump’s positions and feel uneasy with his rhetoric, most will stay in and listen quietly and those planning to boycott or step out, such as members of the Reform movement, will do so politely before Trump takes the stage.

Furthermore, with the major speeches delivered at a massive sports arena, the setting, with lights directed only at the stage, makes it practically impossible to notice empty seats or walk outs.

But that wasn’t the only message AIPAC had in advance of Trump’s address.

In statement and in choreography, the pro-Israel lobby made clear it holds opposing views on many of the issues that have framed Trump’s campaign. Israelis and Americans, said Kohr, “embrace tolerance and acceptance of all people.”

And in order to drive home the message, AIPAC conference organized then made sure to feature African-American supporters, Latino activists, and speakers on women rights, all mentioned by Jewish activists as groups that have taken offense by Trump’s campaign message.