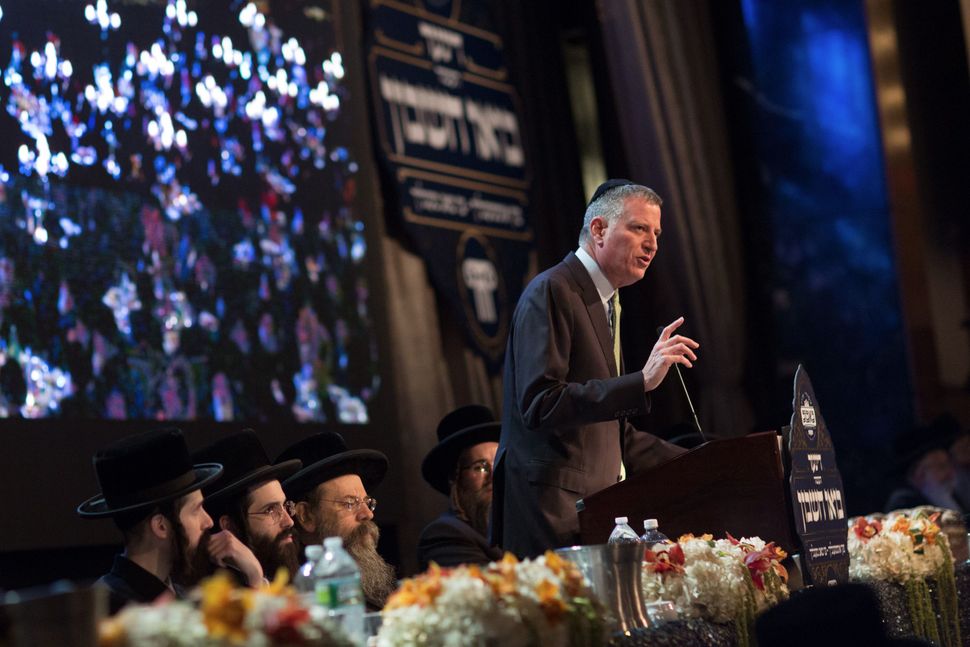 Now, de Blasio’s ties to the Bobov have put him on the defensive, amid a scandal over a nursing home chain run by a prominent Bobov businessman. Allure Group made $72 million in February flipping a Lower East Side home for AIDS patients to a condo developer. Now, the New York City Comptroller and the city’s Department of Investigation are investigating the deal, and de Blasio says that his administration was “misled” by the firm.

Allure’s CEO, Solomon Rubin, is a prominent member of the Boro Park-based Bobov Hasidic group, one of the city’s largest ultra-Orthodox sects. The Bobov enjoy a particularly close relationship with de Blasio, who represented Boro Park in the City Council from 2001 to 2009.

“Without me he wouldn’t be anyplace,” Fleischer said.

De Blasio now faces tough questions about the Allure Group deal. The company purchased the Lower East Side home in February 2015 for just $28 million, promising that it would use the building to operate a nursing home. In November, Allure paid $16 million to the Department of Citywide Administrative Services for permission to retroactively adjust the deed on the property. In February of 2016, thanks to the deed change, Allure sold the property to a condominium developer for $116 million.

“It makes me livid that this happened in one of the agencies that are part of my administration,” de Blasio told the local television station NY 1 on April 1, according to a transcript circulated by the mayor’s office. “We’re looking at all potential legal options related to the company that did this because we have a lot of evidence that they misled us.”

Days earlier, at a press conference at NYPD headquarters, De Blasio told reporters that he was upset to have heard about the flip only after it was made public.

The New York Times reported on March 31 that a prominent lobbyist who at different times worked for both the not-for-profit that sold the building to Allure and the developer that bought the building from Allure has raised $45,000 for de Blasio’s election campaign since October.

Allure owns six New York City nursing homes, according to the group’s website. At least one of its executives shares a surname with Solomon Rubin; another, Joel Landau, who has been Allure’s public face, is not a member of the Bobov Hasidic group.

Rubin did not respond to a message left at Allure’s office.

Rubin sits on the board of Bnos Zion of Bobov, the sect’s school system for girls. “They are very well off and they support a lot of things that are going on in the community,” said Yoel Rosenfeld, a Bobov community activist, of Rubin. “He’s very involved.”

Rosenfeld said that he escorted de Blasio in and out of the Bobov dinner on March 9, and that Rubin did not speak to the mayor. While he assumed Rubin was in attendance, Rosenfeld said that there were more than 1,000 people there, and he did not see him.

New York Senator Charles Schumer also spoke at the March 9 dinner, and Congressman Jerry Nadler was in attendance. The Bobov rebbe, Ben Zion Aryeh Leibish Halberstam, did not arrive at the dinner until after de Blasio had departed.