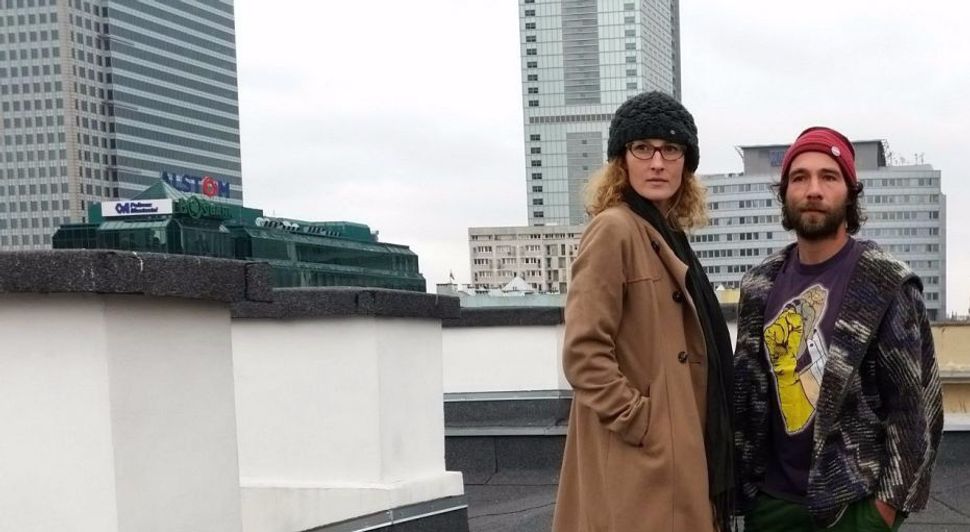 Two years ago, the serenity of the residents at 62 Zlota Street was disturbed. Krzysztof Gutkowski and Ida Zagrzejewska, a thirty-something Polish couple, entered the large building in the Polish capital with unusual news. “Nice to meet you, we are your new landlords,” they told the dozens of speechless tenants.

“They were afraid we had come to kick them out,” Zagrzejewska, a tango teacher, tells Haaretz. “Naturally, they were wary at first,” adds Gutkowski, a hipster who refuses to give up his sandals even when it snows, and who makes a living running summer camps for kids. “True, we are the new owners and have our own story, but the tenants have their own story too,” Zagrzejewska says, trying to capture a complex and sensitive historical situation that spans many years in a single sentence.

In recent years, there has been an increasing number of stories about Polish Jews successfully reclaiming ownership of properties their families had owned before the Holocaust. No precise data exists on the extent of this phenomenon, partly because there is no law or government body that deals directly with such matters in Poland (every case is handled individually by the courts). The demand that the government legislate compensation for property in such cases has been rejected so far, mainly because the government’s position is that Poland itself was a victim of the Nazis and, later, the Soviet regime.

In the 1950s and ’60s, the Polish communist government nationalized the assets of Jews who had been dispossessed during the Holocaust, and placed new tenants in their buildings. To this day, some Poles are living in homes and apartments formerly owned by Jews, and they worry about the day when they may be asked to move out. This helps breed not only hostility but also anti-Semitism.

In the past, restitution claims ran into numerous obstacles – both bureaucratic and otherwise. But with the fall of the communist regime and Poland joining the European Union in 2004, the atmosphere slowly changed and the Polish media is now reporting more and more cases of assets being restored to Jews.

Gutkowski only discovered he was Jewish a decade ago. At the time, he was studying anthropology at the University of Warsaw and was interested in the city’s “alternative history.” He was particularly drawn to the Jews who once filled the streets. When he told his mother about an article on young Poles who were rediscovering their Judaism, she took a deep breath and informed him that she was Jewish and her mother was a Holocaust survivor.

“I was in shock, I felt like a chosen person,” he recounts. Gutkowski searched for documents on his family at the Jewish Historical Institute, visited the Jewish cemetery of Warsaw looking for abandoned gravestones, and even joined the local Jewish community.

He found family members across the globe, and the deeper he dug into his family tree, the more he uncovered about the remarkable story of the Kaabak family on his mother’s side. They were engaged in the textiles trade prior to World War II and owned 62 Zlota Street, which has some 40 apartments and 80 tenants. The family themselves lived in some of the apartments and rented out others. But their world collapsed in 1940 when they were forced to move to the Warsaw Ghetto. Only Gutkowski’s grandmother and her father survived the Holocaust.

After becoming the property’s owner in 2014, Gutkowski soon discovered that the building is also a pilgrimage site for Holocaust tourists, both from Israel and elsewhere. Every day, hundreds of visitors fill the building’s courtyard and scramble to take pictures next to one of the last remaining remnants of the Warsaw Ghetto wall.

Gutkowski is torn between his duty to preserve his family and national history and the needs of his tenants, who complain about the noise. “I have already had an offer to move [the wall] to a museum, or to block access to the courtyard. All sorts of ideas for solving the ‘Jewish problem,’” he smiles.

One of the last remaining parts of the Warsaw Ghetto wall, accessible via the courtyard at 62 Zlota Street. Ofer Aderet Five years ago, he visited Israel for the first time with Birthright. After the program ended, he traveled independently around the occupied territories. He visited Israel again this year, this time with his girlfriend, taking a bicycle tour around the country. Just one thing overshadows his trips: “They question me for hours at the airport because I was traveling in the West Bank as well. I showed them my membership card for the Warsaw Jewish community, but it didn’t impress anyone.”

For now, aliyah to Israel is not on the cards. “My grandmother could have left Poland and come to Israel, but she decided to stay,” he reflects. “Today I honor her decision and feel that I also need to stay. The house is a prize for this choice.