In Brooklyn and Vegas, Cruz Seeks To Grow His Jewish Base 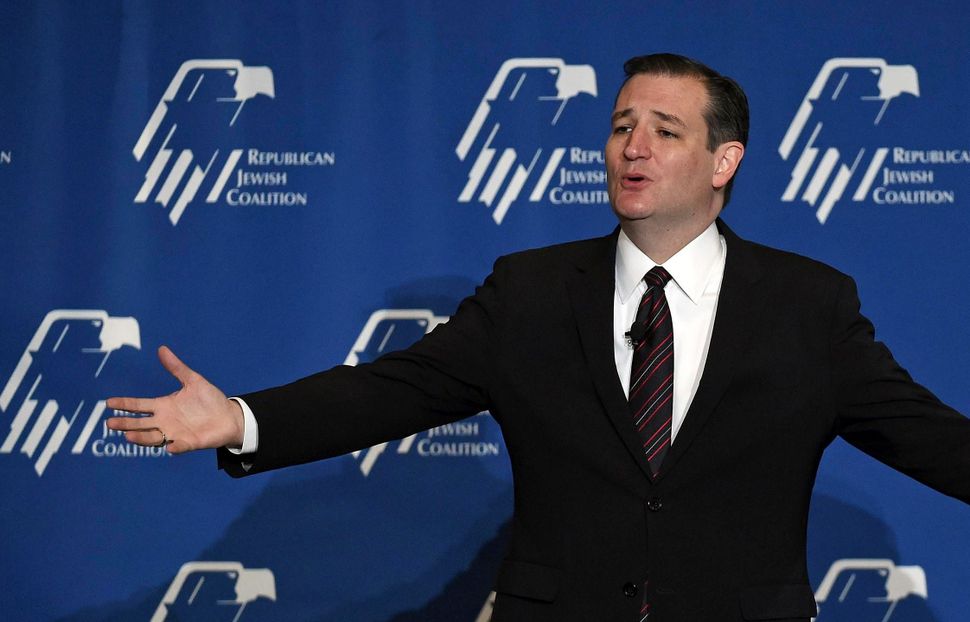 Fresh off his massive victory in Wisconsin, Republican candidate Ted Cruz is seeking to consolidate his backing among Orthodox Jews and expand support from other major Jewish donors by meeting with voters in both Brooklyn and Las Vegas, just in time for the New York primary coming up on April 19.

Early on in the Republican race, Cruz struggled to find his footing among Jewish voters, registering success with Orthodox donors and activists, but less so with Republican Jewish Coalition board members and other donors who chose to side with establishment candidates including Jeb Bush and Marco Rubio.

But the pack thinned, and neither Donald Trump nor John Kasich made any active outreach effort to the Jewish community. Cruz began making inroads beyond his Orthodox constituency.

“We have a lot of support in the RJC and we’ve seen growing support and people moving over to us in recent months,” said Nick Muzin, Cruz’s senior adviser who is also in charge of the candidate’s ties with Jewish voters. “I think this support will only grow,” he added.

He won the endorsement of both RJC board member Fred Zeidman, a Houston major Republican donor who had initially supported Bush, and his son Jay, who was part of the George W. Bush administration.

The Texas senator, now riding a wave of support as leader of the stop-Trump campaign, will attend a closed-door meeting with Orthodox Jewish leaders in Brooklyn on Thursday. On Saturday, he will deliver the keynote speech at the annual spring meeting of the RJC, where he will be the only candidate in attendance. Donald Trump and John Kasich were invited but chose to stay on their campaign trails.

Cruz’s meeting Thursday in Brooklyn, which will be closed to the press and is expected to entertain mainly Orthodox supporters, is part of a broader outreach effort the campaign plans for New York Jewish voters before the state’s primaries.

“Catholic schools and Jewish Day Schools, Brigham Young and the Little Sisters of the Poor will see a Supreme Court that protects their religious liberty, the fundamental freedom of every one of us to live according to our faith and our conscience,” Cruz said in his victory speech delivered after the Wisconsin results came in Tuesday night. He did not elaborate on the religious freedoms Jewish day schools are deprived of nor on the issues the Supreme Court is expected to help with, but as Cruz heads to New York he is likely to encounter Orthodox Jewish voters concerned about funding and curriculum requirements for parochial schools.

For Cruz, the Saturday address, which will touch on issues close to the hearts of Jewish Republican voters such as the Iran nuclear deal and combating attempts to boycott Israel, is yet another opportunity to win over GOP mega-donor Sheldon Adelson who will be hosting the gathering at his Venetian hotel. Adelson has thus far refrained from weighing in on the Republican primary race and except for small contributions to the Cruz campaign, has kept his fortune out of the race. A decision by Adelson, who poured over $100 million into the last presidential race, could give Cruz a much needed boost as he seeks to challenge Trump’s standing as frontrunner.

“We are in close contact with the Adelsons,” said Muzin, referring to Adelson and his wife Miriam. “We have a great relationship with them.”

In Brooklyn and Vegas, Cruz Seeks To Grow His Jewish Base