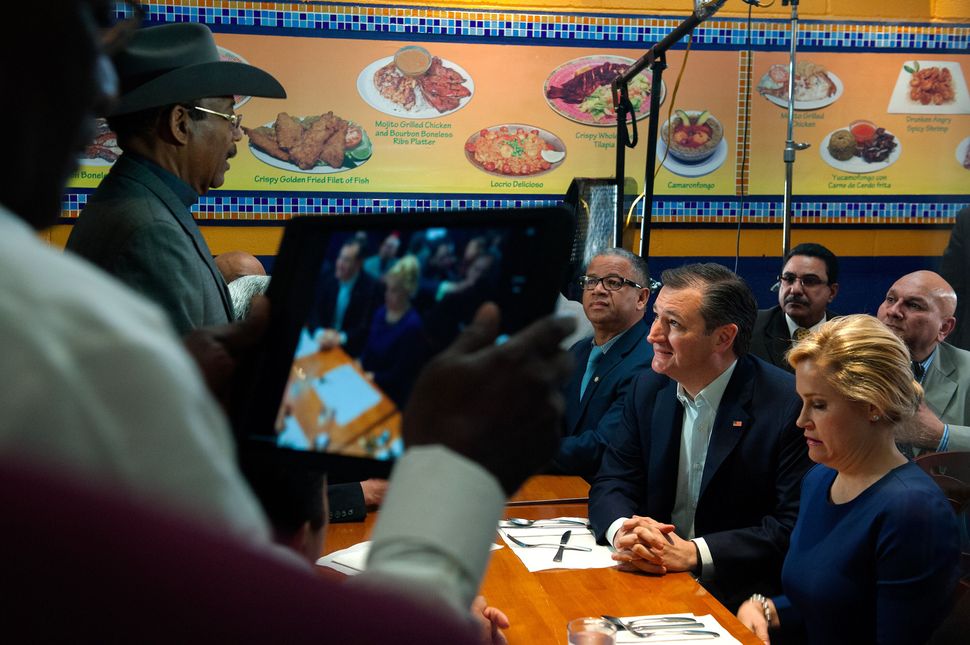 Ted Cruz sought to put a controversy over his off-the-cuff New York comments on “money and the media” behind him with a speech at the Republican Jewish Coalition on Saturday in Las Vegas.

Cruz opened his comments with a “Good Shabbos” blessing, moved on to a quick mention of the Jewish calendar month of Nisan that has just begun, and then to a flattering description of his RJC listeners as a “sophisticated political audience.”

Using the oldest trick in Republican Jewish politics, Cruz promised to move the U.S. Embassy in Israel to Jerusalem, winning an automatic roaring standing ovation from the crowd of top Jewish Republican donors and activists.

But in a clear departure from his previous speech in March at an American Israel Public Affairs Committee conference, Cruz chose to focus on internal GOP politics rather than on policy. He acknowledged the differences between him and many Jewish Republicans on social issues, family and immigration, and even noted that he was not their first choice to lead the party in the general elections. Cruz then sought to portray the grave danger he believes Republicans face if Donald Trump becomes their presidential nominee, and to convince the crowd of savvy political Jewish donors that he has a real chance of depriving Trump of the nomination.

“Can Cruz win?” he asked rhetorically, responding that he can, since Trump will not arrive to the nominating convention with the magic number of 1,237 delegated. “I believe the first ballot will be the highest vote total Donald Trump receives. And on a subsequent ballot, we’re gonna win the nomination and earn the majority,” he said.

Cruz’s speech was an effort to bounce back from an up-and-down initial push for the upcoming New York primary.

He might have expected that the “New York values” comment he made in Iowa in January will come back and bite him once the primary circus gets to the Empire State, but he may have underestimated the ferocity of the pushback.

Cruz, campaigning in New York in advance of the state’s April 19 primary, got bashed on every turn he made: byhecklers in the Bronx, byTrump and byconservative pundits. Even John Kasich, shed for a moment his Midwestern manners to deliver an attack on Cruz.

But Cruz, who spent Thursday evening baking matzo in Brooklyn, is also facing some serious backlash from those who could not help but interpret his comment on “New York values” that “focus around money and the media” as an invocation of anti-Semitic stereotypes.

“Let’s be honest. He said, ‘New York values are about money and they’re about the media,’” said CNN legal analyst Jeffrey Toobin on Thursday. “That’s an anti-Semitic trope from 100 years; it’s been around for a very long time. Everyone in the whole country understands what he was saying.”

On Fox News, commentator Geraldo Rivera called out Cruz for his “stinking anti-Semitic implications that I see in that whole New York values money and media coded message that he put out there.” Asked the next day to elaborate on his comment, Rivera added: “What do you need? A cartoon of someone with a big nose from another era?”

And at least part of the public agrees that that is exactly what Cruz was thinking of when he made the comment. On his website, radio and TV host Michael Smerconish asked his readers to vote on whether Cruz was speaking of “liberal values” or it was an “anti-Semitic trope.” Thirty percent voted for the latter.

Cruz, in an effort to deflect criticism, has been spending time on his stump speeches and in TV studios trying to reframe the “New York values” comment in a way that avoids the Jewish reference. “Everyone in New York and outside of New York knows exactly what I meant by that,” he said on CNN.

“And it is the liberal values of Democratic politicians who have been hammering the people of New York for decades,” he said. He mentioned several liberal New York politicians, including Andrew Cuomo, Anthony Weiner, Eliot Spitzer and Charles Rangel, as examples of those to whom he was directing his comments. Two of them are Jewish.

Cruz is facing an uphill battle in New York, and not only with its Jewish voters. A recent Monmouth University poll put him in third place, with only 17% of New York GOP voters saying they’d vote for him as the party’s presidential nominee. He trailed behind Trump (52%) and Kasich (25%).

But Cruz, speaking after his matzo baking photo-op, insisted that he’s doing just fine with the state’s Jewish votes.

“We’ve got tremendous support in the Jewish community, tremendous support especially in the Orthodox (Jewish) community,” Cruz told CNN. “I’ve been privileged to speak at synagogues all over the country. In particular, to focus on defending religious liberty, which has been a passion of mine my entire life, and focus on standing with Israel.”