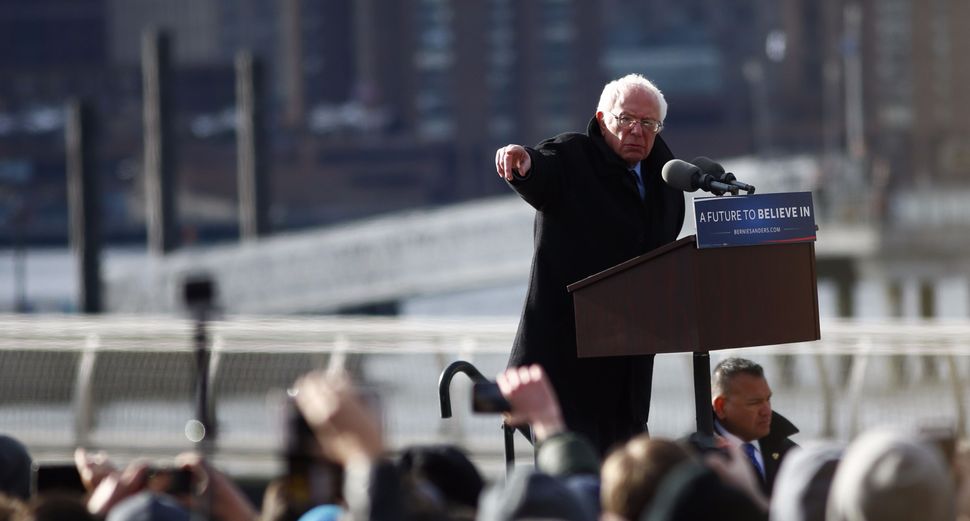 Democratic presidential hopeful Bernie Sanders decided to open his busy weekend in New York with a speech outside of the old apartment building that he called home during his first 18 years.

The street, off Kings Highway in Brooklyn, where the young Sanders played marbles with his friends is now home to ultra-Orthodox families, and Friday afternoon is busy with preparations for the Sabbath. Still, many residents of Sanders’ old street didn’t miss the opportunity for a close look at the man who may just be their next president.

The gathering was Sanders’ first public appearance since his controversial interview with the New York Daily News, and the criticism of its contents may have led his campaign to stress Sanders’ vision for the United States and call on the public not to become obsessed with minor issues. “He allows us to be idealists, as we want to be. He may be a dreamer, but his dreams are becoming reality,” said actor Mark Ruffalo as he introduced the candidate.

Sanders emerged from the apartment building where he grew up to the sound of the cheers of his supporters, among them the neighborhood’s ultra-Orthodox residents and neighborhood children. “Our job in this campaign, and in the future too, is to think big, not small, to think what we can accomplish as a people, not what we can’t accomplish … to end a campaign system that is corrupt, that allows billionaires to buy elections,” he said.

Many of the Brooklyn residents who attended the rally are well aware of the details of Sanders’ interview with the New York Daily News, when he mistakenly said that 10,000 innocent people were killed in Gaza by Israel during Operation Protective Edge. The declaration was criticized by Israeli politicians, including Yair Lapid (Yesh Atid) and Michael Oren (Kulanu). The Anti-Defamation League demanded that Sanders apologize, and a day before the rally in Brooklyn the Sanders campaign published an announcement that the senator was referring to the number of injured and not the number of dead.

But judging from conversations with supporters at Sanders’ rally, they don’t seem likely to abandon the Jewish senator because of his declarations, mainly because some of them welcome his criticism of Israel’s conduct during Operation Protective Edge.

“He may have been misinformed on the numbers, but the idea itself, of killing innocent civilians from Gaza, using that white stuff that they used, I find it distasteful,” says Peter Schneider, a 70-year-old Brooklyn resident.

“I happen to be Jewish and I believe Israel has the right to exist, but I don’t think that Israel has the right to oppress the Palestinian people the way they have been doing. And I firmly reject the notion that a person who criticizes Israel, criticizes Zionism, is anti-Semitic. I find it bizarre. I’m not anti-Semitic, I’m a Jew. And people can drum up anything they please, to catch any candidate on factual inaccuracies and then attribute a bad motive to them. I don’t think Bernie has bad motives.”

Some neighborhood residents watched the rally from the steps of their homes and did not join the colorful celebration by Sanders supporters. Several residents said that they had heard complaints in the neighborhood that Sanders is “auto-anti-Semitic” long before the most recent declaration.

David Rosenberg is one neighborhood resident who isn’t enthusiastic about Sanders.

“There is no such thing as a free lunch. I think Cruz is more down-to-earth, he has more experience. I believe that a lot of the people supporting Bernie Sanders are young kids, 18, 19, 20, in college. They have no experience, they haven’t paid for things in their lives and they don’t know what they need,” says Rosenberg.

“He is very critical of Israel. We, as Jewish people, are constantly being attacked. To say that we need to be very careful to try to avoid civilian casualties, which Israel is already doing, more than any country in the world, and say it’s not enough, and empathize with claims that 10,000 people have been killed when the number is around 2,000, most of them not civilians, Mr. Sanders, is obviously very extreme, quite frankly anti-Israel. I would never consider Bernie Sanders to be a friend of Israel. The Jewish community is not lightning up in his camp, except for young kids.”

Others say that they were hurt by the fact that Sanders inflated the figures for the Palestinians killed in Gaza, but in their opinion in any case there is no significant difference in the policy of the candidates on the subject of Israel.

Joel, a young Haredi who lives in the area and came to hear Sanders’ speech, believes that the former neighborhood resident is trying not to distance voters by demonstrating his Jewishness.

“I think he doesn’t want to promote his Jewishness on the campaign trail. And I think his comment about the 10,000 was completely inexcusable. But all in all, I’m not a big fan of the candidates trying to fight over who is better for Israel. Most of them are basically the same on this issue, which is good.”

His friend Baruch is also not excited by what Sanders said about the number of dead in Gaza. “I was disappointed on this issue, it isn’t true, it’s grossly exaggerated. And I think he apologized for it yesterday or today. So he said it – next. He’s not going to strip statehood from Israel nor recognize Jerusalem as the capital. It will be the status quo.

“I don’t like his tone, because I believe it doesn’t matter if hate comes from the rich to the poor or from the poor to the rich, I would prefer the message to be said in a more peaceful way. But I believe some of his policies might actually be good for America.”

For more stories, go to [Haaretz.com] or to subscribe to Haaretz, [click here] and use the following promotional code for Forward readers: FWD13.