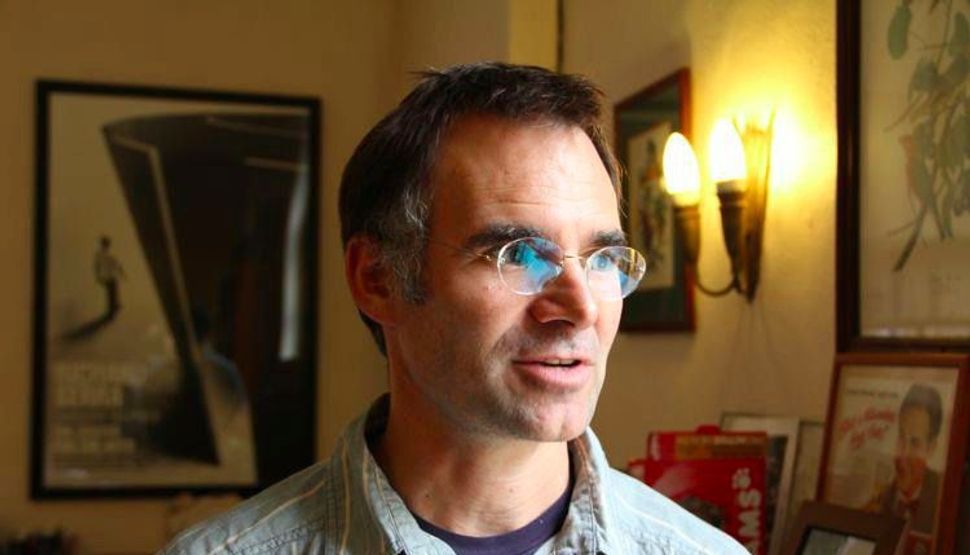 Turns out she was a last-minute substitute for Rabbi Andy Bachman, who was scheduled to participate in the Saturday-night Sanders campaign event at the First Unitarian Congregational Society in Brooklyn Heights but was unceremoniously uninvited shortly before it was to begin.

The tweets were mild by the current standards of political rhetoric. On Saturday morning Bachman, an ardent sports fan, retweeted a post by the Clinton campaign touting an endorsement by Basketball Hall of Famer and author Kareem Abdul-Jabbar, adding it is “a great endorsement by a wise man.” Just a day earlier Bachman had tweeted, “I’m officially sick of the primaries and haven’t even voted yet.”

And on Tuesday Bachman retweeted a link to an op-ed in Haaretz by Rabbi Eric Yoffie, a former president of the Union for Reform Judaism, endorsing Clinton for the Democratic nomination.

But on Saturday night he wrote: “I was booted off tonight’s interfaith panel with @BernieSanders‬ because of some “pro-@HillaryClinton‬” tweets. So much for being a loyal Dem.”

Bachman declined to speak with Haaretz about it, writing in an email, “I may blog about it.  Otherwise, just lay low and vote for Hillary on Tuesday.  Respectful dissent is a Jewish value, at least in Brooklyn.”

Rabbi Andy Bachman. ‘I was booted off tonight’s interfaith panel with @BernieSanders‬ because of some ‘pro-@HillaryClinton‬’ tweets. So much for being a loyal Dem.’Len Small Apparently it wasn’t what the Sanders campaign had in mind when it booked him for the panel. Sanders representatives did not immediately respond to inquiries by Haaretz. Luria, who like Bachman is a Reform rabbi, is currently known for her work with ImmerseNYC, an organization she founded in order to “reclaim and reframe” mikveh use for liberal Jews. She hopped on the subway and made it from her Park Slope home to the church in plenty of time, sitting in an office next to Sanders, who had recently flown in from the Vatican, as each of them prepared for the event. Also speaking at the multi-faith social justice roundtable were Cornel West, a professor of philosophy and Christian practice at New York’s Union Theological Seminary, and Linda Sarsour, the executive director of the Arab American Association of New York, who is of Palestinian descent.

Sarsour was made available to members of the media a Sanders surrogate and interviewed by Haaretz immediately following the Democratic candidates’ televised debate on Thursday night.

Speaking to Haaretz after the roundtable, Luria said it was focused on “the theological, moral, spiritual values undergirding what Sanders calls the political revolution.”

Unlike at Thursday night’s debate, Israel-Palestine was not discussed, said Luria, except for a mention by West that “a Palestinian baby has the same dignity as a Jewish baby.” West was riffing off remarks Sanders made at the debate, in which he said, “In the long run if we are ever going to bring peace to that region which has seen so much hatred and so much war, we are going to have to treat the Palestinian people with respect and dignity.” Luria told Haaretz that “there was a lot of cheering” in the racially diverse audience at the church, and that “there were a lot of riled-up people.”

Rev. Ana Levy-Lyons, senior minister at First Unitarian Congregational Society, told Haaretz that the Sanders campaign rented the church for the event, and that “the crowd was ebullient and warm.”

About 500 people filled the sanctuary “roaring with applause and leaping to their feet every few minutes in response to the speakers’ words. All the speakers were charismatic and the neo-Gothic sanctuary was a dramatic backdrop to the whole event.”

What really got people excited was when Sanders talked about his positions not being radical, said Luria.

“Bernie said what is radical is that there are Republican senators who deny climate change. It was his talking points but it was exciting for the crowd. What’s radical is that we’ve been quiet for so long.”