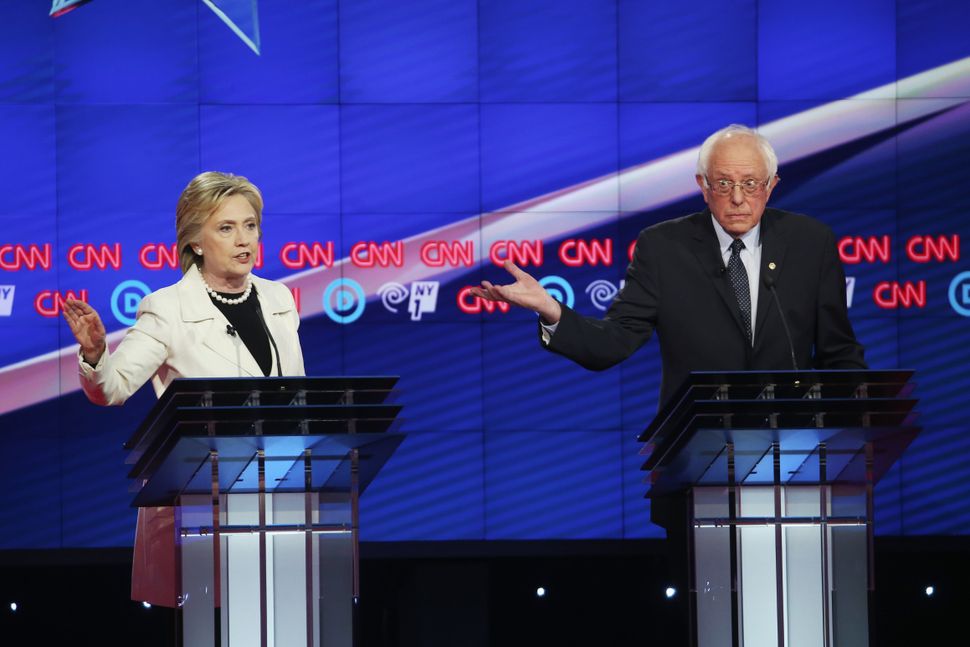 Washington – The contentious exchange over Israel between Hillary Clinton and Bernie Sanders during their April 14 Brooklyn debate may have caused some in the Democratic Party to cringe, but for J Street, the dovish pro-Israel lobby, it was a cause for celebration.

For the left-leaning lobby, Sanders’ choice to criticize Israel’s actions during the 2014 Gaza war, and Clinton’s statement that she would pressure Israel into peace, affirms their long-held vision of a more spacious political debate on Israel, one in which Israel is not beyond criticism.

“Both candidates are making statements incredibly aligned with J Street,“ said J Street president Jeremy Ben-Ami, who called the debate a cause for “rejoicing” in a mass e-mail to group supporters.

This puts J Street in a good position — and a tricky one. Sanders’s willingness to challenge the decades-old paradigm on Israel endears him to J Street, but his candidacy also highlights a divide in the group. Its student wing has embraced Sanders, but its board and important donors are Clinton supporters.

“You don’t see many Bernie voters here,” said Victor Kovner, a member of J Street’s board of directors, as he pointed to the full room of activists gathered April 17 in Washington. Kovner, a supporter and major donor of Clinton, proudly pointed to his Hillary Clinton lapel pin, but acknowledged that earlier that day, when he stopped by the conference of the group’s student organization, J Street U, his was “the only Hillary pin in the room.”

Kovner did not try to hide his joy at seeing Sanders push the boundaries of acceptable discourse for Israel supporters, but he made clear he does not believe Sanders is the candidate who can deliver on the issue. “He will get killed in the polls,” Kovner said. “In my view, all the things we are fighting to achieve can be reached by the nomination and the election of Hillary Clinton.”

The challenge now facing J Street is how to capitalize on the debate while staying above the fray and not alienating any of its constituencies.

While donors and heavy hitters on the J Street board may have long ties with Clinton and a strong belief in her ability to renew the peace process if elected president, the mood changes when J Street looks to its younger activists. There, student and young backers of the lobby have a much more diverse view of the Democratic race and many, as indicated in the reaction to the ouster of Simone Zimmerman, a former J Street U leader who got suspended from the Sanders campaign after her harsh comments on Israeli prime minister Benjamin Netanyahu were made public.

While many at J Street credit Sanders with taking the debate to their own corner and raising issues never discussed before in a presidential campaign, some in the group question whether he could actually deliver a tough stance toward Netanyahu and Israel — and claim that Clinton could succeed where maybe Sanders couldn’t.

The group’s chairman of the board, Morton Halperin, recently signed an open letter of former administration officials expressing their concerns about “Sanders continued disinterest in foreign policy.”

A look backwards could put even J Street’s Sanders fans more at ease about Clinton, said Neera Tanden, president and CEO of the Center for American Progress and a close confidant of Clinton’s.

“When you look at the 1990’s, the first president Clinton,” she said during a J Street panel discussion, “while supporting Israel, he did create a lot of pressure on Israeli government.” The suggestion was clear – Hillary Clinton too could push Netanyahu to action, despite the fact that Sanders has claimed this mantle in the last debate.

J Street was born just as Barack Obama took over the White House and has since positioned itself as a group willing to give the administration, as well as members of Congress and candidates, the backing they need in order to take positions on Israel that may be unpopular among the more established American Israel Public Affairs Committee. J Street, through its political action committee, endorsed candidates for the House and Senate willing to voice liberal views on the Israeli-Palestinian conflict, and recently pushed back forcefully against AIPAC’s massive drive to defeat President Obama’s nuclear deal with Iran.

Now, the administration is returning the favor with a series of public gestures meant to send a clear signal to supporters of the lobby, and to AIPAC. President Obama invited a group of J Street student leaders to a meeting in the Oval Office on April 15. Then he sent Vice President Joe Biden and Secretary of State John Kerry to deliver remarks at the group’s April 18 gala dinner. AIPAC, by contrast, got a detailed, an at times critical, speech by Biden, but no other senior administration officials.

While Obama did not endorse any candidate in the Democratic race, his ties with Clinton date back eight years, when he first ran against her for the party’s presidential nomination and later entrusted her with his top diplomatic position as secretary of state. Sanders, on the other hand, is not known for his close ties with Obama.

At J Street, the sympathy toward Clinton stems not only from the group’s close ties with Obama, but also from the feeling that Sanders, despite the helpful role he played in raising the Israeli-Palestinian issue, has gone too far, at least once.

Sanders has repeatedly accused Israel of using “disproportionate” force in its response to rockets fired from Gaza in 2014. In speeches, debates and interviews, Sanders made a point of claiming that while he was willing to call out Israel on its massive bombardment of Gaza, Clinton would not go so far.

But neither would J Street.

“We did not use that word and that’s not the way we interpreted it at the time,” said Ben-Ami. “We’re not interested in re-litigating events that happened in 2014.”