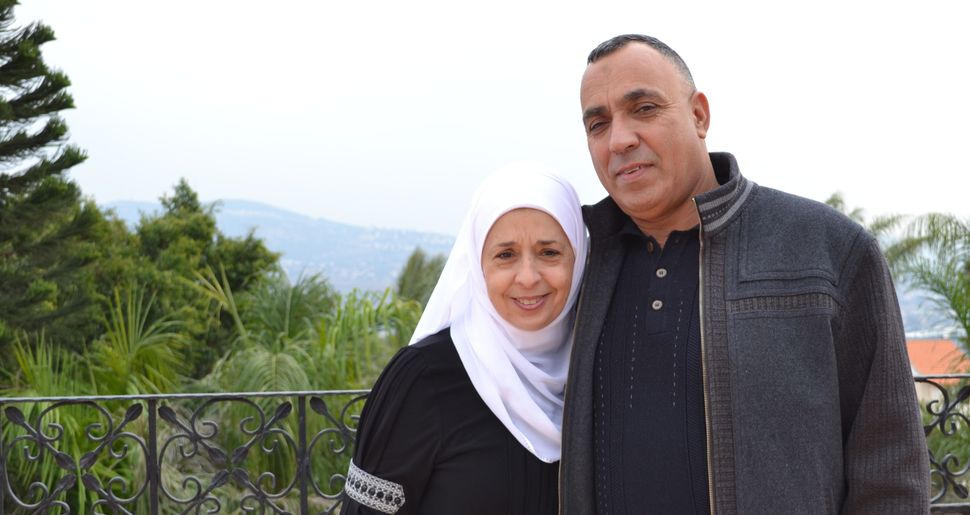 Iman and Riad Sharary won the right to build in Afula but a Nazareth judge invalidated their bid this week. Image by Naomi Zeveloff

Dozens of Arab families who were planning to build homes in the Jewish city of Afula have lost their leases to the land after an Israeli judge said that they illegally coordinated their bids.

Last November, hundreds of Jewish residents of Afula protested the prospect of Arab neighbors after Arab families won tenders to build 47 houses in the northern Israeli city. Demonstrators demanded Afula mayor Yitzhak Meron revoke the tenders, calling him a “traitor” and a “terrorist.”

A group of Jewish families who bid and lost tenders for the land first complained to the Israel Land Authority, contending that the Arab bidders had been in coordination with one another. The ILA rejected the complaint saying that it was natural for bidders with personal connections to exchange information, said Haaretz.

The Jewish families then took their petition to a Nazareth court.

On Sunday April 24, a Nazareth judge ruled in favor of the Jewish families. He said that the Arab families had organized their bids so they weren’t competing against each other and coordinated prices in a manner that “upset the market’s natural balance,” according to Israel’s Ma’ariv newspaper.

Their coordination “seriously harmed the principle of equality, a principle that is at the foundation of tender law,” the judge said.

Itai Cohen, a representative of the Jewish families told Maariv: “This is a day of celebration for Afula, and particularly for those who were concerned about the the fate of the city’s Jewish makeup.”

According to Abdullah Zoabi, a lawyer representing four Arab families, the judge did not rule that the Arab families were disqualified from trying to bid on the land again. Abdullah said he was waiting to learn whether the state would intervene and limit the bidding to Afula’s Jewish residents.

Arab lawmakers are calling foul on the Nazareth court, saying the decision was driven by racism. Knesset Member Basel Ghattas told Maariv that the court’s decision reflected the “spirit of racism that has been sweeping the country. These state institutions have always used planning and construction laws to deprive Arabs of their lands and rights, and the Nazareth District Court’s decision gave a seal of approval to a petition that was lodged exclusively out of racist motives.”

The Nazareth judge invalidated the entire group of tenders, saying that the entire bidding process was “defective” and there was no way to exempt those who did not coordinate. Zoabi’s four clients were found not to have coordinated, but they lost their right to build anyway. He said he that the four families will appeal the decision to the Israeli High Court.

Iman Sharary told the Forward she was extremely disappointed to learn that the Nazareth judge disqualified her family building in Afula. She wanted to lease the land in Afula for her sons and their families, since land is at a premium in Yafia, the village where they grew up. She believes that the judge’s decision was racially motivated.

She said that she and her husband, Riad Sharary, did not coordinate their bid and that she had no idea who the other Arab bidders were. Now, she is looking for a new place for her sons to settle down.