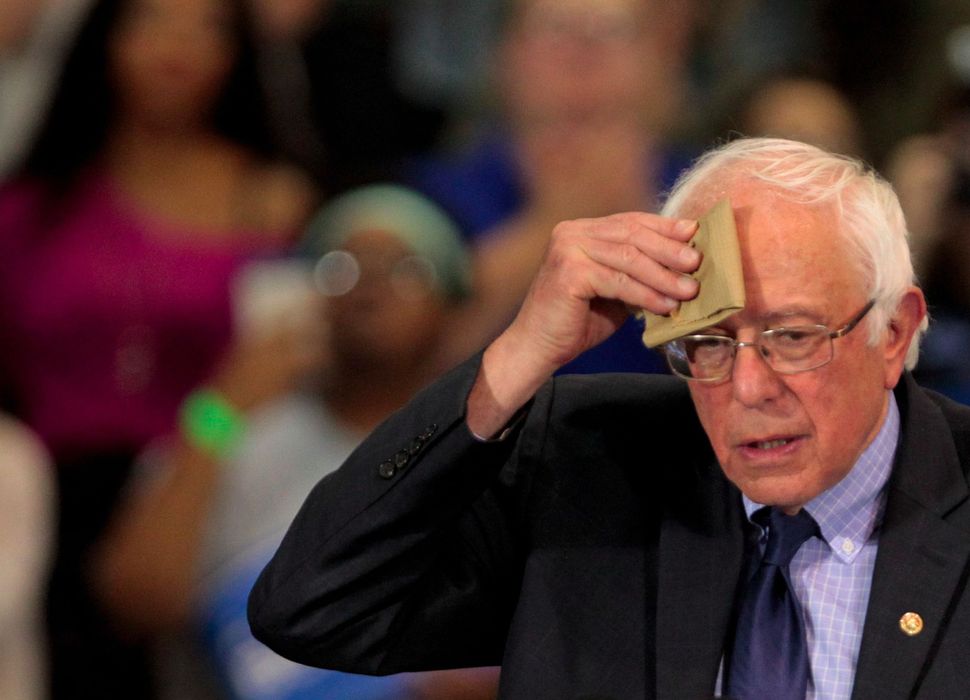 Tuesday’s primary races in five states left Bernie Sanders once again facing the question he’s been avoiding for weeks: What next?

Hillary Clinton, with victories in Pennsylvania, Maryland, Connecticut and Delaware, has now passed the 90% mark on her way to winning a majority of delegates needed to secure the Democratic nomination. Sanders’ path to victory is all but mathematically impossible.

The Sanders campaign has acknowledged even before polls closed on Tuesday that it is time for “reassessment” but made clear the Jewish senator from Vermont is not considering dropping out of the race before the Democratic nominating convention in July.

In a concession speech, Sanders vowed to stay in the race until “every vote is cast.”

That may be so, but the simple truth is there aren’t that many primaries left.

So what are the possible strategies for Sanders? Here are 5 steps to look for in the upcoming days and weeks:

Sanders’ 1321 delegates will not get him the nomination, and while in an imaginary world he could clinch the nomination by winning pretty much each and every delegate in the upcoming races, the Democratic primaries take place in the real world in which last minute landslide victories are hard to come by.

The first step to look out for from the Sanders camp is coming to terms with this reality, and there are already signs this is happening on the ground. “If we are sitting here and there’s no sort of mathematical way to do it, we will be upfront about that,” Sander’s senior adviser Tad Devine told the New York Times before Tuesday’s round of primaries. Now that the votes are in, this might be an opportune moment to make this determination.

Don’t Listen to the Donald

In recent days, including in his victory speech Tuesday night, Republican frontrunner Donald Trump had taken an unusual interest in the political fate of his fellow outsider Bernie Sanders. Trump seemed to find a sense of kinship with Sanders, who, just like Trump, “has been treated terribly” by his part. Trump has a piece of advice for Sanders: “He should show them, and run as an Independent!”

This move would be good news for Trump, who’d have an easier time running against Hillary Clinton if the Democratic vote is split, but Sanders has made it quite clear he does not plan to heed Trump’s advice. Sanders, who spent most of his political life as an independent, stated he will not only back any Democratic nominee, but also campaign for their victory in the November elections.

This is probably what most of Sanders’ supporters would like to see – translating a political campaign, even a failed one, into a grassroots organization that will shape the future of Democratic politics and harnessing the power of the masses who felt the Bern to a long lasting force capable of shaping policies.

Some of Sanders’ Jewish supporters have suggested ways of carrying out this vision. Rabbi Lerner, editor of the progressive Tikkun magazine, called on Sanders to “create a Tea Party off the left within the Democratic Party.” The idea is to model the success of the Tea Party movement in shifting the GOP to the right by acting from within. Lerner even has a name in mind: the Justice and Generosity movement.

Another Jewish backer, Charles Lenchner, co-founder of People for Bernie, has been working to organize “The People’s Summit,” a gathering of Sanders supporters that will take place after the Democratic convention.

In order to play a role in future Democratic politics, Sanders will have to prove in the upcoming months that he can bring hundreds of thousands of supporters out not only to his own rallies, but also to the polling stations on Election Day. And that he can make sure they vote for the Democratic nominee.

This is not a simple task for an outsider candidate who has based much of his success on independent voters who had never voted Democratic before and would probably never consider participating in the primary elections if Sanders was not on the ballot.

Sanders has already toned down his attacks against Clinton, a crucial step in shaping a post-primary message that can convince supporters that the Democratic Party is now their political home.

Run the Table — or at Least Run

The Sanders campaign has been sending a mixed message in recent days: moving toward acknowledgement that winning the nomination is no longer possible, while insisting that Sanders will run in all remaining states.

Now, they just have to explain to voters, and to Democratic officials, how this makes sense.

And it does, if Sanders’ tweaks his message and rebrands his campaign as a race for a cause, rather than for a prize. Sanders will have to explain to primary voters that even though he may not be the next presidential nominee, he can still use their vote to make a case for increasing the progressive impact within the Democratic Party.