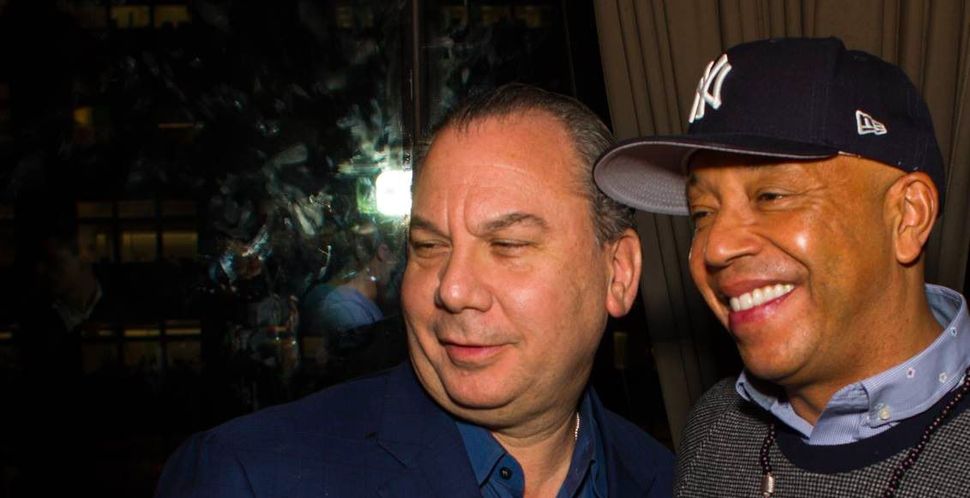 Schneier, who was expelled from Modern Orthodoxy’s largest rabbinical association last year over infidelity allegations and is now leaving the Long Island synagogue he started, is the FFEU’s president and founder.

Matt Dorf and Steve Rabinowitz represented FFEU from 2008 through 2011. The group, which advocates for better relations between blacks, Jews, and Muslims, stopped paying Rabinowitz and Dorf in 2011. FFEU has owed the duo $91,951.90 since then, according to the two men, some of it on invoices dating back to 2009.

Dorf and Rabinowitz said that Schneier has repeatedly acknowledged the debt and told them he intends to pay it, but that the money has never come through.

In a statement to the Forward, FFEU executive director Chris Sacarabany said that the claim is “in dispute” and under discussion by attorneys. Schneier himself did not respond to a request for comment, nor did FFEU’s attorney, Robert Cyruli.

“We look forward to this matter being resolved,” Sacarabany wrote.

FFEU’s chairman is hip-hop entrepreneur Russell Simmons, who has sat on the group’s board since 2002.

The debt raises questions about the FFEU’s balance sheet. The group reported in its latest tax returns that it had liabilities of $247,000 and assets of just $30,000. FFEU reported in 2013 that Schneier had loaned it $30,000 to cover its operating deficit in 2012. He was repaid shortly thereafter.

Schneier, whose father is the rabbi of the prominent Park East Synagogue in Manhattan, has been tabloid fodder for years. He has been married five times. He allegedly cheated on his fourth wife with his current wife, who was at the time a member of his congregation, the Hampton Synagogue. That alleged affair led to him being kicked out of the Rabbinical Council of America.

The New York Post reported on April 24 that Schneier was stepping down as the Hampton Synagogue’s rabbi. In an April 25 email to the congregation, the Hampton Synagogue’s president, Carol Levin, defended Schneier’s comportment. “Unlike other sanctimonious leaders who want us to believe they are spotless, Rabbi Schneier lived his life — the good and not good — before us in plain view,” she wrote.

The presidency of FFEU, which Schneier founded in 1989, will be his only public role after his departure from Hampton Synagogue. Yet now that organization appears to be under some strain.

Dorf and Rabinowitz worked for Schneier through their firm Rabinowitz/Dorf, which itself split acrimoniously in 2013. Rabinowitz/Dorf handled public relations for many of the Jewish community’s largest charities. Dorf said that the firm provided media strategy, messaging and publicity for a number of FFEU efforts, including a trip that brought chief rabbis and leading imams from European capitals to tour the U.S. together.

“Steve and I had this business where we worked for people and causes we believed in,” Dorf said. “This was really a cause that was near and dear.”

FFEU did send Rabinowitz/Dorf for some money for its work, including one large $60,000 payment in December 2008 and another $25,000 payment in December 2009, according to customer account sheets provided by Rabinowitz. Yet the charity continued to accrue debt to Rabinowitz/Dorf through 2010 and 2011, with Schneier telling the two public relations executives that he was waiting on large payments from a few donors.

“Schneier used to talk about how much of his funding came in large chunks,” said Rabinowitz, now president of Bluelight Strategies.

After they finally stopped representing FFEU at the end of 2011, Rabinowitz and Dorf continued asking Schneier for their money. They sent personal emails to Schneier, asked a mutual friend to intercede, and, a year ago, contacted an attorney, who sent a demand letter.

They have not received a dime from Schneier or the FFEU since July 2011.

Meanwhile, the FFEU has raised between $760,000 and $926,000 each year between 2011 and 2013. Yet the group spends heavily on salaries, fundraising and travel. Schneier earned $257,000 in 2013, placing his compensation among the top fifty earned by Jewish not-for-profit executives surveyed in the Forward’s 2014 salary survey.

Since Rabinowitz/Dorf split in 2013, the two men have hardly spoken. When they talk now, it’s mostly about the FFEU debt. In mid-April, Rabinowitz and Dorf reunited to confront Schneier at the National Press Club in Washington, D.C., where the rabbi was slated to appear at an event Dorf was organizing for a client.

When the duo approached Schneier, he stepped away, saying he needed to make a phone call. He kept them waiting for a long while. As they waited, friends and former clients who spotted Rabinowitz and Dorf, knowing that the two are no longer close, joked about them standing together.

When they finally spoke to Schneier, he told them that he would have his lawyer talk to their lawyer. Rabinowitz said that that had not yet happened.

Rabinowitz said that the former partners plan to turn the matter over for professional aggressive collection within the next few weeks. He said that he expects to file a civil lawsuit against Schneier and the charity.

“Rabbi Schneier has said time and time again that he acknowledges this debt and he will make good on it,” Dorf said. “We expect him to.”