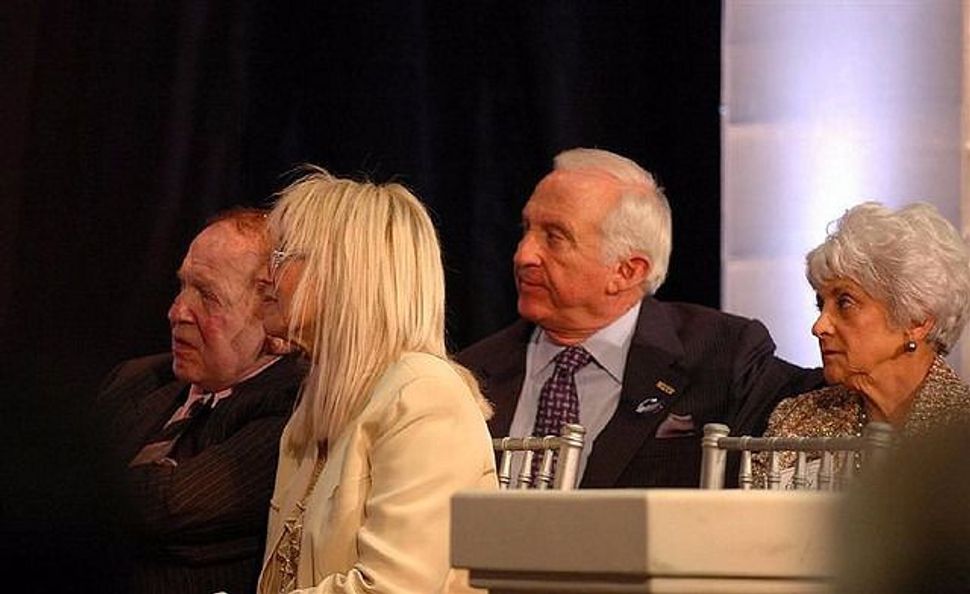 A Jewish developer and associate of casino magnate Sheldon Adelson is on an anti-marijuana crusade in Florida.

GOP fundraiser Mel Sembler has promised to raise $10 million to defeat a medical marijuana initiative that will be on this fall’s ballot in Florida, the Miami New Times reported.

Critics who support the initiative fired back on Wednesday calling Sembler “Mel the Moocher” — a reference to the fact that Sembler took millions of Sheldon’s money during another anti-marijuana campaign two years ago.

“It’s easy to talk a big game when you’re spending your rich Uncle Shelly’s money, I guess,” John Morgan, the attorney funding the medical marijuana push wrote. “If there is one thing in the world I can’t stand, it’s bullies. I’ve made my living beating up bullies. Mel the Moocher is a bully. “

Sembler is the founder of Drug Free America, a group that has backed anti-medical marijuana initiatives in other states.

It’s unclear whether Adelson will be contributing to Sembler’s latest $10 million promise, but in 2014, Adelson did give $2.5 million to Drug Free America to fight the same initiative in Florida, Vice reported. In 2014, Sembler’s group successfully raised $7.5 million to battle the initiative, which still earned a 58 percent approval.

“We’re trying to save lives and people’s brains,” Sembler said of his anti-marijuana campaign last week. “It’s not a medicine.”

The fight against the “mainstreaming” of medical marijuana has been called a “personal passion” of Adelson’s. But his medical research organization, the Dr. Miriam and Sheldon G. Adelson Medical Research Foundation, also produced a study showing that medical marijuana has the potential to help those suffering from multiple sclerosis.

And at the same time, many Jews in America and Israel are part of pro-marijuana initiatives. For example, one of the East Coast’s first legal medical marijuana dispensaries was run by a Jewish couple in Washington, D.C. The Israeli Raphael Mechoulam is a father of modern medical marijuana. Israel even hosts an annual conference for cannabis tech companies, called CanaTech.

What’s more: Pot is kosher. Even during Passover, an Orthodox Israeli rabbi just declared. In a widely-watched YouTube video, a group of prominent Israeli rabbis recently offered their own blessing.