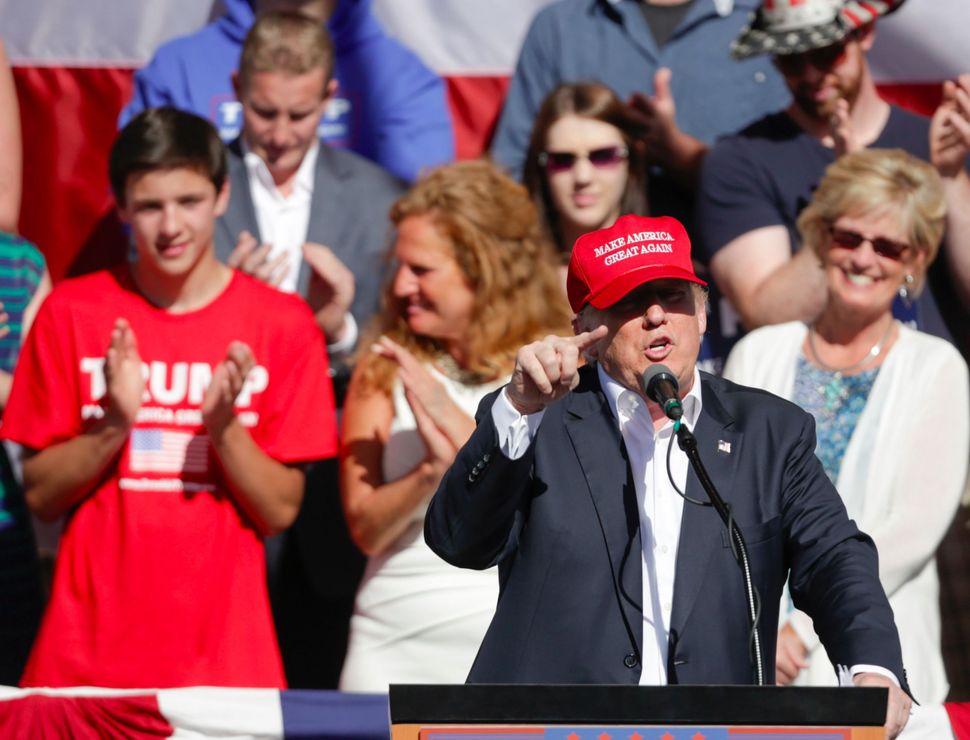 WASHINGTON — Donald Trump’s popularity is rooted in his outsider status, and that’s left Jewish and pro-Israel groups a bit stumped.

After all, it’s standard operating procedure for any advocacy organization come election season: Forge relationships with candidates for office from both parties in order to guarantee access and influence regardless of who wins.

Jewish and pro-Israel groups have a long tradition of networking from the grassroots to the highest level, but they have few channels to The Donald. The Anti-Defamation League, concerned about Trump’s white supremacist following, has not been able to reach him.

“You always want to be one phone call away from the candidate, so when the day comes and you need something, you’ll have someone to answer your call,” said Dan Arbell, a former deputy chief of mission at Israel’s embassy in Washington who was involved in similar efforts in the past. “With a candidate like Trump, it’s more difficult, because he has less of an organized campaign,” he added, noting that while Hillary Clinton’s campaign has had a Middle East team in place for months, Trump lacks such an infrastructure.

“It’s harder to identify, with him, who are the people surrounding the candidate or who will potentially be part of a future administration,” Arbell added.

True, Trump boasts a “Tree of Life” plaque from Jewish National Fund, and likes to mention that he was the grand marshal of the Fifth Avenue Celebrate Israel Parade in 2004.

And he has a Jewish son-in-law, Jared Kushner, real estate developer and owner of the New York Observer newspaper. Kushner has served as Trump’s unofficial liaison to the Jewish community at key moments.

Kushner sat down with Ron Dermer, Israel’s ambassador to the United States, before Trump spoke in March at the annual policy conference of the American Israel Public Affairs Committee, the largest pro-Israel lobby in the United States. What Dermer told Kushner presumably helped Trump shape his narrative on Israel as presented in the speech.

The celebrity rabbi Shmuley Boteach also decided to embrace Trump after speaking to Kushner, whom, Boteach said, is a friend and “rock solid” on Israel.

At AIPAC, the audience received Trump’s address warmly, but the leadership publicly rejected it, taking both Trump and his listeners to task for their disrespectful attitude toward President Obama.

In the months since, AIPAC has yet to forge deep ties to the candidate, although at least two the aides running his convention operation have worked there. Trump’s deputy campaign manager, Michael Glassner, who was recently put in charge of planning for the Republican nominating convention, worked as a regional director for AIPAC in the past. Brian Jack, who until recently was a political analyst at AIPAC, now manages Trump’s delegate efforts.

A Jewish official with close ties to AIPAC said the lobby is in touch with Trump but does not have an extensive network of ties with his campaign.

“It’s a very different situation compared to Hillary,” said the official, who asked not to be named because he is not authorized to speak on behalf of his organization. Clinton’s Middle East advisers and campaign managers, he explained, have been “on everyone’s contact list for years.”

“We encourage all candidates for federal office to share their positions on strengthening the U.S.-Israel relationship,” AIPAC spokesman Marshall Wittmann said in a statement provided to the Forward.

The American Jewish Committee hasn’t met with him yet, either.

“AJC always seeks to meet with the Democratic and Republican candidates for U.S. president to discuss our priority issues and concerns,” CEO David Harris said in a statement. “In that spirit, and having already met with some of his aides, we would welcome the chance to sit down with Donald Trump.”

And while Trump did disavow the comments of former Ku Klux Klan leader David Duke when he blamed Jews for obstructing Trump’s efforts to “make America great again,” the candidate did not respond to previous requests by the ADL to distance himself from such white supremacist supporters.

“I think the bottom line, is we haven’t spoken with him,” said ADL’s national director and CEO, Jonathan Greenblatt.

For advice on Israel, Trump relies on long-standing associates who themselves have personal connections to the Jewish state — not on credentialed experts who might be known to the Jewish communal world.

Friedman doesn’t see Trump hiring his Middle East team from the well-known pool of former administration hands and scholars, as Clinton did, when the time does come for him to roll out a more detailed platform on the region.

“It’s probably time for a fresh look,” Friedman said, pointing to a former Obama aide, Dennis Ross, as an example of an expert who has tremendous experience, but “in all the years that he was involved, Israel didn’t get any safer.”

Greenblatt visits Israel frequently and studied at a yeshiva there. Most of his knowledge of the country comes from email alerts and newsletters, he said. Friedman, who heads a U.S. charity that supports the Jewish West Bank settlement of Bet El, told the Forward he is not affiliated with any Jewish organization. “I’m not a big joiner,” he said.

Friedman has known Trump for more than 15 years, and has held numerous discussions with the New York real estate billionaire about Israel. “His heart is in the right place,” Friedman said of Trump. When asked if his advice influenced the candidate’s views on Israel, Friedman replied, “I think so, I hope so and I believe so.”

Friedman doesn’t think now is the time to pursue a two-state solution — a mainstay of U.S. policy for decades — as a means to resolve the Israeli-Palestinian conflict.

“I don’t think that a two-state solution is a productive way for people to be spending their time in the short term,” Friedman said, adding that creating “false expectations,” as was done, in his view, by Clinton and Secretary of State John Kerry, can lead to increased violence.

“My advice to Mr. Trump would be, take much smaller steps and try to lay the groundwork for peace.” he said. Friedman said he does not yet know if Trump agrees with this approach. He does believe, however, that Trump shares his view that Jewish settlements in the West Bank are important for Israel’s security.

“What I like about Mr. Trump is that he is not bogged down with policy,” Friedman added. “He follows the principle of Israel being a friend of the United States.”

But these dynamics can easily change once Trump finalizes his foreign policy team and articulates his Middle East platform.

According to one press report, Trump may even be considering the ultimate political gesture a candidate can make to the pro-Israel community – a post-convention trip to Israel, just like Mitt Romney took in 2012 and Barack Obama in 2008.

“I’m by no means Trump’s best Israeli friend, but I had a chance to get an insight into who he is,” said Jonny Daniels, who is the founder of an Israeli not-for-profit organization and maintains regular ties with Trump, in a May 8 interview.

Daniels heads From the Depths, an organization working to preserve Holocaust-era Jewish graves and memorials in Eastern Europe. He was the brains behind the Trump video endorsement of Israeli Prime Minister Benjamin Netanyahu before his 2013 re-election campaign, and has arranged a meeting between Trump and Danny Danon, a Knesset member for the Likud who now serves as Israel’s ambassador to the United Nations.

Trump, he added, impressed him with the “in-depth nature of his questions that only a person who is remarkably well-read and knowledgeable” could possess. The candidate’s affinity for Israel, Daniels observed, “goes deeper than we think.”