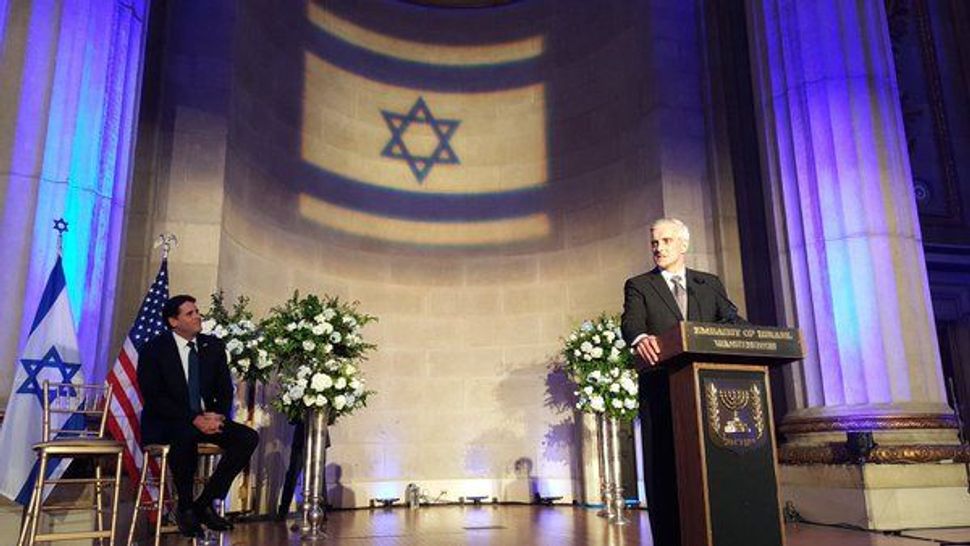 White House Chief of Staff Denis McDonough speaks, as Israeli ambassador to Washington Ron Dermer looks on at the Israeli embassy’s Independence Day reception in Washington, D.C., on May 12 2016. Image by Twitter/ Embassy of Israel

After having a terrible, horrible, no good, very bad year, top representatives of Israel and the United States found themselves on the same stage Thursday night at the Israeli Embassy , celebrating the Jewish state’s 68th birthday.

Ron Dermer, the Israeli ambassador who orchestrated prime minister Benjamin Netanyahu’s speech to Congress last year, which was aimed at derailing the administration’s nuclear deal with Iran, and Denis McDonough, who was President Obama’s point man for getting the deal approved, did their best to signal there’s no bad blood between them.

“I want to use this Independence Day, the final one of President Obama’s tenure, to once again express Israel’s gratitude for the many concrete ways President Obama has supported Israel during his presidency,” Dermer read from his notes, carefully.

McDonough also went the extra mile to reassure the audience that relations are back on track. He threw in a Hebrew “erev tov” (good evening) at the opening of his speech, struggled to pronounce “yom haatzmaut”(Independence day) and promised the crowd of several hundred Israeli officials, foreign diplomats and members of Congress, that President Obama feels Israel “it in his kishkes,” his gut.

“The United States and Israel are in many ways a family and like any big, boisterous family, Americans and Israelis disagree at times,” McDonough said, reminding listeners that as the 9th of 11 children in his own family he understands how tough family arguments can get. “But at the end of the day, we also care for each other, we look out for each other and we protect each other.”

These were not just empty niceties coming from two seasoned officials trained at the art of putting a positive spin even on the worst of situations. Since the passage and implementation of the Iranian nuclear deal, and despite the continuous friction between Netanyahu and Obama, the United States and Israel have moved to bring relations back to their normal track.

Obama was the first sitting American president to visit Israel’s embassy in January for a ceremony honoring U.S. citizens who save Jews in the Holocaust; Vice President Biden took a farewell trip to Israel, and Dermer, despite all hard feelings, is welcomed by administration officials for business-as-usual talks and meetings.

At the Independence Day reception, held in the Andrew W. Mellon Auditorium next to the National Mall, attendants from both sides of the political aisle demonstrated how at least on Capitol Hill, Israel remained a bipartisan issue. Democratic members of Congress mixed with the Republicans in the crowd, sending a clear message that for them, the battle over the Iran nuclear deal is yesterday’s news.

Dominating the conversations in the long lines snaking in front of the buffet tables and the kosher wine bars, was of course a much more immediate political concern: the Donald.

Trump, though in Washington Thursday to meet with GOP leaders, did not stop by at the Israeli reception. But he was on the mind of many in the ballroom. One Democratic operative tried to speculate how many of Jewish American voters in the audience will choose Trump come November. Another attempted to make sense of Trump’s promise to visit Israel “very soon,” a pledge Israeli officials said they’ve learned about only from the media.