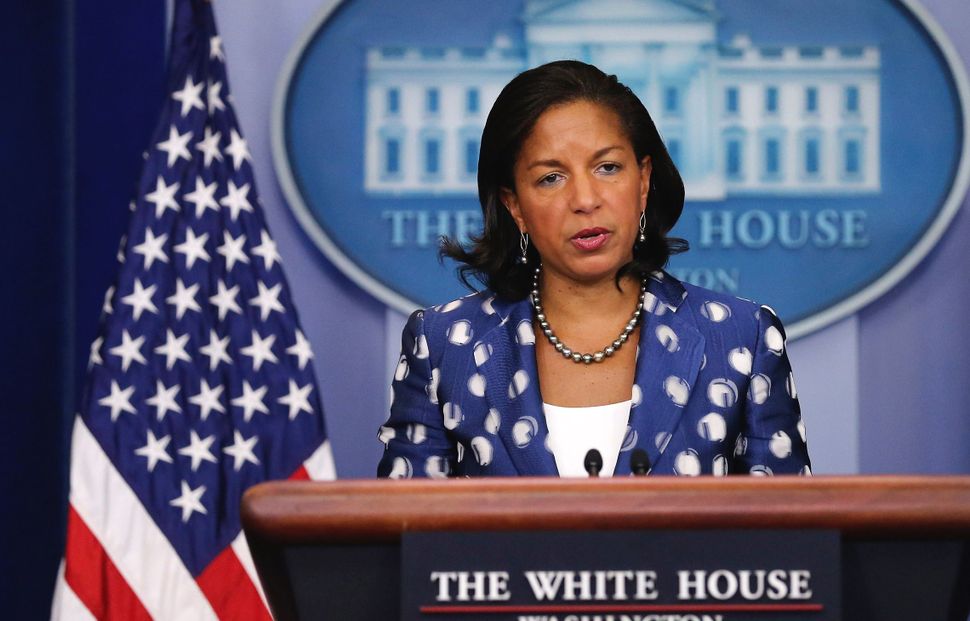 Just days after France hosted senior diplomats from the around the world to work on organizing a peace conference on the Israeli-Palestinian conflict, President Obama’s national security adviser, Susan Rice, pushed back against the notion that international pressure could supplant direct negotiations for a two-state solution.

In an exclusive interview with the Forward on Monday, June 6, Rice warned that conditions in Israel and the West Bank were deteriorating, which she blamed on actions by both sides. But, sitting in her office in the White House, she resisted characterizing Secretary of State John Kerry’s presence in Paris as an endorsement of any international effort, implying that Kerry was there more as a protective move.

“Secretary Kerry participated because we are very much of the view that this very delicate issue has to be handled effectively and we can’t see efforts that might, in fact, complicate the situation on the ground be allowed to generate distraction — or worse, renewed or intensified frictions,” Rice said.

So he was there representing our enduring view that we need a two-state solution. It’s overdue. Circumstances on the ground are not evolving in a constructive direction, and the parties ought to address this issue and resolve it through direct negotiation.

The interview was the first that Rice has granted one-on-one with a member of the Jewish media since becoming national security adviser in 2013.

While Rice ruled out support for a global peace initiative, she offered unsparing and unusual criticism of both Israeli and Palestinian behavior.

“This has come to a rather higher level of intensity in recent months, and that’s of great concern,” she said. “We’ve also repeatedly expressed concern with the continued and accelerated settlement activity, which administrations of both parties for over 40 years have expressed grave concern about.”

Rice spoke in the blunt terms that marked more than four years as ambassador to the United Nations during Obama’s first term, and the three years she’s been his national security adviser, with an office in the West Wing just a corridor away from his.

As Obama’s second term winds down, there’s been renewed speculation that he will launch his own initiative or support a U.N. Security Council resolution to establish hoped-for parameters around any future agreement. Several hundred members of Congress, Democrat and Republican, recently signed a letter urging the White House to veto such a move if it supported a “one-sided” resolution.

When asked if she could guarantee that the United States would not support such a resolution, or allow its passage, Rice hedged.

“I think our record speaks for itself,” she answered. “Which is that we have spent seven and a half years of the Obama administration fighting and defeating efforts to delegitimize or otherwise single out Israel unfairly. I spent four and a half years of my life doing that at the U.N., and Ambassador [Samantha] Power is doing the same — all at President Obama’s direction. So I think our record is the best indication of how we would approach this.”

But she added: “I would be foolish and no one would ever rule out action [on a] hypothetical, and that’s what we are talking about. But our view remains as I just said, that the only way to resolve the Israeli-Palestinian conflict is through a negotiated solution; that means the two parties sitting down, face to face.”

Rice acknowledged the mounting frustrations in Europe that a peaceful resolution is slipping away, which is what prompted French President Francois Hollande to convene the June 3 meeting attended by Kerry, U.N. Secretary-General Ban Ki-moon and representatives of the Arab League, the European Union and key Arab states. Israelis and Palestinians were absent.

And that frustration, she said, “raises the possibility that some members of the international community could seek various forms of international action, including potentially a Security Council resolution. We worked very hard on the one hand to discourage that kind of effort, with success. But also to encourage the two parties to recognize that it is in their interests to create both the circumstances and the political will necessary to sit down and have a meaningful direct negotiation.”

Ever the diplomat, Rice flat-out refused to answer a question about Secretary of State Hillary Clinton’s recent criticism of Donald Trump’s foreign policy proposals and his temperament as commander in chief. She shooed away the question more abruptly than some might have.

“We’re not getting into politics,” she said. “You can stop right there. I’m not getting into any politics. I can’t. It’s inappropriate and can border on illegal, so don’t waste your time on that.”