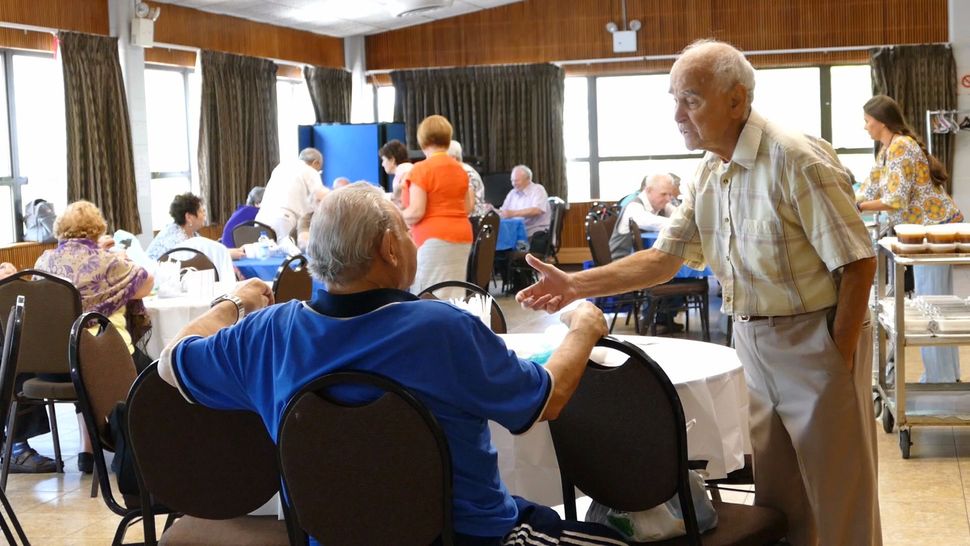 At a senior center in South Brooklyn, the old Jewish immigrants from the former Soviet bloc can’t wait to vote for Donald Trump.

“I like his honesty, that he’s against Muslims, that he’s against refugees,” said Valentina Albert, a former refugee from Moldova whose husband was Jewish. “I think that our lives, the lives of immigrants from Russia, will be better and richer [with Trump.]”

Seated at round tables in a long auditorium, the Russian-speaking immigrants were waiting for their lunch on a recent weekday morning. The only English to be heard was spoken by the Forward reporters, who had come to talk politics.

The seniors like to fight about politics. During the 2014 conflict in Ukraine, one man got so excited during an argument that he was taken the hospital with heart trouble. These days, the conversation is all about the U.S. presidential race. Whether they were born in Ukraine or Azerbaijan or Belarus, and whether they came to the United States as immigrants in the 1970s or as refugees in the’90s, all support the same candidate.

“I think Trump is a man…” said Olga Dubova, 82, a hairdresser who emigrated from Ukraine in 1995. “We also came here as immigrants in our own time. Bu t we can’t let crooks in.”

“I think that enough immigrants entered this country,” said Rosa Berezovskaya, 86, who emigrated from Kiev in 2003. “We really need a new stream that will bring America back to what it was.” 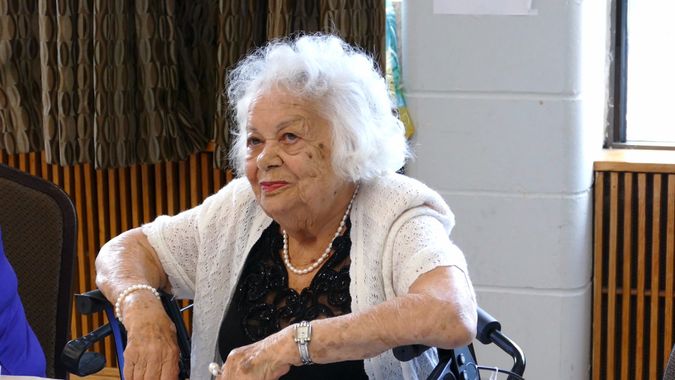 Rosa Berezovskaya, 86, emigrated from Ukraine in 2003. She supports Donald Trump for president. Image by Thea Glassman

In Russian-speaking Jewish communities in South Brooklyn, the Trump fans at the senior center are not alone. That sets them apart from the American Jewish community at large, where Trump has struggled to find traction. Yet Trump’s promise to halt Muslim immigration to the United States, along with his strongman persona, has struck a chord among New York City’s Russian-speaking Jews.

“There is a widely spread opinion in the Russian Jewish community that… all Muslims are terrorists,” said Alec Brook-Krasny, a local businessman and a former member of the New York State Assembly who opposes that view, and supports Clinton in the presidential race.

Many in the Russian Jewish community in South Brooklyn are suspicious of, and even hostile toward, Muslims. Members of the community spent years fighting the construction of a mosque on Voorhies Avenue in Sheepshead Bay. The dispute began in 2010; as recently as this February, the mosque had yet to open, and its members were using a closed Burger King as a prayer space.

Brook-Krasny, who was born in Moscow, said that Russian Jews’ anti-Muslim sentiments have their roots in the community’s Soviet experience. “In the Soviet Union they were proclaiming that everyone is equal to everyone else,” Brook-Krasny said. “But in reality it was such a tension between different nationalities you wouldn’t believe. I think this was something that really has its roots somewhere in there.”

While some of Trump’s most vociferous Republican critics have been conservative Jewish writers like Weekly Standard editor Bill Kristol and neoconservative intellectual Robert Kagan, the New York-based Russian-language media consumed by the Russian Jewish community is packed with Trump fans. Victor Topaller, a popular conservative radio host who is known as the “Russian Rush Limbaugh” and has a program on the Russian-language Brooklyn AM station Davidzon Radio, is an enthusiastic Trump booster. “I can tell you only one thing,” Topaller said. “In my opinion, better 1,000 Trumps than one Hillary.”

Local political observers say that they expect Trump to win the community by a substantial margin in November. “I see like close to 80% are planning to vote for Trump,” said Ari Kagan, a Belarus-born former journalist who is a Democratic district leader in Sheepshead Bay and Brighton Beach, and a Clinton supporter.

Only one client among the Russian-speaking Jews at the senior center identified herself as a supporter of Clinton, but she declined to speak with the Forward. Staff at the center said she didn’t want to contradict a room full of her friends.

“The people who came from Russia and the former Soviet Union are doctors, teachers, lawyers,” said Leonid Lvovich, 87, who emigrated from Azerbaijan in 1992. “The people who come from Latin America are lower-class workers.” 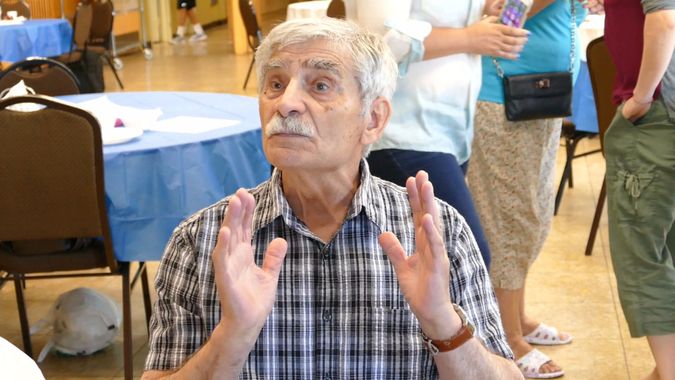 Naum Novisiletsky, 89, said that in the Soviet Union, “we had socialism up to here.” Image by Thea Glassman

Mikhail Lando, who came from Kiev in 1994, framed the current immigration debate around security questions. “Let’s do what [Trump] says,” Lando said. “Accurately screen the people who are coming to the U.S. Europe’s experience shows we have to take this seriously.”

For many of the Russian-speaking Jews, echoes of the life they fled in the former Soviet Union seem to shape how they see American politics. At the senior center, the former Soviets retain a terror of socialism, an ideology that they tie to the Democrats. “We spent 50 years under [Bernie] Sanders in the Soviet Union,” said Naum Novosiletsky, an 89-year-old former builder from Kiev who said he is voting for Trump because his children support the candidate. “We had socialism up to here,” he said, slicing his hand across his throat.

Meanwhile, for the minority of Russian Jews who oppose Trump, it’s his perceived affinity for the autocratic politics of Russia that drive their opposition.

“Hearing [Trump] sounds like [Russian president Vladimir Putin] to me,” said Kagan, the district leader. “He loves only when people praise him. Nobody loves criticism, of course. But we live in America. That’s the point. To me, that’s the whole point.”

Yet Trump’s Russian-speaking Jewish fans take opposite lessons from the political history through which they have lived. “Putin is a person who let power get to him,” Lando said. “Even if Trump becomes president, there is very little possibility that [the House of Representatives] and the Senate will let him take on the same role as Putin. There it’s for life.”