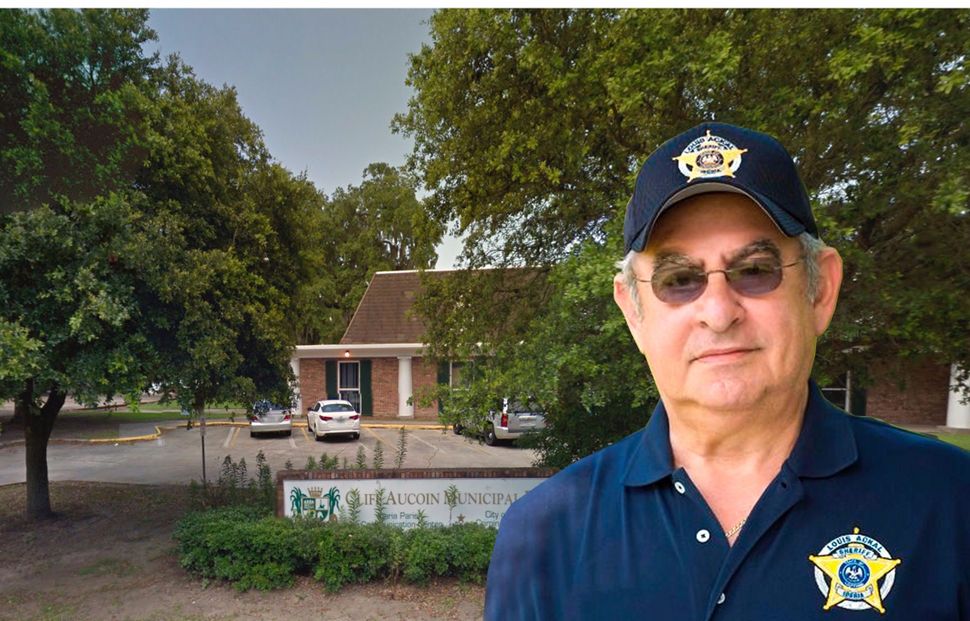 A Louisiana sheriff who allegedly called a federal prosecutor a “son-of-a-bitch Jew bastard” and threatened to shoot him “right between [his] goddamned Jewish eyes” is facing a recall push over the shocking rant.

Despite protests calling for Iberia Parish Sheriff Louis Ackal’s resignation since April, he has remained employed as the sheriff.

Donald Broussard, vice chair of the Ackal recall effort, told local ABC affiliate KATC that his group hopes to collect the required signatures to hold a recall vote — one-third of all registered voters in the area — in time to put the vote on the general election ballot this fall.

Broussard said his group is trying not only to recall Ackal for allegedly mistreating inmates, but also to restore trust in the sheriff’s office. He found the sheriff’s alleged comments revealing.

“To the sheriff, I say, keep talking,” he said. “A man’s mouth lets you know where his heart is.”

Ackal allegedly made the comments, which are believed to reference the Justice Department’s special litigation counsel, Mark Blumberg, while being secretly recorded in March, according to a motion filed by prosecutors.

Blumberg met with Ackal in May regarding the sheriff’s pending civil rights trial, where prosecutors may have pushed Ackal to provide them with information on others under investigation, according to an excerpt of the comments Ackal allegedly made. However, prosecutors do not agree with Ackal’s alleged characterization of the meeting in the recordings, claiming the meeting involved attorneys for both parties and was “cordial and professional.”

Though Ackal’s attorney, John McLindon, could not immediately be reached for comment, he told The Advocate that neither he nor his client had been provided with copies of the recording, and therefore could not comment.

The motion asked for new conditions modifying Ackal’s release from jail pending his trial. New restrictions would include limits on the consumption of alcohol, and a restraining order barring contact with alleged victims in the investigation. Currently, Ackal’s only condition is that he must not possess a firearm.

Anti-Semitism has always been a part of the South, just as it has been present in many parts of the United States, said Mark Potok, a senior fellow with the Southern Poverty Law Center. However, Potok said there has been a rise in all kinds of racial, religious and ethnic bigotry in the country.

“This is a pretty remarkable statement, if the sheriff did in fact make it,” he told the Forward. “I think the trend we’re seeing is an amazing willingness in many quarters to vilify people with language that should have disappeared decades ago.”

Ackal was indicted in March by a federal grand jury as part of a probe into inmate abuse and cover-ups within the Iberia Parish Sheriff’s Office. Prosecutors claim Ackal, along with Lt. Col. Gerald Savoy and Capt. Mark Frederick, took five inmates to the jail’s chapel — where there are no cameras — and beat them with a baton. They also claim in the indictment that Ackal, after discovering that one of the inmates was imprisoned for a sex offense, posed with his baton as if it were his penis and forcibly violated the inmate’s mouth.

All three men pleaded not guilty to all charges.

Democratic U.S. Rep. Cedric Richmond of Louisiana, sent a letter to U.S. Attorney General Loretta Lynch last year requesting a civil rights investigation of the Iberia Parish Sheriff’s Office, citing the eight deaths in sheriff’s custody since 2005 as well as the more than $1 million in civil court settlements for complaints including excessive force.

A federal grand jury issued a superseding indictment in June that added another charge of conspiracy against rights after Ackal allegedly assaulted a person suspected of attacking one of Ackal’s relatives during that person’s arrest. The new charges add to his existing charge of conspiracy and two charges of depriving civil rights.

Nine sheriff’s deputies have pleaded guilty in the course of the federal investigation so far.