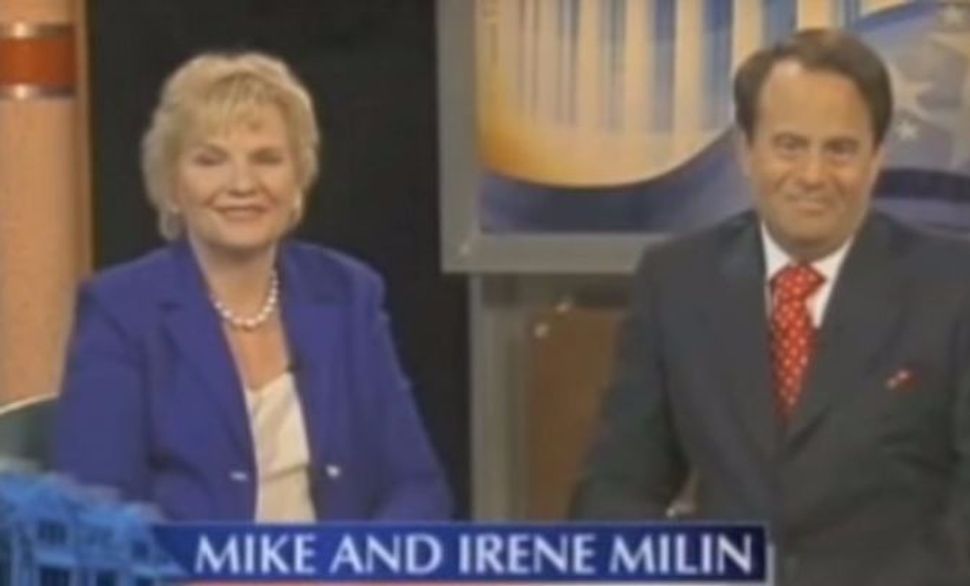 Mike and Irene Milin in an ad for the National Grants Conferences. Image by YouTube

New revelations about one of Donald Trump’s for-profit educational ventures have turned the spotlight on a Jewish Florida couple with their own checkered past in business — and a record of devotion to Jewish causes, especially Israel.

Though the now-defunct Trump Institute bore the name of the presumptive GOP presidential nominee, in reality it had little to do with him — which was part of the problem. Run and operated by Michael and Irene Milin of Boca Raton, the Trump Institute had promised its students that for prices of up to $2,000 they would have access both to Trump’s wealth of knowledge, as well as to teachers hand-picked by the real estate mogul.

Instead, seminar students received a copyrighted Trump Institute book called “Billionaire’s Roadmap to Success,” which allegedly had nearly 20 pages copied in part or in its entirety from a 1995 real estate guide, according to a report by The New York Times.

Trump’s in-house counsel, Alan Garten, told The New York Times the agreement with the Trump Institute was a short-term licensing deal, in which Trump lent his name and presumed endorsement to the institute. While Garten said Trump executives were unaware of the Milins’ business past at the time of the deal, or any plagiarism by the institute, he said the product was good.

“I stand by the curriculum that was taught at both Trump University and Trump Institute,” he said.

Garten, the Milins’s former lawyer Peter Hoppenfeld, and the editor of the Trump Institute book Susan Parker all denied knowledge of the plagiarism, which was discovered by Democratic super PAC American Bridge.

According to a report by the Daily Beast, Michael Milin worked in the mid-1980s as an employee for Tony Hoffman, the alleged author of other get-rick-quick schemes, whose bankruptcy in 1986 spurred the Milins to create their own seminar business. Starting in Texas as Information Seminars International, the Milins quickly found themselves in trouble.

In 1993, Texas attorney general Dan Morales accused the Milins of taking customer money and running after they allegedly failed to provide the services they had promised. By 2001, the Milins, then-operating as National Grants Conferences, settled with the state of Florida following accusations they violated the state’s Deceptive and Unfair Trade Practices Act. In 2006, the year they launched the Trump Institute, the Milins were being sued by Vermont’s attorney general for consumer fraud, leading to $65,000 in fines and up to $300,000 in refunds to dissatisfied customers.

Even following their new enterprise as the Trump Institute, the Milins’ business practices attracted attention, eventually earning them an “F” from the Better Business Bureau. Thirty-three state attorneys general and the attorney general of Guam sent a letter in 2007 to the Federal Trade Commission citing National Grants Conferences as a prime example of fraudulent practices, and a 2010 Texas ruling said the couple could no longer advertise in the state.

National Grants Conferences soon sought bankruptcy protection in 2008, owing more than $2 million, according to the Tampa Bay Times. The Trump Institute closed around that time, and the Trump-owned parent Trump University closed in 2010 amid lawsuits from former students.

Michael and Irene Milin could not immediately be reached for comment by the Forward. However, Irene Milin allegedly hung up on a reporter from The New York Times and would not answer subsequent calls.

Despite appearing to have retired from both business and from public life, the Milins remain strong supporters of their local Jewish community, as well as pro-Israel politicians on both sides of the aisle.

Though they were disappointed by the former presidential contender Mitt Romney’s loss to President Barack Obama in 2012, the Milins have personally donated tens of thousands of dollars to candidates ranging from Democratic Sen. Dianne Feinstein to former GOP Rep. Allen West because of their support of Israel.

Active members of the American Israel Public Affairs Committee, Michael and Irene Milin have spent time lobbying for Israel, to which they emigrated briefly in the 1990s, according to Haaretz.

“We worked very hard on [the Iran] sanctions, but the president was not at all helpful,” Michael Milin said in 2012.

In addition to personal giving, the Milins have also given charitable contributions to a slew of Jewish organizations through the Milin Family Foundation, which was established in 2000 and became tax-exempt in 2002. While the foundation listed net assets of nearly $1.5 million in 2013, it is unclear whether the foundation is still active.

The foundation gave nearly $260,000 to Jewish organizations in 2012 and 2013 combined, according to tax records. The most prominent recipient, AIPAC’s charitable organization wing, received more than half of that money alone.

The Hebrew Academy Community School, a Lubavitcher school in Margate, Florida, received $41,500 from the Milin Family Foundation. According to the school’s website, the Hebrew Academy provides “authentic” Torah education alongside general secular education, and it is operated in accordance with the “worldview of Chabad philosophy.”

Michael “Mike” Milin was also listed as a member of the Hillel’s board of directors. When the Forward called the Hillel of Broward and Palm Beach to confirm, a Hillel spokesperson said that it was not something they could comment on at that time. Since the Forward called, Michael Milin’s name has been removed from the list.