Nathan and Joshua Katz, two brothers from Australia now headed to the Olympics, are Jews with judo in their blood.

Nathan, who is 21, and Joshua, age 18, inherited their love for the Japanese martial art from their parents, both of whom were judo fighters, too.

Now they’ve made it to the Olympics.

The two young men qualified in June by remaining in the top 22 of the Olympic-adjusted world rankings in their respective weight divisions. The two will be Australia’s first set of brothers to compete in judo at the Olympics at the same time. And this truly is a family affair — the siblings’ mother, Kerrye, competed at the Seoul Olympics in 1988 and their father, Robert, was a coach.

On top of that, Joshua will become the youngest Australian male Olympian judoka, as players are known, when he heads into battle at the Maracana Stadium for the opening ceremony on August 5.

“It’s something we’ve dreamed about since were little kids,” Joshua told 9news, an Australian news outlet.

Already a rising star in the junior ranks, Josh won four junior Oceania Championships between 2012 and 2015; he also won junior national championships in 2013 and 2014.

“It’s really amazing to be able to share the whole Olympic experience with my brother,” Joshua said in an interview with the Daily Telegraph. “We’ve been training partners since we were kids and we want each other to achieve everything the other one does.”

“With Mum competing in 1988 and Dad the Olympic coach they appreciate what goes on to make this happen. I think they are very excited for us because they’ve been through it all with us.” 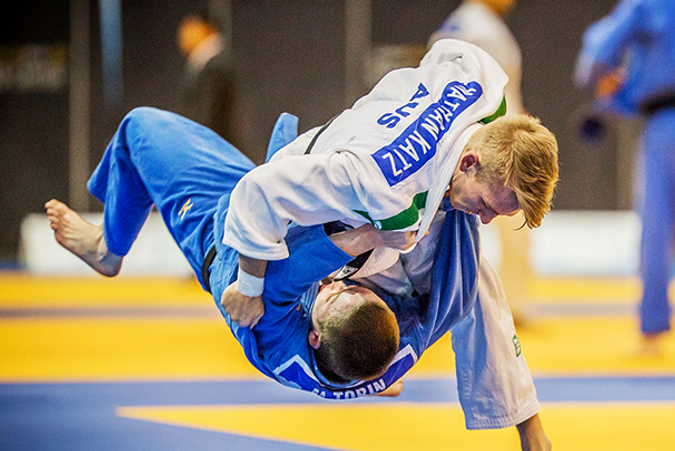 Judo Jew: Nathan Katz, in white, throws an opponent in a judo match. Image by YouTube

In an interview with Huffington Post, Nathan said that he had garnered some life lessons from the combat sport. “Judo is always about respecting other people. You bow before you fight and shake hands and that sort of thing,” he said. “I’ve had some real wars with some of my best mates but I think leaving all that on the mat is a big factor.”

Remarkably, the two are not the only siblings from Australia headed to the Olympics — there are five other pairs.