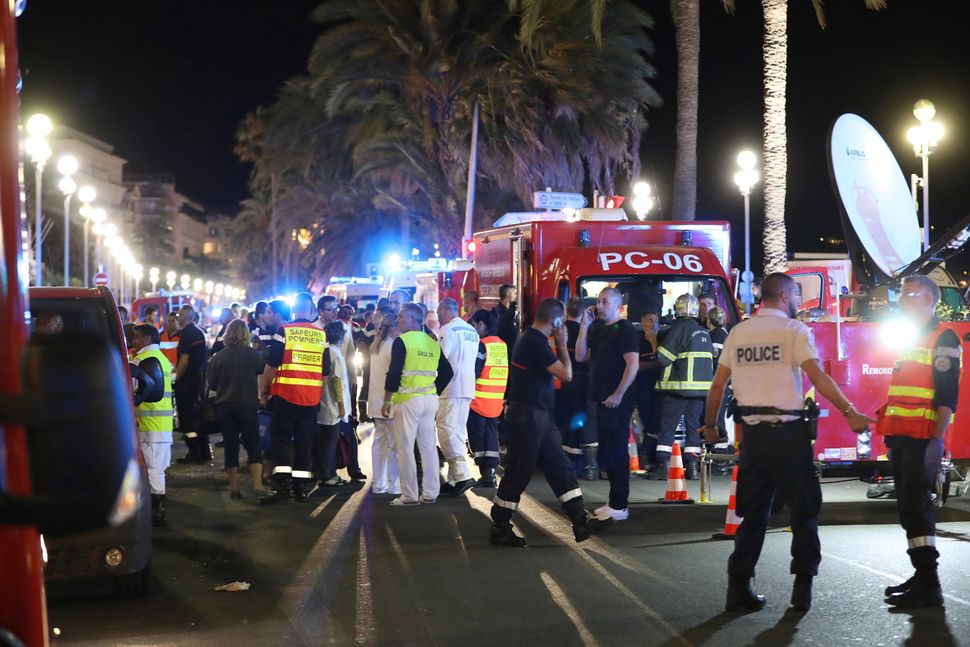 Police officers, firefighters and rescue workers are seen at the site of a terror attack in Nice, France on July 15, 2016. Image by Getty Images

Two Jewish sisters were injured in the attack. Clara Bensimon, 80 and Raymonde Mamane, 77, were in critical condition and on respirators in a local hospital Friday, according to the Times of Israel.

Staff of Chabad’s Gan Israel day camp were at the scene of the terror attack just moments before a truck driver plowed into the crowd, killing 84, according to Chabad.org.

The group escaped harm when they crossed the street right before the carnage.

“They had to run from the truck. It was just a few feet away from them,” said Rabbi Yossef Yitschok Pinson, director of the local Chabad.

Six Jews were reported to be among those missing or injured in the attack.

Chabad.org listed four of the Jews by their Hebrew names and names of their mother (as is the custom when one is praying for someone who is sick): Axel ben Yael, Moshe ben Yaakov,Clara bat Nouna and Yonathan ben Zuzy.

Also among the injured or missing Jews were John Dray and Dominique Azan, according to the site.