Is New York Attorney General Eric Schneiderman the One To Take Down Donald Trump? 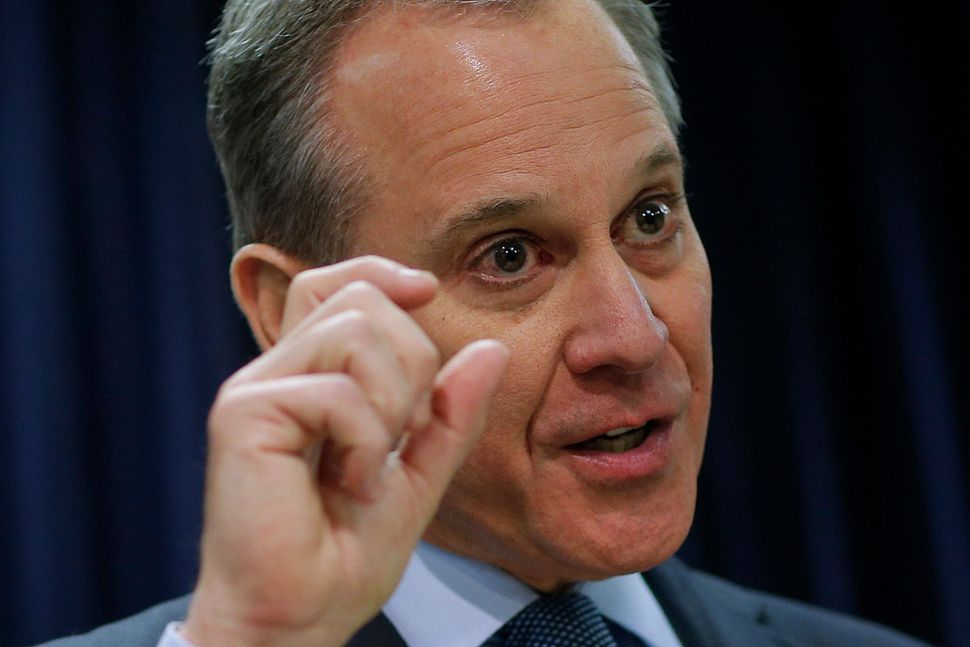 Donald Trump is a “failed, fraudulent businessman.” He has given “explicit endorsement to anti-Semitic imagery.” He is “dangerous, offensive, and grossly uninformed.”

Schneiderman’s new criticisms of the Republican nominee, which he made in a statement to the Forward on July 13, go beyond the Upper West Side Democrat’s previous public statements, which have mostly focused on his high-profile lawsuit against Trump University, Trump’s for-profit business seminar program.

“As a Democrat and a Jewish American, I feel that I have a duty to help prevent such a dangerous, offensive, and grossly uninformed individual from occupying the Oval Office,” Schneiderman told the Forward in his statement.

Schneiderman said that Trump has “made appalling overtures to the most bigoted, ignorant segments of our society: giving explicit endorsement to anti-Semitic imagery, displaying a lack of respect for women over the course of decades, and espousing anti-immigrant policies that ignore the Constitution and threaten the fabric of our democracy.”

A former New York State Senator who gained national prominence as the leader of a multi-agency task force to investigate the mortgage crisis, Schneiderman is a close ally of Congressman Jerry Nadler and a New York City liberal stalwart. He is a member of an Upper West Side synagogue and has been New York State’s Attorney General since 2011.

Schneiderman has clashed with Trump for years. His Trump University lawsuit, filed in 2013, demands $40 million from the former school, and claims that the program defrauded its students. In 2014, The New York Observer, a paper owned by Trump son-in-law Jared Kushner, ran a lengthy piece attacking Schneiderman.

Now, with Trump days away from being officially selected as the presidential nominee of the Republican party, Schneiderman is taking public whacks at Trump. In a June op-ed in the New York Daily News about the Trump University case, Schneiderman compared Trump to the original snake-oil salesman, Clark Stanley, who purported to sell a snake oil cure-all at the 1893 World’s Fair.

“Using false promises to prey on desperate people has long been a hallmark of ‘snake-oil salesmen,” Schneiderman wrote. “A lawsuit by my office alleges that Donald Trump was basically doing the same thing with Trump University.”

The same day that the Daily News op-ed ran, Schneiderman went on MSNBC to call Trump University a “straight up fraud.”

The anti-Trump push comes as Schneiderman has been fundraising intensively for the 2018 elections. According to a July 14 report in the New York Daily News, Schneiderman has more than $5 million in his campaign war chest, $1.6 million of which he has raised since January. That’s a big haul for an elected official who faces no campaign for another 12 months.

Schneiderman is expected to run for another term as Attorney General in 2018. But in New York, the last two Attorneys General have gone on to serve as Governor, Schneiderman is widely suspected of having eyes on the Executive Mansion.

“Being vocal about Trump solidifies [Schneiderman’s] constituency in New York City, expands it into Latinos, possibly, and improves his poll numbers to a point where he will be more likely to run for governor when there’s an opportunity,” said longtime Democratic consultant Hank Sheinkopf. “Everything in every politician’s life is about some race someday.”

The political risks for Schneiderman in lashing out at Trump, meanwhile, appear to be minimal. Trump has few fans among Schneiderman’s constituents. In a June 30 Siena College poll, Trump trailed Hillary Clinton by more than 20%.

Schneiderman’s hits on Trump haven’t been confined to the context of the Trump University case. In early June, Schneiderman tweeted his approval of a column by a New York Observer staff writer criticizing Kushner for failing to call out Trump’s coddling of anti-Semites.

On that same Twitter account, Schneiderman has placed triple-parenthesis around his name, a gesture of defiance against online anti-Semitic abuse by some Trump supporters.

Is New York Attorney General Eric Schneiderman the One To Take Down Donald Trump?