Donald Trump’s campaign rolled out a new logo to promote his announcement that Indiana Gov. Mike Pence will be running for vice president on the GOP ticket. Now, the Trump campaign is maybe wishing it had given it a second look.

While Trump’s pick drew little attention given that news media had been reporting Pence’s name for nearly 24 hours, the campaign’s newly minted logo certainly did.

Many were concerned about what the logo might portend for Pence.

We all knew that any politician who became Trump’s running mate would be screwed for life, but this is a bit blunt.pic.twitter.com/xg0LYB8uuf

Someone in my office just asked if the Trump-Pence logo was consensual.

Others, like Jewish Rep. Alan Grayson, D-Fla., felt the new Trump logo was a perfect fit.

This logo accurately represents what Trump Pence will do to America. pic.twitter.com/HQisP8QVzb

According to several reports, Trump regretted picking Pence as his vice president and was up until midnight Thursday making calls asking his aides whether he could change his mind.

However, some argue that the campaign’s new logo should put those stories to bed.

Trump wasn’t wavering on Pence. It was just hard to get the T into the P.

Still, others said they didn’t see anything sexual implied by the logo. But they agreed it was certainly explosive.

Maybe because I’m aesthetitically blind, but I’m the only person who sees nothing sexual in the Trump-Pence logo pic.twitter.com/BvHZNBPvOi

I see a Wily Coyote TNT detonator from the ACME catalogue https://t.co/UraKbXOvfC

Seemingly in response to mass mockery from all corners of the Internet, the Trump campaign issued a new logo on Saturday that resolved the graphically-derived issue of the old logo.

Checking out podium at Trump-Pence announcement, seems the joint logo rolled out yesterday to the great amusement of many has been axed. 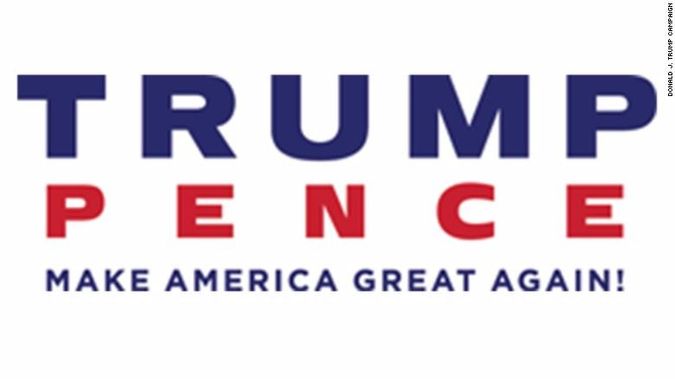 The campaign did not acknowledge any issues with the original Trump-Pence logo, instead saying the design was just one of many.

“We have a number of logos. The final one won’t be unveiled until the convention,” Trump campaign spokesman Jason Miller told CNN.

As the Trump campaign moves on and prepares for the Republican National Convention this week, many can’t help but feel nostalgic for the Trump logo that brought people such joy in the midst of a week filled with tragedy.

@omar_lizardo don’t blame me, I tried to be an adult about it