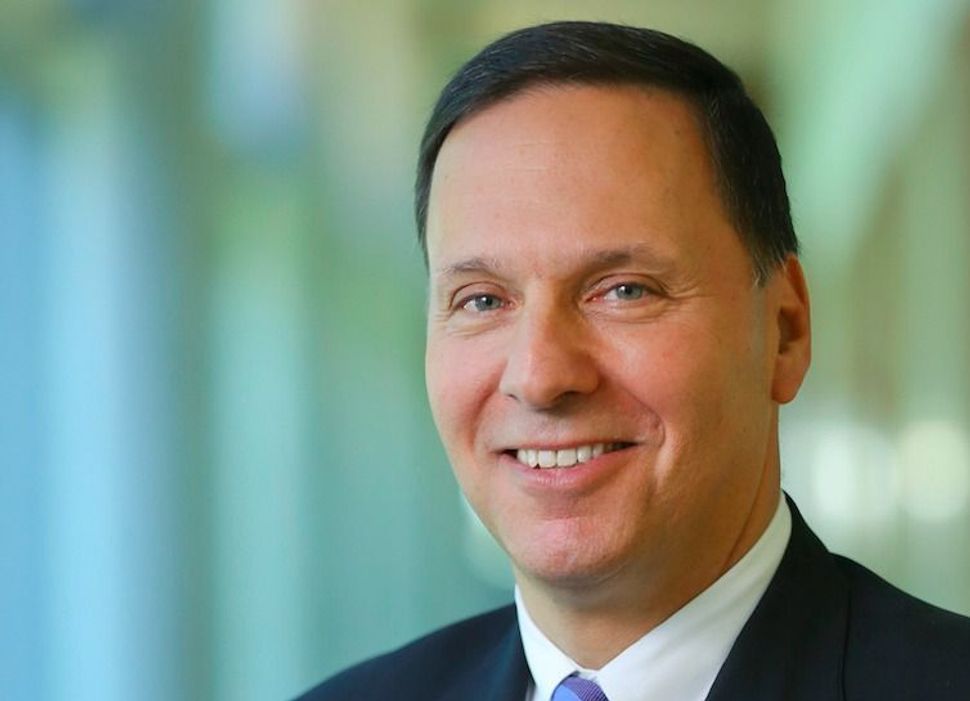 On July 1, the 59-year-old New York native took the reins as the ninth president of Brandeis, a Jewish-sponsored, nonsectarian research university in suburban Boston with an enrollment of 3,600 undergraduates and more than 2,000 graduate students. Liebowitz was appointed to the position last December.

“Yeah, I’m nervous in some ways,” Liebowitz acknowledged with a chuckle.

But any new-job jitters are tempered by decades of experience as an acclaimed leader in higher education. A scholar of political geography who specializes in Russia, Liebowitz rose from faculty member to provost at Middlebury before being tapped in 2004 for its highest position. In 2009, Time magazine named him one of the 10 best U.S. college presidents.

Liebowitz said he was attracted to Brandeis because of its strong liberal arts education combined with its investment in high quality research. But discovering more about the school’s founding by the Jewish community in 1948 was very persuasive, he said.

“It was formed to give Jewish students the opportunity to come to a first-rate institution, but also underrepresented students from across the spectrum. Being open to all has taken on new meaning. It was very compelling. Today it’s as relevant as ever,” he said.

Liebowitz and his wife, Jessica, and their three children live in Newton, Massachusetts, near the Brandeis campus in Waltham. The couple is collaborating on research on the future of U.S. doctoral education. They’ve been warmly welcomed at Congregation Kehillath Israel in nearby Brookline, Liebowitz reported. His children attend a local Jewish day school.

He has taken the helm following a few years when Brandeis made national news on the hot-button issues of campus free speech and racial diversity: In 2014, the university withdrew a speaking invitation to human rights activist Ayaan Hirsi Ali over comments she had made criticizing Islam, and last year the campus was divided over inflammatory comments tweeted by an African-American student following the funeral of two slain New York police officers and the critical response by a conservative Jewish student.

He succeeds Frederick Lawrence, who left after four years on the job, and Lawrence’s interim replacement, Lisa Lynch.

A warm and congenial leader, Liebowitz shared his views with JTA on diversity, free speech and anti-Semitism during a conversation in his office at the Irving Presidential Enclave, where the bookshelves were still nearly bare and some boxes were still unpacked.

Below is a condensed and edited version of the interview.

JTA: What does being open to all students mean today?

Liebowitz: I’m a firm believer that any institution benefits in terms of the quality of education if it’s diverse, if it has people from many backgrounds, different life experiences, different perspectives talking to one another. If done properly, if there is really a mix of students brought together on campus, it’s an incredible learning environment and that’s what we aspire to.

How do you envision continuing Brandeis’ historical connection with the Jewish community?

The institution never loses its founding spirit and the Jewish values established here of academic excellence and critical analysis. I’d add to that being self critical. The third is “tikkun olam,” healing the world. I see that in our student body. They are extremely engaged locally and also globally.

What about specific Jewish practices on campus such as the schedule and food?

We want to continue being the place where all Jews feel comfortable on this campus. That requires us to respect some aspects of Jewish life like diet, holidays and so forth. I see us continuing in that vein.

An online survey last year by Trinity College and the Louis D. Brandeis Center for Human Rights Under Law [unrelated to Brandeis University] found that more than half of Jewish students in U.S. colleges reported experiencing anti-Semitism. Is that reflected at Brandeis? What role does Brandeis play in that conversation?

Anti-Semitism is unfortunately showing itself everywhere, in Europe and in the U.S., and on college campuses. There was a survey of students [at Brandeis]. One of the more heartening issues is that students who identified themselves as Jewish noted their level of comfort was extremely high. I think Brandeis is a beacon and can be a model. The BDS issue, which is generating a lot of these issues on other campuses, seems to be much less of a factor. There is a BDS presence, but here it’s not seen as a major issue.

What are your views on the debates over free speech on campus. Are students too fragile?

I’m a big proponent of free speech, especially in an educational environment. It comes with rules about how people interact. You can’t hurt. You can insult with your ideas. I think students need to be free to speak. Faculty need to be free to speak. But respect is needed as well as civility. Those two things are very crucial. With intimidation tactics that we’ve seen or heard about, you really lessen the educational quality.

Are you going to address this issue?

Oh yes. We will have this on the agenda for sure. The University of Chicago is noted for its [free speech policy] statement, which I find compelling. We want to protect students, but we also don’t want to shield them from ideas they might not think about. They’re not here to get insulted, but they are here to hear things. Sometimes discomfort is an important element of education.

There was a 12-day sit-in last year by Brandeis students protesting a lack of racial diversity. What is the status of the agreement negotiated between the administration and the students?

Before she went back to the Provost’s office, [interim President] Lisa Lynch sent out an update on the recommendations. We’ll engage each one of those. There are real challenges when it comes to diversity. There are creative programs out there to bring more recently minted Ph.D.s into institutions like Brandeis. But keeping them is difficult because they are easily raided by wealthier and larger institutions. So we have to do this in a creative way.

Is being Jewish important in the role of Brandeis president?

It’s important for a particular group, but I think we also have to be much broader in our fundraising. Brandeis has really thrived for 68 years with incredible philanthropy from the Jewish community. But we also want to reach out to the alums, more and more of whom over the years will be non-Jewish. That’s really been the demographics.

What are you planning to say when you welcome incoming freshmen?

I think we should be aspirational in how we engage students as they set out on their college career. [At Middlebury], I left the advice to the people who do orientation. I try to stay at a higher level about the full four-year experience. But I need to learn more about Brandeis to tailor some of the comments I will make.