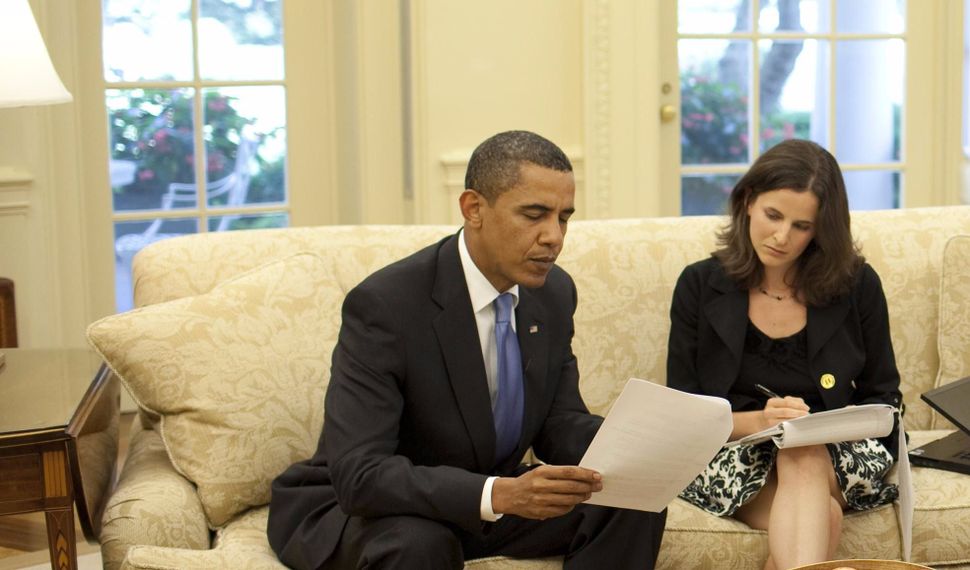 Sarah Hurwitz, a Jewish speechwriter for Michelle Obama, wrote the 2008 speech that Melania Trump apparently cribbed for her own debut speech on the opening night of the Republican National Convention.

Hurwitz now works at the White House as a senior adviser, and once worked for Hillary Clinton. She helped pen the message delivered by the future first lady at the Democratic convention that nominated Barack Obama, the Week reported.

The Washington Post reported that Hurwitz has been involved in composing nearly every public address given by Michelle Obama for the last seven years.

Originally from Wayland, Massachusetts, near Boston, Hurwitz attended Harvard University as an undergraduate and then Harvard Law School. The Post reported that she takes classes on Judaism in her spare time.

Composing Michelle Obama’s speech at the 2008 Democratic National Convention was one of Hurwitz’s first jobs on the campaign. In a meeting at the Obamas’ Chicago home, Michelle Obama laid out for Hurwitz what her story was and what she wanted to say at the convention.

“I realized then that Michelle Obama knows who she is, and she always knows what she wants to say,” Hurwitz told the Post.

Neither Hurwitz nor the White House have released a public statement about the apparent plagiarism of the speech.

The New York Times compared the transcripts of Obama’s and Melania’s speeches and the similarities are striking.

From a young age, my parents impressed on me the values that you work hard for what you want in life, that your word is your bond and you do what you say and keep your promise, that you treat people with respect. They taught and showed me values and morals in their daily lives. That is a lesson that I continue to pass along to our son. And we need to pass those lessons on to the many generations to follow.Because we want our children in this nation to know that the only limit to your achievements is the strength of your dreams and your willingness to work for them.

Barack and I were raised with so many of the same values: that you work hard for what you want in life; that your word is your bond and you do what you say you’re going to do; that you treat people with dignity and respect, even if you don’t know them, and even if you don’t agree with them. And Barack and I set out to build lives guided by these values, and pass them on to the next generation. Because we want our children — and all children in this nation — to know that the only limit to the height of your achievements is the reach of your dreams and your willingness to work for them.

Revelation of the similarities between the two speeches set off a cascade of accusations and finger-pointing within the Trump campaign and the Republican National Committee. But one Trump follower claimed to know exactly what happened. White supremacist David Duke declared on his website that the alleged plagiarism was caused by “intentional sabotage and treachery” by what Duke called a “Jewish neocon speechwriter.”

“Zio Fingerprints are all over this one,” Duke wrote.

Trump has disavowed Duke’s comments in the past. No word yet about this latest statement.

After Donald Trump, Jr.’s speech Tuesday night at the RNC, the Daily Show tweeted two pictures comparing a section in his speech to an article written by law professor F. H. Buckley in the magazine The American Conservative.

Buckley, a professor at George Mason University, subsequently told Vox that he was a principal speechwriter for Trump, Jr.’s speech.

On including his earlier writing in Tuesday night’s speech, Buckley told Vox, “it’s not an issue.”