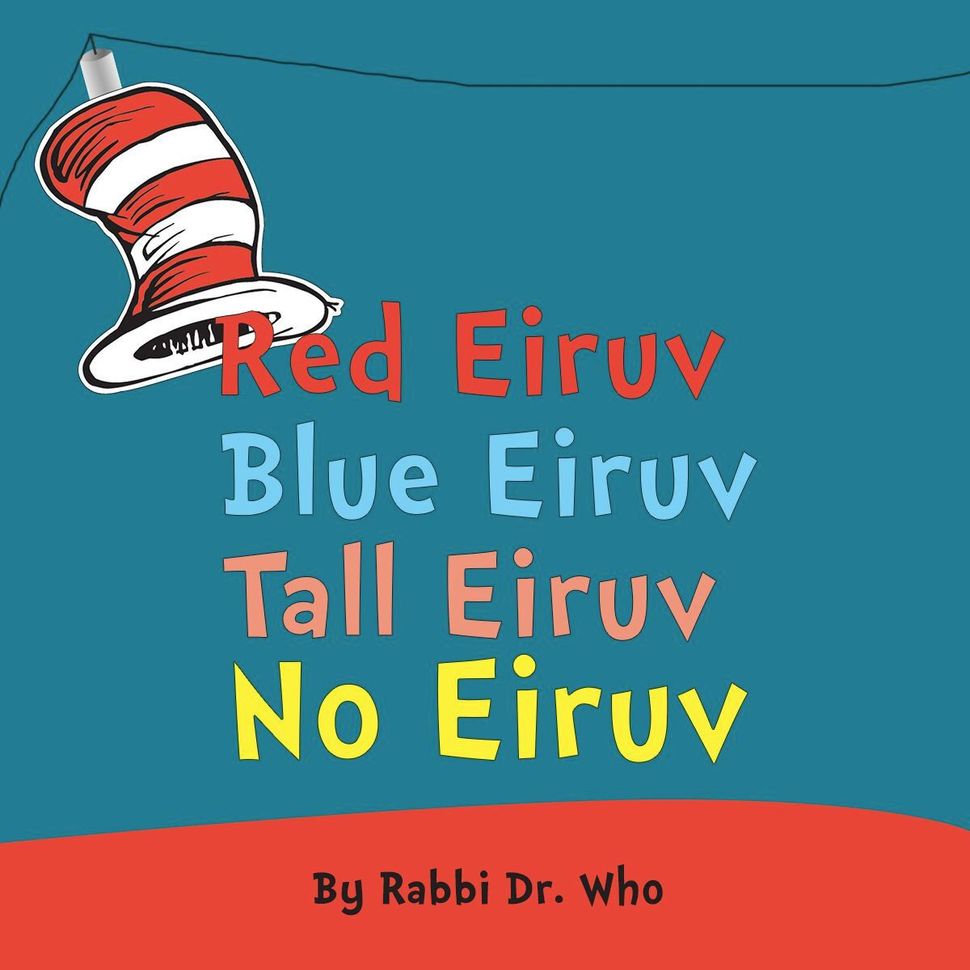 Image by Courtesy of Shmuli Evers

A tense religious dispute between Modern Orthodox and Hasidic Jews in Brooklyn over a new eruv is now getting it’s first literary treatment — as a Dr. Seuss-style poem.

“Red eruv, blue eruv, tall, eruv, no eruv,” the poem is called, penned by “Rabbi Dr. Who,” and is largely a call for peace.

“What good is it — this tit for tat, to ridicule a Yid like that?” the poem reads. “Just give a kush, I’ll hug you back.” 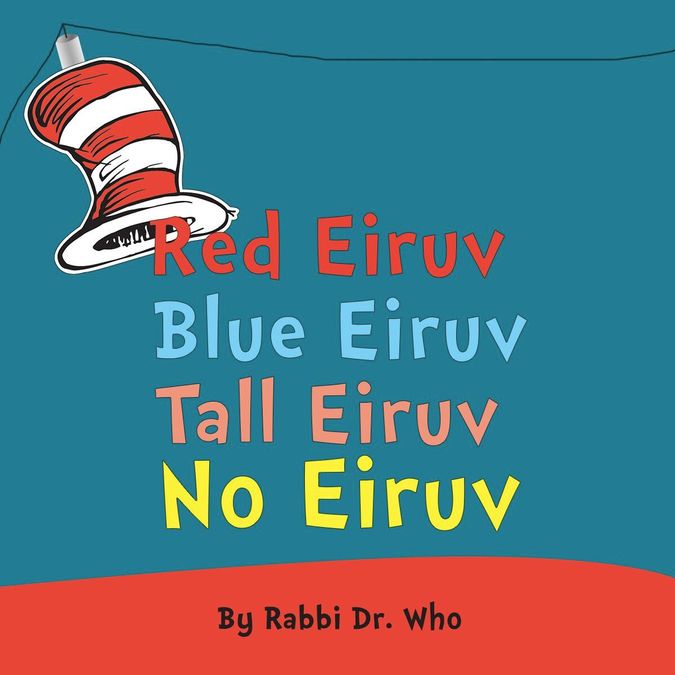 Image by Courtesy of Shmuli Evers

The 14-stanza illustrated poem is a creation of two Crown Heights Lubavitchers, Moshe Kravitsky, the writer, and Shmuli Evers, the illustrator. It amounts to a literary commentary on the still-brewing controversy around a disputed ritual boundary in the neighborhood.

Eruvs are wires that allow Orthodox Jews to carry goods on the Sabbath. The one in Crown Heights is controversial because Modern Orthodox Jews created it but many Lubavitcher rabbis oppose it.

Kravitky posted the poem and cover image, which is loosely based on Dr. Seuss’s 1960 classic One Fish Two Fish Red Fish Blue Fish, on his public Facebook page.

“What good is it to point and blame, to watch the Heights rise up in flames,” the poem reads, “No matter who you wish to shame. I will not play this little game.”

The late Chabad leader, Rabbi Menachem Schneerson is wistfully named as someone who could have quelled the dispute that is pitting Orthodox Jews against each other.

“Dear Rebbe how we long for you, to smile and show us what to do,” the poem goes on. “With just one wave of just one arm, to lift us up away from harm.”

Kravitsky said he wrote this poem to try to bring some levity to the dispute that is tearing through his home neighborhood.

He questions why some rabbis, who don’t live in the neighborhood, are weighing in on the dispute. “To live so far and preach ‘it’s good’ to paskan [rule] on OUR neighborhood?”

The poem appeared on Facebook on July 1 and now feels oddly prescient. Since then, a feud between Modern Orthodox newcomers and Hasidic Jews who have lived in Crown Heights for decades has reached a fever pitch. Modern Orthodox Jews erected a new eruv, but leading Lubavitcher rabbis, who say Schneerson forbade the enclosure, are fiercely denouncing it.

The Greater Crown Heights Eruv, as the enclosure is known, was vandalized twice in the last two weeks. A nearby eruv, serving Park Slope was also felled.

Schneerson, who died in the 1994, is said to have objected to building an eruv in Crown Heights, though his view on the eruv is also the topic of intense debate among Lubavitchers. As Schneerson anointed no successor, his word is rarely questioned. For years, Crown Heights has gone without the enclosure.

The poem is a humorous take on the controversy, but closes with a couplet worrying that the new eruv will “breed deceit” among Lubavitchers and a reference to the challenges of religious Jewish life outside Israel and divine redemption.

“A Crown Heights Eruv, no matter how neat, will only confuse — and breed deceit. But gollus [exile] is hard, it tires my feet. The streets are dark — so dark the streets. Please take my hand, two hearts one beat. Geulah [redemption] this way, and gollus [exile] complete.”