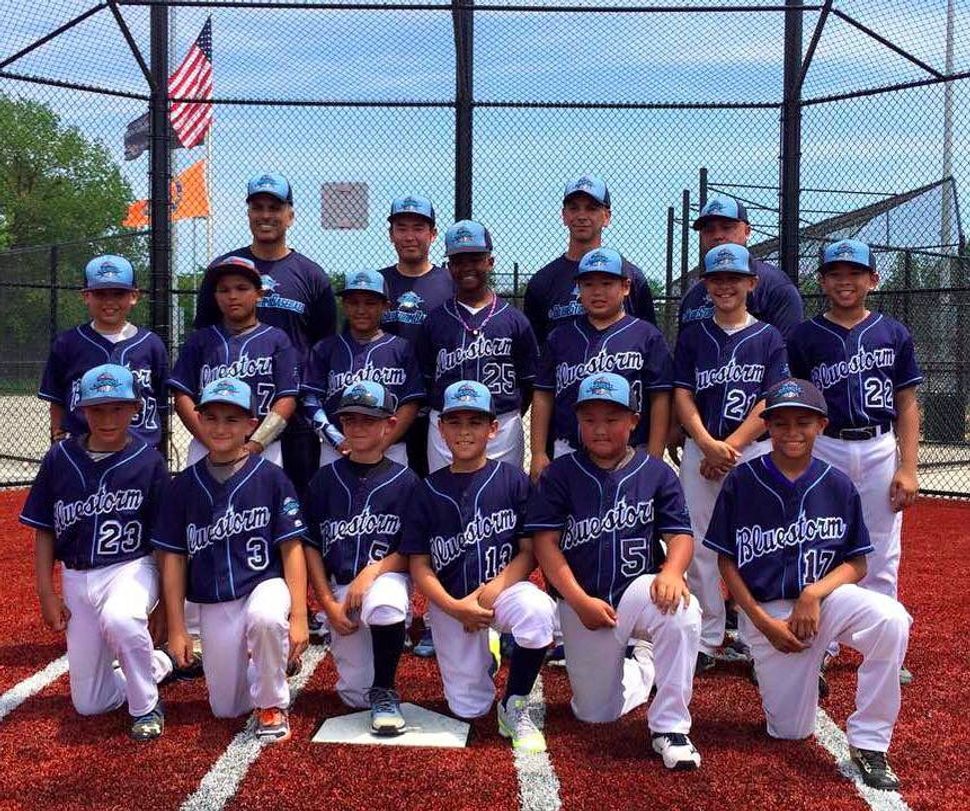 (JTA) — Jacob Steinmetz delivers the game’s final pitch on a heavenly Tuesday night, producing a neatly turned double play to wrap up a 10-0 victory for the Brooklyn Bluestorm team of 12-year-olds.

His teammates surround Jacob in congratulations in a scene familiar for the Bluestorm, which finished a perfect 24-0 in the Brooklyn Baseball League season and will be playing this month in the Elite World Series in Orlando, Florida. Jacob is batting .320 and strikes out half the batters he faces.

The diverse group of boys has embraced Jacob off the field, too, by easing his participation in the team’s frequent weekend tournaments.

Jacob, one of two Jewish players on the 13-member squad, is a religiously observant infielder and pitcher for whom motorized travel is forbidden on Shabbat. He and his father, Elliot, walk to Saturday games from hotels that are within three miles or so of the out-of-town tournaments’ fields. Even for local tournaments it’s more hotels and walking — the Steinmetz house in the heavily Jewish Five Towns area of Long Island is too far away for a walk to the field.

In each case, other players volunteer to take Jacob’s gear and food by car from the hotel so father and son have nothing to schlep on their treks.

On the last Saturday of July, at least half the players will go above and beyond at the Elite World Series, a showcase separate from the Little League Baseball World Series. They have asked their coaches to transport everything to the field so they can accompany the Steinmetzes on foot.

They’ll walk them back, too – this in the steaminess of Orlando and after one or two games of ultra-competitive travel-league baseball under the pounding Florida sun.

“It’ll be fun — not as lonely. It’ll be the whole team,” Jacob, who attends the Hebrew Academy of Long Beach, says of the walks.

As to their efforts already, he says: “It’s really nice that they go out of their way. It makes me feel they really want me there. They understand why I have to walk [on Shabbat], and they’re offering to help.”

The challenges prompt queries and suggestions, some of them comical.

Some parents and kids offer fanciful proposals for complying with the Shabbat restrictions, like hitching a wagon to a car’s back bumper or temporarily “abducting” him so he isn’t considered a willing traveler. When the Steinmetzes don’t eat during postgame dinners at non-kosher restaurants, the others wonder whether kosher food means it’s been blessed by a rabbi or God.

“It’s not necessary,” Steinmetz says of the efforts extended. “It’s nice. It’s not expected. The fact they even want to do it is heartwarming.”

Some of the goodness likely emanates from the all-for-one, one-for-all nature of team sports. And some comes from the Big Apple’s rainbow-like diversity – especially in Brooklyn, the borough nearly all the players call home, where being different is common and cultural quirks proliferate.

At a Sunday birthday brunch for a player on one of Jacob’s previous teams, the host’s parents had kosher food delivered, so the Steinmetzes wouldn’t eat alone. On another team, the first hotel the Steinmetzes stayed at for a Long Island tournament dispatched a shuttle van to the field with their food cooler and baseball equipment after learning that father and son would be walking.

One Bluestorm parent, Lynn Anderson, is a Lutheran who grew up in Sunset Park, a few neighborhoods from the field in the Gravesend section of Brooklyn. She remembers switching electrical appliances on and off on Shabbat for observant Jewish neighbors. Her late father, Alvik Kongevold, was a Norway native and a carpenter who serviced many Jewish clients.

Anderson’s son, Jakob, a Bluestorm pitcher, knows of tolerance firsthand: At the Catholic school he attends in Brooklyn, the boy is neither forced to receive Communion nor made to feel bad for abstaining.

“My parents always conveyed the message that if you can help someone, help them,” Anderson says. “Be generous, because it comes back tenfold.”

Kindness flows, too, from Tim Peguero, whose nephew, pitcher Danny Corona, was dominating early on this night.

“Getting along with each other – that’s what we were taught in our church,” Peguero says, his broad smile lighting up the dank left-field bleachers, his words nearly drowned out by the elevated F train’s rumble a block away.

Steinmetz had told the elder Corona and fellow coach Matt Digrigioli early on that “we don’t expect any changes” and that making it all work is “our problem, not yours.”

The efforts exerted, the offers extended, the tasks performed – all aim to benefit the quiet seventh-grader who loves baseball and hopes to earn an athletic scholarship to college.

The adults and kids say they respect Jacob’s commitment both to baseball and Judaism, and know the latter comes first.

The Steinmetzes’ example “displays how they enjoy their faith and how [Jacob] enjoys playing baseball. I find it impressive that they find a way to make it work,” says Devan Kodali of Manhattan, a center fielder and pitcher whose dad is an immigrant from India and whose mom is Syrian and Italian.

Says Devan’s father, J.V., of the Steinmetzes: “They’re showing the self-discipline and motivation to do both together.”