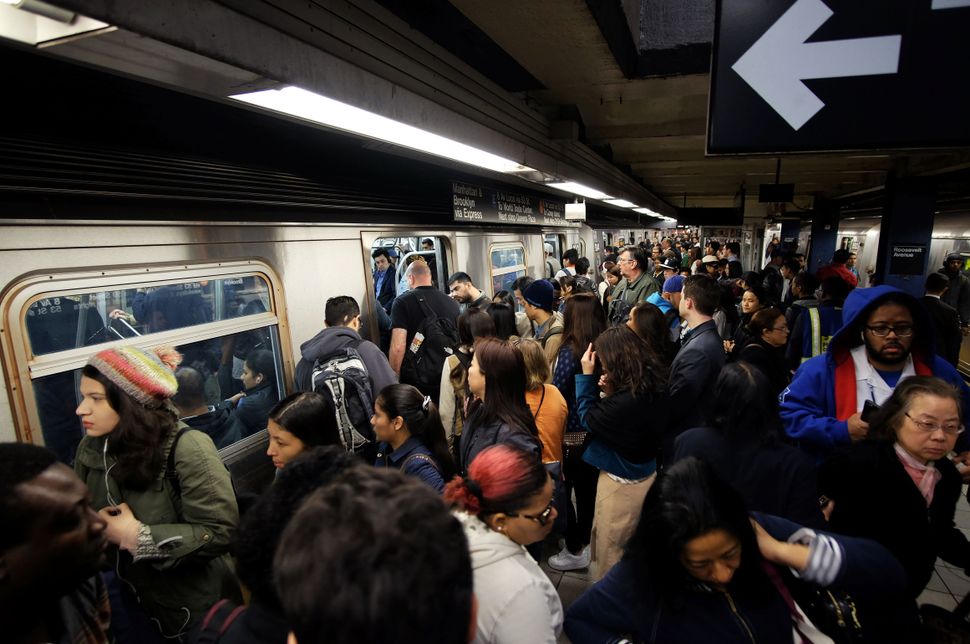 Gov. Andrew Cuomo announced on Jan. 3, 2019 that New York’s L subway line will not be shut down for 18 months after all. This will come as welcome news to the Satmar Hasidim who live in the Williamsburg section of Brooklyn, many of whom use the line. Here’s how the Forward covered the potential impact of the shutdown, especially on the real estate business.

Brooklyn’s trendiest neighborhoods are bracing for a city-planned transit meltdown in 2019, and that has some members of the Satmar Hasidic commmunity in Williamsburg worrying about their economic futures.

The L train, which cuts across Brooklyn from Canarsie to Williamsburg, will stop running into Manhattan for a period of 18 months beginning in 2019, New York’s Metropolitan Transit Authority announced July 25.

That’s caused well publicized panic among the young professionals who have recently moved to Williamsburg and Greenpoint. But it could also make life tougher for the Satmar Hasidim, who rely on Williamsburg’s booming real estate industry for jobs and income.

The MTA will use the 18-month shutdown to repair tunnels damaged during 2012’s Hurricane Sandy. In the meantime, the 225,000 people who ride the L train between Brooklyn and Manhattan each weekday will be forced to find new routes.

Williamsburg’s Hasidic community is based to the south of the L train stops, and members generally use the M and J trains to get into Manhattan. But the community is heavily invested in real estate along the L train corridor, and if transit nightmares are borne out, and real estate prices suffer, some worry that Satmar Hasidim could see their livelihoods threatened.

“A lot of Hasidic landlords own those rentals around the L, and they have a mortgage and taxes to pay,” said Isaac Sofer, a Satmar leader in Williamsburg.

The real estate website The Real Deal reported in March that analysts and observers expect major drops in rental prices once the shutdown begins. And the local news site dnainfo reported in mid-July that recent falls in Williamsburg condo prices could be due to the looming shutdown.

Many in the Satmar community rely on the real estate industry for work. Hasidic developers have been at the forefront of the neighborhood’s rapid transition from a warehouse district to a luxury travel destination, and in their wake they have brought countless members of their community into real estate and related fields, from development to property management and construction.

Those Satmar real estate professionals are employed throughout New York City, but the L train corridor is an important center, both due to its proximity to Hasidic Williamsburg and to its industrial past, in which earlier generations of Hasidim owned warehouses and factories there.

“In the Satmar community, a lot of young guys are in the construction industry,” said one member of the Hasidic community in Williamsburg who manages properties in north Williamsburg and spoke on the condition of anonymity. “Those guys are going to see less work.”

The Hasidic property manager said that the conventional wisdom in the Hasidic real estate community is that landlords will seek to retain tenants by stabilizing rents in the lead-up to the shutdown. He said that his colleagues expect Williamsburg residents to work from home more often.

“Brooklyn itself is becoming a thing, more than going into Manhattan,” he said. “That’s what they say, at least.”

A number of major new Hasidic-owned Williamsburg developments are underway or nearing completion. The unusually-proportioned William Vale Hotel, developed by Yoel Goldman and Zelig Weiss, is set to open next month just a few blocks from the L train stop at Bedford Avenue.

One New York City real estate investor, Jonathan Nachmani, told the Forward that that the properties at greatest risk from the shutdown are residential mixed used developments far from subway alternatives like the J and M trains. Buildings north of Metropolitan Avenue and into Greenpoint will be particularly inaccessible without the L train, he said.

Hasidic political leader Rabbi David Niederman, who leads the United Jewish Organizations of Williamsburg, told the Forward that he was concerned about the shutdown. “What hurts people in the Northside and Greenpoint hurts us as well,” Niederman said. “So we are very concerned about it. We have participated in meetings. We share the concern of our neighbors.”

Yet some observers are taking a more sanguine approach. “Yes, it’s an enormous inconvenience,” said Michael Tobman, a Brooklyn-based political consultant who works extensively with the Williamsburg Hasidic community. “However, when you build, whether it’s housing or big public works projects like subway upgrades, you’re building not for now and not for two years from now, but you’re building for five years, ten years, down the road. Everybody understands that this is work that needs to be done”