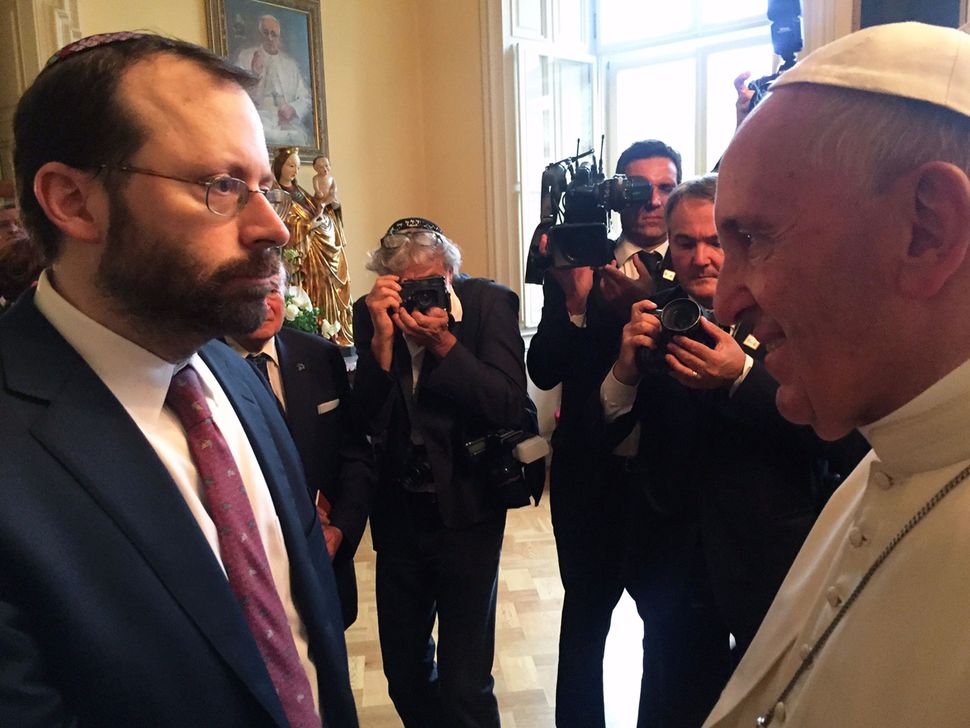 “Lost Tribe seeker” Michael Freund has criticized Pope Francis over the pontiff’s support for a Palestinian state, but the two met in Krakow on July 31 to speak about the relatively recent phenomenon of young Poles rediscovering Jewish family ties.

“Francis and Freund discussed how a growing number of young Poles are rediscovering their Jewish roots,” read a release from Freund’s organization Shavei Israel.

Shavei Israel seeks to bolster ties between Israel and isolated Jewish groups in countries including Spain, India — and Poland.

Last year, Freund criticized the Pope for meeting with Palestinian officials, saying the Catholic leader was aligning himself “against the Jewish people.” 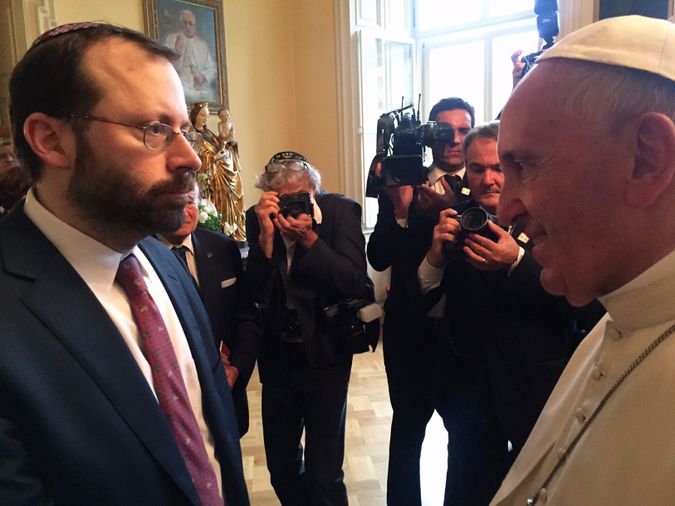 In a release about the meeting Shavei Israel did not address the past dispute and Freund did not immediately respond for comment.

“Pope Francis needs to realize that by recognizing the fictitious ‘State of Palestine’ he is aligning himself against Israel, the Jewish people and the bible itself,” Freund wrote in a May 2015 Jerusalem Post op-ed.

There are approximately 4,000 Jews registered as living in Poland, but Freund and his organization Shavei Israel believe there may be tens of thousands of others throughout the country who are unaware of their Jewish heritage.

In recent years, many young Poles have rediscovered Jewish family histories, as their country contends with both its Nazi and Communist past. Since 2004, when Poland joined the European Union, more Poles with Jewish backgrounds have been reclaiming property that was nationalized during communist rule.

Freund founded Shavei Israel in 2002 and is perhaps best known for his work with “Lost Tribe” groups, including the Bnei Menashe of India, a group that claims ancient Israelite lineage. Thousands of Bnei Menashe have immigrated to Israel with Shavei’s assistance and gone through formal conversions.

The organization has also been very active in Poland. “Ninety percent of Polish Jewry was annihilated in the Holocaust, and post-war Communist oppression caused many of Poland’s remaining Jews to flee,” the Shavei Israel website reads. “Those who stayed often had to hide their identities.”

Shavei Israel provides religious support for Poles who want to learn about Jewish history and bolster their observance of Judaism. The Israeli organization holds annual seminars on the the country’s “Hidden Jews” in Israel and Poland, and sends “emissaries” who may teach classes on religious observance, including facilitating in religious conversions.

Francis recognized a Palestinian state last May and also visited Israel’s Separation Wall, which divides the occupied West Bank from Israel proper, political gestures that raised the ire of some, including Freund.

Francis has said he acknowledges “the right of the State of Israel to exist and to flourish in peace and security within internationally recognized boundaries,” but also supports “the right of the Palestinian people to a sovereign homeland and their right to live with dignity and with freedom of movement.”

While Freund’s relationship with the Catholic leader has been strained, Shavei Israel has partnered successfully with Christian groups in the past.

Among those groups is the evangelical International Christian Embassy of Jerusalem. In that case, the evangelical group and Freund seemed to see share a prophetic vision of the Jewish ingathering in Israel.

The International Christian Embassy of Jerusalem helped fund the immigration of the Bnei Menashe to Israel, inspired by the group’s “longing for Zion.”